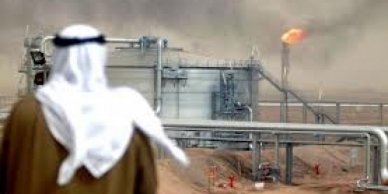 Was singing a new Saudi hastagha: If what we had oil, to express their views on the situation in the Kingdom by answering the question: what would be the case if Saudi Arabia did not have oil? The singing campaign came on Twitter is full of political overtones critical of the situation in the Kingdom. The campaign comes after a new study confirms that, in less than two decades, will not be able to export oil.

Other forecasts are issued in the year 2012 the Bank Citigroup ", asserts that Saudi Arabia has become a oil importer by 2030 if consumption of oil locally to increase by eight percent.

Saudi Arabia currently consumes all its production of natural gas, plan to use nuclear energy, but this is an inappropriate solution due to lack of experience.[/size

It is estimated that the Saudi reserves reached 265 billion barrels, Saudi Arabia continued to have the largest oil reserves in the world, announced it had increased reserves Venezuela certainly has to 297 billion barrels in January 2011.

But economists, within the Kingdom, theory, saying it is not based on accurate scientific studies.

Economists ruled out, within the Kingdom, oil depletion theory, as they are not based on studies on development minutes», head of the petroleum policies and projections Centre strategy Rashid abanumay commenting on the report, "Citigroup" that "this is greatly exaggerated because of several changes will occur in the oil States policy, but such studies are based on excessive consumption in the use of oil and petroleum, and is alert to the need for rationalization and domestic consumption being exceeded permitted levels."

He says singing "if we had oil to become one of the world's poorest countries without the Quran came down in our language we ignorant people! And the name of the country: Saudi Arabic altafranh

Someone said "some countries have oil and Aisha, oil is not the most important of a creator of the universe given Razek and here! they ancestors lived and died without oil".

Another said, "Although we did not promote quality and did not evolve even though officials awake and don't drink alcohol reverse developed nations that drink and loses her mind while this evolve."

In the same context one chirp "we are existence Hacene Ahan (even) as we imagine our country without him? Will not miss his only born in his mouth a spoonful of gold ".

And mocked the Saudi assistance singing some Arabic, and songbird said "without oil what we knew Morocco and Lebanon and Jordan and they know us, and what we hastagh salary enough hatching eggs were need Houbara Bustards".


[ltr]And went to Lebanon, where Songbird "If the oil, which has a March 14 and you have seen Saad Hariri or a barber shop accessories and kashira makeup."

But some said that Morocco and Jordan "were a donation to you billion."

Singing clerics criticized and said, "if we had what we had oil Jammeh.. He grew up to the smell of gasoline. "

And he hired singing "the announcer for King Abdullah, Sulaiman ISA (God bless him) sold tooth cleanser at the information Ministry. And the Mufti was light ytrzk incantation clinic and were the predecessors to the Salafist base money. "

No body of satire the singing, writing pending "if we didn't have oil for you saw body (the Commission) is herding the horses, donkeys, and stickers (logo) body, chasing opposite on icarly, and looking at adorned". And "the GMC auto body just hantor, sing and compose alhantor.. Atghtwa ".[/size

Songbird scoffed "I then in Sri Lanka cleaner, if my country and where oil and received the posts how if its oil."

Others scoffed, "if our country including oil we see in national geographic in the life of the Bedouin, our homes are tents, we start school pussy, if the school originally."

In the same context another scoffed "I been riding horseback javadi was going to the people, and the people were demanding his share of alnyak".[/size

Turning to criticism of the internal political situation, he said, if we didn't have Songbird oil for our clean government was elected and was the name of the country, starting with (Republic) and ends with (Democratic) as known in America, we will. "

Another said "if we have oil, we have our revolution to our dignity as they (kharba kharba) since there was a political prison, and discrimination between citizens" by "Arab online".

Captured a Saudi women a share of Tweets, and singing "if we had to use the car without oil to accuse us of corruption, and blessed us with a guest and no one told us to retreat."

He predicted that conditions will be singing some of the powerful in the State, and one of gradate "if our oil for the long Princess (wife of Alwaleed Bin Talal) exude camels all lice, and the jewel in eteka run manfuha, and every marriage takes 5 riyals."

And mocked the Songbird "and Manal Al-Sharif (the girl led her car, arrested) shopping-HP, and no one is telling her something; or treatment on the camel and says: we give freely."


► In less than two decades, Saudi Arabia will be able to export oil


And born Songbird "and our neighbour was Prince DOE, sends us the son, beats the door back and says: my Mom sent me says hat from our neighbours lghadana onion!"


And "Prince * * * steals sheep; the other farmer steals the crop."


He said activist "if we had oil as we heard trivh (ironically) the world (have oil and waiting for the charity incentive, and blow Saher, and otherwise was evacuate Ibrahim Assaf (Minister of Finance) Ministers to feed, and I saw all the Ministers ythaoshon weibon (want) post."

Another wrote, "if what our oil for the tribe's second speech, and what was their role limited to festivals and poetry and the exposure, or the guardian lmsayin camel, camel price of five million riyals."


While commentators had it not been for the oil of Saudi Arabia was divided into "mean Oriental State; and the State; and the Hijaz as well. The South will be of Yemen. "


And the "revolution" on some tweets, as some said "if what our oil, was settled (our) revolution, interfered with the Gulf States and the Gulf initiative for a settlement."


Some said "if we had oil we oil for generations to come."