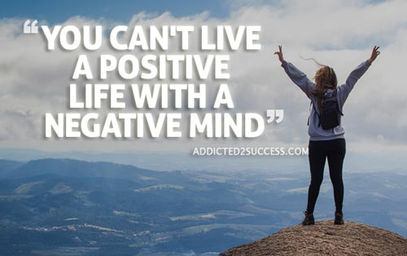 
Jesus said, Go; it shall be done for you as you have believed.
—Matthew 8:13


Sometimes when I stand behind the pulpit, and before I speak, I pause and my gaze sweeps across the audience. I look at the faces of the people. I love to see the bright smiles and expressions of anticipation, but there are always a few who look downtrodden and discouraged. I don't know anything about them and I don't want to judge them, but their faces look sad. They look as if they have lost hope and expect nothing positive to happen and too often, they get exactly what they expect. I understand those discouraged people; I was once one of them.


Here's a simple fact I've learned: Positive minds produce positive lives, but negative minds produce negative lives. The New Testament tells the story of a Roman soldier whose servant was sick, and the soldier wanted Jesus to heal him. That wasn't uncommon; many wanted Jesus to heal them or their loved ones in those days. But this soldier, instead of asking Jesus to come to his servant, expressed his belief that if Jesus would just speak the word, his servant would be healed (see Matthew 8:8). Jesus marveled at his faith and sent out His word to heal the servant. The soldier's positive mindset his faith brought positive results. He expected healing, and that's exactly what happened.


Too often, we cry to Jesus to heal us, to take care of our finances, or to deliver us from problems, but we don't fully expect the good things to happen. We allow our minds to focus on the negative aspects. Doubt and unbelief war against our minds and steal our faith if we allow it.


As I wrote in my book Battlefield of the Mind, many years ago I was extremely negative. I used to say that if I had two positive thoughts in a row, my mind would get in a cramp. That’s an exaggeration, of course, but that’s how I saw myself. I lived with the same philosophy that other people have: If we don't expect anything good to happen, we won't be disappointed when it doesn't.


I could have excused my negative attitude by telling everyone about my disappointments in life and I had many. It wasn't just my lack of expectation. It was more than that. Because I thought negatively, I spoke negatively. When people told me of their spiritual victories, I'd think, That wont last. When people spoke of their faith, I'd smile, but inwardly I would think that they were gullible. I could always figure out ways that plans would go wrong or people would disappoint me.


Was I happy? Of course not. Negative thinkers are never happy. It's too long of a story to explain how I came to face that reality, but once I realized what a negative person I was, I cried out to the Lord to help me.


I learned that if I kept studying the Word of God, I could push away negative thoughts. God's Word is positive and up¬lifting. My responsibility was to become the kind of believer who honors God with her thoughts, as well as with her actions and her deeds.


I understood the remorse David must have felt when he wrote Psalm 51: Have mercy upon me, 0 God, according to Your steadfast love ... is the way he starts. I especially meditated on verse 9: Hide Your face from my sins and blot out all my guilt and iniquities. I hadn't sinned the same way David did, of course, but my negative thinking and bad attitude was sin. It wasn't just weakness or a bad habit. When I focused on negative thinking, I was rebelling against God.


The Lord had mercy on me. As I continued in His Word and in prayer, He freed me from Satan's stronghold. Freedom is available for all of us.
Gracious God, thank You for every deliverance in my life. Thank You for setting me free from negative and wrong thinking. Thank You for defeating Satan in this area of my life. Amen.
*****************