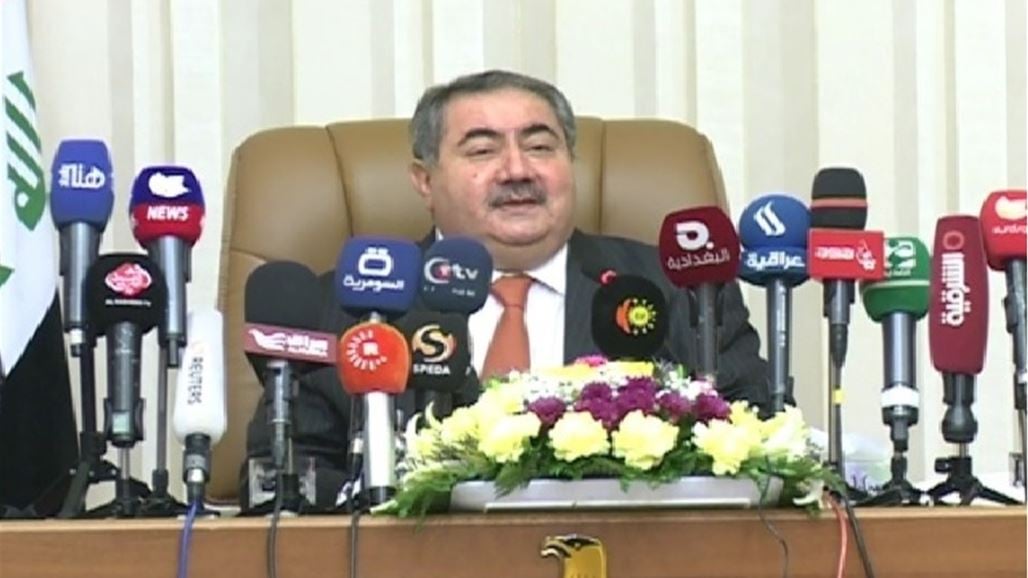 Alsumaria News / Baghdad
confirmed the Ministry of Finance , on Monday, that the next year's budget is not the prosthesis, noting that it will be taxed on some basic sales, while showed that the defense budget constitutes 22% of the budget of the Iraqi state . He said Finance Minister Hoshyar Zebari said at a press conference in the ministry building and attended "Alsumaria News", "budget next year that was sent to the House of Representatives and read the first reading is a realistic budget and not a prosthesis after it has been retrenchment and reducing the existing deficit," reassured that "Iraq not accustomed to expose the bankruptcy or economic collapse in the light lower oil prices. "

Zebari said that "terrorism, which exposed him Iraq Daash and extend, economic damage and the money looted from financial institutions and banks, with lower global oil prices push the ministry to think and search for new revenue to the state treasury by imposing some taxes, "noting that" the tax will be imposed on sales basic such as automobiles and the Internet networks and Kartat shipping cards and travel and other other things. " He said Zebari said "there directives also the ministries of electricity and the Secretariat of Baghdad and other other institutions for the collection of revenue from fares water, electricity, sanitation and hygiene, which is applicable in all countries of the world. " , pointing out that "the tax will not affect the rights of the poor from social welfare and salaries of employees of middle-income people and will be charged saving on staff who will increase their salaries for one million and 500 thousand dinars salaries." He continued, Zebari said "next year's budget was calculated on the basis of price per barrel $ 60 and the export of 3.3 million barrels per day and oil revenues amounting to 84.2 trillion dinars non-oil and 15.6 trillion dinars, while total operating expenses 80 trillion dinars and investment 45.2 trillion dinars and a deficit of 23 trillion dinars, "explaining that" the deficit will be funded Internally, inter alia assets retained from 2014 of the Special Drawing from the International Monetary Fund's rights and versions of foreign bonds and the issuance of public debt bonds, in addition to loans and remittances treasury of Trade Bank of Iraq. " Among Zebari said that "the Department of Defense budget has allocated nearly 23 to 23% of next year's budget because there are payable military contracts, including the F-16 aircraft, in addition to the face of terrorism and displaced persons who have reached 2.1 million displaced people, "adding that" grades for next year and distributed by the basic need for each ministry, including the Ministry of Health, Interior and Defense and Education and Higher Education. " He said Zebari said that "the province's budget, amounting to 17% of the budget is deducted, including the revenue obtained from the border ports of the region." It is noteworthy that the Council of Ministers approved, in (December 23, 2014), the adoption of the draft general budget for the 2015 law, The total Hjhma 123 trillion dinars, while the House of Representatives ended the first reading of the law during its meeting held on Thursday the 25th of December the current first.

LINK
Finance: the budget next year is not prosthesis and we will impose taxes on some basic sales

Similar topics
» WEightings to impose taxes on Public services such as electricity, water and fuel to meet the budget deficit
» Taxes: We tried to impose taxes on malls and salons but they were canceled because of the lack of cooperation of citizens
» US Treasury: Daash bankrupt and impose more taxes
» Parliamentary Finance: How to impose taxes on retirees while they have already paid them with service
» Government efforts to impose new taxes and warnings of high recession rates

Page 1 of 1
Permissions in this forum:
You cannot reply to topics in this forum
Who is online?
In total there are 60 users online :: 0 Registered, 0 Hidden and 60 Guests :: 4 Bots