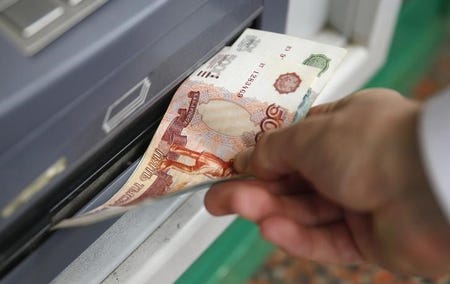 MOSCOW (Reuters) - Russia's ruble strengthened on Friday after Finance Minister Anton Siluanov confirmed his ministry had sold foreign currency and on expectations that exporters will step up dollar sales.

At 8:15 a.m. GMT (03:15 a.m. EST), the ruble was around 2.7 percent stronger against the dollar at 59.85 and gained 2.7 percent to trade at 73.65 versus the euro.
The ruble's recovery is in contrast to intense selling pressure earlier this week, when the ruble at one stage had fallen about 20 percent against the dollar on the day before rising again, threatening the relative financial stability on which President Vladimir Putin has built his popularity.

Analysts at Rosbank said that given what they saw as the central bank's conservative approach to rouble liquidity, the expansion of its forex repo mechanism and policy of preserving its reserves, the rouble could stabilize at around 60 to 62 rubles per dollar.
Russian government efforts to put pressure on exporters to not hoard their forex revenues are seen as another positive for the Russian currency, which is down some 45 percent against the U.S. currency this year.

The end-of-month tax period begins in earnest next week, when Russian exporters have to convert their overseas earnings into rubles to pay taxes to the state budget.
Siluanov said early on Friday that the rouble would definitely firm at the beginning of next year. His verbal interventions are seen as part of government efforts to talk up the Russian currency.

The central bank has spent over $80 billion defending the currency so far this year amid a collapse in oil prices and Western sanctions over Ukraine that have dented investors' appetite for Russian risk.

The bank has scaled back its support for the rouble since last month, however, when it floated the currency.

Meanwhile they blame everybody but themselves for their problems ... It could not possibly be due to their ineptness, rampant corruption and lack of effective action to change things ...

Putin says Russia economy will be cured, offers no remedy

By Timothy Heritage and Alexei Anishchuk

(Reuters) - President Vladimir Putin assured Russians on Thursday that the economy would rebound after the ruble's dramatic slide this year but offered no remedy for a deepening financial crisis.

Defiant and confident at a three-hour news conference, Putin blamed the economic problems on external factors and said the crisis over Ukraine was caused by the West, which he accused of building a "virtual" Berlin Wall to contain Russia.

At times sneering, at others cracking jokes, he ignored pressure to say how he will fix an economy facing what his economy minister calls a "perfect storm" of low oil prices, Western sanctions over Ukraine and global financial problems.

The ruble has fallen about 45 percent against the dollar this year, and suffered particularly steep falls on Monday and Tuesday, but Putin refused to call it a crisis and said it would eventually rise again.

"If the situation develops unfavorably, we will have to amend our plans. Beyond doubt, we will have to cut some (spending). But a positive turn and emergence from the current situation are inevitable," Putin said in comments to a packed conference center that were broadcast live to the nation.

Although he said the recovery might take two years, much will depend on how long the West maintains sanctions on Russia over its role in the Ukraine crisis.

But Putin showed no sign of heeding a call by EU foreign policy chief Federica Mogherini for "a radical change in attitude toward the rest of the world and to switch to a cooperative mode".

Sitting at a big desk in front of two large screens showing close-ups of his face, a white mug with a presidential crest on beside him, Putin appeared mainly intent on showing Russians he is in command and will not kow-tow to the West.

The former KGB spy said Russia must diversify its economy to reduce dependence on oil, its major export and a key source of state income, but he gave no details and has said many times during 15 years in power that he will do this.

The rouble slipped as he spoke, and was about 2 percent weaker against the dollar on the day. The central bank increased its key lending rate by 6.5 percentage points to 17 percent on Tuesday, and has spent more than $80 billion trying to shore up the rouble this year, but to little avail.

Although Putin said the central bank and government had acted "adequately", he chided the bank for not halting foreign exchange interventions sooner, suggesting more decisive action might have made this week's big rate rise unnecessary.

"All this implies pretty big divisions within the administration as to how to react to the crisis and pressure on the rouble," said Timothy Ash, head of emerging market research at Standard Bank in London, adding that heads could roll.

"Whatever happens, a deep recession now looms," he said.

Putin's popularity has soared over the annexation of Crimea but the ruble's decline could erode faith in his ability to provide financial stability, an important source of his support.

An opponent, former Prime Minister Mikhail Kasyanov, said problems would mount as prices are expected to surge next year and Putin would need "an exit strategy" to leave power.

But Putin said he felt the "support of the Russian people", though he had not decided yet whether to seek a new six-year term in an election due in 2018.

Asked about Ukraine, where Russia has irked the West by backing pro-Russian separatists fighting in two eastern regions, Putin said Moscow wanted a political resolution to a conflict that has killed 4,700 people.

He also called for "political unity", suggesting he does not intend to annex the regions that have rebelled, and avoided calling them "New Russia", a phrase he has used in the past.

But he blamed NATO for the worst relations between Moscow and the West in decades.

"Didn't they tell us after the collapse of the Berlin Wall that NATO would not expand eastwards? But it happened immediately. Two waves of expansion. Is that not a wall? ... It's a virtual wall," he said.

Similar topics
» Abdul-Mahdi: We aim at the truth and realism through the conduct of the general population census
» Finance Minister: The government wants to expand cooperation with countries of the world, including Russia
» Minister of Trade confirms achieving advanced achievement rates in implementing the government program
» Abdul-Mahdi: I will lift the parliament request for my resignation
» President Assad: Russia not Western intervention greatest impact at the start of the collapse of the «Daesh»