This is the latest being hyped -- ZIM showing as live at .13

This is the latest being hyped -- ZIM showing as live at .13

This is the latest being hyped up in DinarLand.... ZIM showing as live at .13

I believe this is that same XE site that always has BOGUS IQD rates on it also. 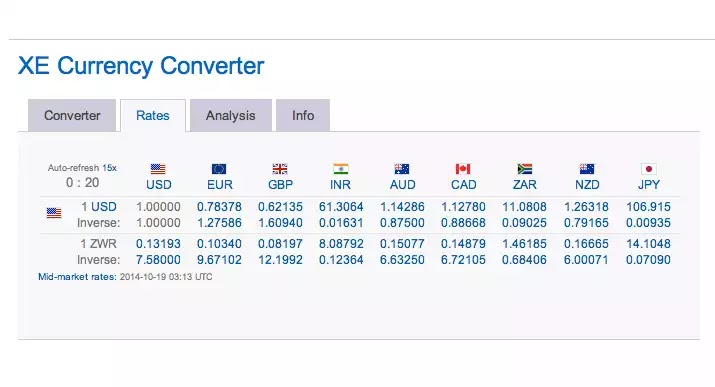 Re: This is the latest being hyped -- ZIM showing as live at .13

Re: This is the latest being hyped -- ZIM showing as live at .13

I suspect it is faked/bogus. Number one, the correct ISO code for the Zimbabwean Dollar is ZWD. There is NO ZWR listed in any pairs at XE.com, although if you do a search on Google, you will find a link. I suspect it is just an old page.

Number 2, when you look up the ZWD on XE.com it is asterisked with the following warning:

Last, but not least, the ZWR was the code used for the third Zimbabwean Dollar which was replaced by the fourth in 2009 at a trillion to one exchange rate and was scheduled to be demonetized in July, although the total abandonment of the Zimbabwean currency before that made it a moot point.

Page 1 of 1
Permissions in this forum:
You cannot reply to topics in this forum
Who is online?
In total there are 94 users online :: 0 Registered, 0 Hidden and 94 Guests :: 1 Bot