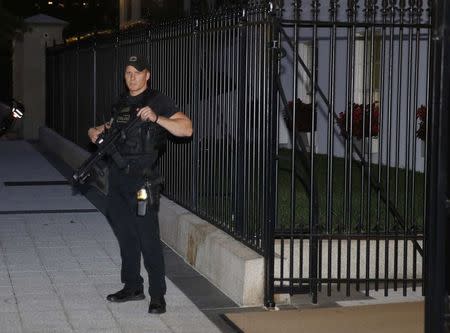 An armed U.S. Secret Service agent with an automatic rifle guards the White House complex during an evacuation over a security alert moments after U.S. President Barack Obama and his family left for the presidential retreat, Camp David, in Maryland, September 19, 2014. REUTERS/Larry Downing


WASHINGTON (Reuters) - The Texas man accused of breaking into the White House while armed with a knife is a U.S. military veteran who was decorated for his service in the Iraq war, the U.S. Army said on Sunday.

Omar Gonzalez, 42, is expected to appear in court in Washington on Monday facing a charge of unlawfully entering a restricted building or grounds while carrying a deadly or dangerous weapon. If convicted, he faces up to 10 years in prison.

The U.S. Attorney's Office said Gonzalez was carrying a folding knife with a 3-1/2-inch-long (9-cm-long) serrated blade when he climbed a fence and made it into the White House on Friday night after President Barack Obama had departed.

According to an affidavit released by prosecutors, Gonzalez told a U.S. Secret Service agent after he was apprehended that "he was concerned that the atmosphere was collapsing and (he) needed to get the information to the President of the United States so that he could get the word out to the people."

The incident was one of the most significant breaches since Obama became president in 2009 and raised questions about security procedures at the White House, a heavily guarded complex filled with Secret Service officers and snipers.

According to the Army, Gonzalez, who had the rank of sergeant, enlisted in July 1997, listing his home as Puerto Rico, and was discharged in September 2003 after completing his service obligation. He re-enlisted in 2005 and retired on disability from the Army in 2012.

Gonzalez served in Iraq from October 2006 to January 2008, receiving decorations including an Iraq Campaign Medal with two campaign stars.

During his first enlistment, he served with the 10th Cavalry Regiment, 2nd Brigade, 4th Infantry Division at Fort Hood, Texas. Postings during his second enlistment included Joint Base Lewis-McChord in Washington state and Fort Hood.

A second man was arrested on Saturday for trespassing at the White House after approaching the White House gates on foot, being sent away and then returned in a vehicle, the Secret Service said.

The agency has increased security around the White House following the security breach and started a review of its response.