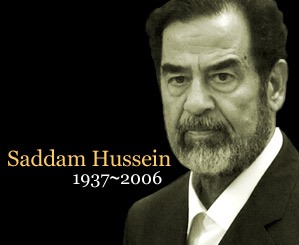 Saddam Hussein was captured 10 years ago today, it makes for what should have been a landmark anniversary in despise of the revered leader.


It’s actually bitter sweet, at the time of the forthcoming American occupation the idea of removing Saddam Hussein from power was actually not a bad one. We knew he was a dictator and that we could do better, so the idea of him being removed sounded great.
How wrong were we?


Saddam Hussein was by no means an angel, we get that – but as a normal person going about your day to day business, what do you want? We want clean streets, clean drinking water, food supplies, jobs, housing, electricity, education and above all to be able to live a normal life without fear.


Clean Streets
Not a priority anymore, sanitation is important but we will accept to live in a dirty street so long as our family remains alive and prospers although isn’t it all connected? After all if you don’t have clean streets and a functioning sewage system then nasty diseases spread.


Clean Drinking Water
Some families have been forced to drink, wash and clean with the river water. Children are sick with diarrhoea but have no option. They cannot live without water. Existing water networks have also suffered from lack of maintenance or by being destroyed during the war.


Food Supplies
Even the food supply network is at risk due to dwindling security situation. Trucks driving food supplies into the country are facing the bandits on the roads who are interested in stealing from just about anyone. A country with two great rivers should have been the biggest exporter in the world.


Jobs
Poverty and unemployment rates are decreasing in Iraq after Iraqi GDP improved and investment in constructions and services projects increased however we must keep this as a priority as having a job often eliminates a lot of other problems within the household.


Housing
It is estimated 2.5 million homes are needed by 2016 though recent reports suggest only 5% of that figure will be achieved. In Baghdad we are seeing properties come onto the market priced at $1 million and above. The reason for the high price is simple – some areas are safer than others. As a Sunni or a Shia you must choose your area carefully, sad isn’t it?


Education
Education has to be a priority; we must engage the youngsters of Iraq and ensure they are the leaders we want them to be. With proper education we can ensure that Iraq does not remain where we are today in just 50 years’ time for our children are our future leaders.
Life under Saddam Hussein was actually pretty simple – keep yourself to yourself and do not speak badly of the government and in return you are on to a fruitful life.


As a human being, a father, a mother you want to provide for your children, modern day Iraq 10 years on does not allow for such things. It saddens me to say that I know many of my friends left Iraq never to return, families split apart dreaming of a day that is safe for them to have their reunion.


The real price of war is the normal everyday Iraqi going about his business to make ends meet. He/she is not interested in the arms race or the oil sales, he/she just wants to live a normal peaceful life without the fear of being killed.


Every time we go out we live in fear of being kidnapped, fear of the car next to you exploding whilst at the checkpoint, fear of some crazed lunatic blowing himself up whilst out buying some vegetables at a market.


Knowing a few people who have been kidnapped for ransom, I know too well what this does psychologically to the family and friends of the person who was in most cases violently possessed for some money.


I often wonder who the terrorists are. Are they just thugs and gangs waging a war of terror for capital gain? Are they merely interested in bettering their bank balance or is this some sort of holy war? The Americans have gone and for example, the November death toll was almost 1,000 and 2013 is the deadliest year since 2008.


Living in fear is so scary I wouldn’t wish this on my worst enemy. I feel blessed to live another day let alone another 10 years.


It puzzles me, for I am interested in one thing, normality! Not looking for my fellow Iraqi’s to be driving Ferraris up and down Sadoun Street, just want to see children smiling and parents happy because they can provide the basics.


Under Saddam Hussein, many Iraqis lived in fear, not just of their leader but of outside forces, especially Iran, from whom only Saddam Hussein could protect them — a common strategy he used to maintain power.


In conclusion we have to look at past, present and the future. In hindsight we would have said no, leave him in power as life is at least 100 times worse 10 years on. Iraqi’s are not asking for hand outs – we are simply asking for a hand up.


However in true Arab style we remain optimistic that something good eventually comes from our shockingly sad situation, the only question that remains is, when?