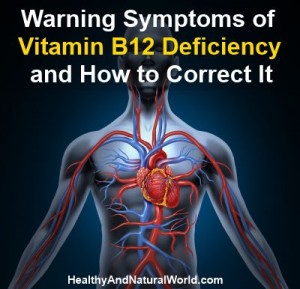 According to recent research, one in every four adults in the United States suffers from vitamin B12 deficiency. This vitamin is dubbed the energy vitamin and its shortage can result in an array of health problems, including some potentially very serious conditions. Despite being a water-soluble vitamin, B12 gets stored in your liver, kidneys and other body tissues, so the deficit can go unnoticed for a number of years. That is where the danger lies. By the time the condition gets detected, there might be some irreversible damage done already.


B12 is important for the functioning of the nervous, digestive, vascular and reproductive systems. It regulates hormone production, supports a healthy immune system, builds the red blood cells and DNA. It is connected with your cognitive abilities and mood stability. Its influence spreads all the way from being happy to passing on your genetic material. So I’m sure you’ll agree that it’s a good idea to be on the lookout, and spot the minefield before it explodes.

The causes of vitamin B12 deficiency
You get B12 deficiency because you are either not consuming enough vitamin B12, or you are unable to absorb it. As B12 appears mostly in animal products, strict vegetarians and vegans are among those at risk of developing the condition. So the first thing to look at is your diet. If you are a vegetarian or a vegan you should read my post about the 6 important things to remember in vegan diet.

Diet Lacking in vitamin B-12
The major food sources of B12 are meat, fish, dairy products and eggs. By eating a balanced omnivorous diet, you should get enough of this vitamin the natural way. If this doesn’t happen, you can develop anemia, which means that you have less red blood cells – these carry oxygen to the cells and in this way support the metabolism that provides energy for all of the body’s functions. You may also develop anemia due to iron deficiency and you can read my other post about the top signs of iron deficiency and how to increase iron levels in your blood.

Impaired Absorption
If you are not absorbing vitamin B12, the reason for that can be anything from stomach problems to auto-immune conditions. You’re also more likely to be vitamin B12 deficient if you are over 50 – when we get older, our absorption is not optimal any more due to the lack of stomach acid. Food has difficulty getting absorbed if you are suffering from ulcers, Crohn’s disease, celiac disease, gastritis, or if you had a section of your gut surgically removed. The latter can be a part of a weight-loss surgery. Certain prescription drugs can affect your ability to absorb vitamin B12, including anti-ulcer drugs, antacids and Metformin – a drug taken by diabetic patients.

A very common cause of B12 deficiency is also pernicious anemia. This auto-immune condition is marked by a lack of a protein known as the intrinsic factor, which is needed for the absorption of vitamin B12.

Other reasons include overindulgence in coffee (more than four cups per day reduce your vitamin B12 levels), bacterial infections and exposure to nitrous oxide AKA the laughing gas.

Symptoms of vitamin B-12 deficiency
The symptoms are often not very specific, so vitamin B12 deficiency can go unnoticed for a long period of time. It is also easily mistaken for other conditions, and therefore remains misdiagnosed. A careful interview and a blood test are required. You are considered to be B12 deficient if your concentration of vitamin is less than 150 pmol/L. If you are between 150 pmol/L and 200 pmol/L, the serum MMA (Methylmalonic Acid) is also checked to establish the need for further investigations. B12 is scientifically known as cobalamin, so this name is sometimes used to describe the condition or its cause.

The most common symptoms include:
- fatigue and lack of energy
- shortness of breath
- headache
- cognitive problems, such as memory loss and difficulty concentrating
- pale or yellow skin (jaundice)
- stomach upset and weight loss
- changed sensation in the limbs (pins and needles, desensitization)
- muscle weakness
- mood swings
- dry mouth
- ringing in the ears (tinnitus)
- difficulty sleeping – B12 affects the production of melatonin which is known as the ‘sleep hormone’
- white nails may also be a sign of anemia – read here for more information.

In severe cases it can lead to depression, psychosis or dementia. The symptoms can develop gradually and intensify over time. Since B12 is involved in so many of the body’s functions, the lack of it can lead to numerous life-threatening conditions. Reduction in B12 has been linked to cardio-vascular disease, cancer, stroke and birth defects.

How do you prevent and treat it?
We should get 2.4 micrograms of vitamin B12 per day. As mentioned before, the easiest way to prevent vitamin B12 deficiency is by eating the right food. Different meats, sea food, milk and eggs all contain it. If you eat meat and seafood, check its origin and support organic and free-range options.

Vegetarians and vegans have to make sure that they get enough of this vitamin. The non-animal options include consuming nutritional yeast and vitamin B12 fortified products, such as B12 fortified almond milk and cereals, and some brea


There has been some controversy around eating cereals, as they are often highly processed and are packed with sugars. They are not considered healthy and are best replaced with oats and oatmeal. Tempeh (one of my top 10 fermented foods), miso and seaweeds have also been reported to contain B12.

A very good source is also spirulina – a high-protein super food that is made of two species of blue-green algae. Spirulina has a very high nutritional value and contains 60% proteins, so it’s perfect for strict vegetarians.  Spirulina is a rich source of nutrients and antioxidants, such as beta carotene, selenium, zinc, iron and vitamins C, E and B complex. Eating seaweeds in general has great health benefits which I men


If you cannot get enough of vitamin B12 through nutrition, you will have to start taking B12 supplements and B12 containing multivitamins. In severe cases, you might need vitamin B12 injections. This is also the case for people suffering from pernicious anemia.

Similar topics
» Symptoms of COPD
» 13 Symptoms of a TOXIC LEADER -- Does this sound like someone we know?
» DID YOU KNOW???!!! DO YOU KNOW About Vitamin D deficiency ?
» 12 Common Diseases Caused by Vitamin D Deficiency
»  Samarra plans to produce vitamin C and zinc soon

Page 1 of 1
Permissions in this forum:
You can reply to topics in this forum
Who is online?
In total there are 62 users online :: 0 Registered, 0 Hidden and 62 Guests :: 4 Bots