Record Highs. Thursday's extremely modest 2.5-point gain in the S&P 500 pushed the index to an all-time high close. The MSCI index of world shares is just off its record high. And all of this comes amid heightened turmoil in Iraq, which has triggered a rally in oil prices. "The goldilocks scenario of low rates and a slowly improving economy continues, with markets unmoved by continued geopolitical concerns," said CMC Markets' Michael Hewson.

Oracle Misses. Shares of Oracle are down 6% in pre-market trading after a disappointing quarterly earnings announcement. In fiscal Q4, the software company booked adjusted EPS of 92 cents and revenue of $11.3 billion.  Analysts were expecting 95 cents per share on $11.48 billion in revenue.

Carl Icahn Wants Family Dollar To Sell. In a letter disclosed in a new SEC filing, activist investor Carl Icahn is urging Family Dollar to put itself up for sale. "[I]t is imperative that Family Dollar be put up for sale immediately," he wrote. "[A]n overwhelming majority of the company’s shareholders would be in favor of a sale." The stock is up 2.5% in pre-market trading.

Smith & Wesson Misses. Shares of Smith & Wesson are down by 11% in pre-market trading after the company issued disappointing guidance in its latest earnings announcement. Management expects to earn between $1.30 and $1.40 per share in fiscal 2015, which is well below the $1.50 expected by analysts. Sales guidance of $585 million to $600 million was weaker than the $621 million expected.

Siemens-Mitsubishi Raises Their Offer. Siemens-Mitsubishi and General Electric have been playing leapfrog in their efforts to buy out the energy business of French conglomerate Alstom. "Responding to a new GE bid on Thursday aimed at appeasing French political concerns, Siemens-MHI simplified the structure of its offer and raised its cash component by 1.2 billion euros ($1.64 billion) to 8.2 billion," reported Reuters' Mark John and Maria Sheahan.

Revel's Second Bankruptcy Filing. Revel, the extremely ambitious $2.6 billion Atlantic City casino, has filed for bankruptcy again.  "In warning letters given to employees and obtained by The Associated Press, Revel said it is seeking a buyer for the struggling $2.4 billion casino, but can't guarantee one will be found," AP's Wayne Perry. "If not, employees could be terminated as soon as Aug. 18, Revel said in the letter."
No data. Unfortunately for those who love economic news, there's no major data scheduled for release today.

Yellen Torpedoed Volatility With One Word. Investors, traders, and economists have been worried that some of the recent economic data would encourage the Federal Reserve to tighten monetary policy sooner than later. But during her Q&A on Wednesday, Fed Chair Janet Yellen said the recent data was "noisy," a characterization that Morgan Stanley's Matthew Hornbach called "biggest surprise of the FOMC press conference." Here's Hornbach: "The Fed’s characterization of recent inflation readings as “noisy” and the preponderance of evidence to the contrary leave us feeling as if the Fed is likely to dismiss most economic data deviations from slower-moving trend processes. Under the “dismissive” framework, implied market volatility should increase less for a given economic surprise than under our previous framework – a “reactive” framework based on the idea that the Fed would be more data dependent."

Brian Moynihan Is Pulling A Jamie Dimon. "Representatives of Bank of America Corp have asked U.S. Attorney General Eric Holder to meet with Moynihan, its chief executive officer, in an attempt to resolve differences over a possible multibillion-dollar settlement involving shoddy mortgage securities sold by the second-largest U.S. bank and its units, according to people familiar with the negotiations," report Reuters' Karen Freifeld and Aruna Viswanatha. "Dimon, the CEO of JPMorgan Chase & Co, took a much-ballyhooed trip to Washington in September to meet with Holder in an effort to close a deal that would allow the largest U.S. bank by assets to put its mortgage securities problems behind it."
***

BONUS: Goldman Sachs' David Mericle has a new note out on inflation highlighting the impact of shelter.

"Shelter inflation — consisting mainly of rent of primary residence and owners' equivalent rent (OER) — accounts for over 40% of the core CPI ... The largest component is OER, a measure of imputed rent on owner-occupied dwellings based on data on similar rental units. Housing plays a much smaller role in the PCE price index, where the analogous categories account for less than 18% of the core. 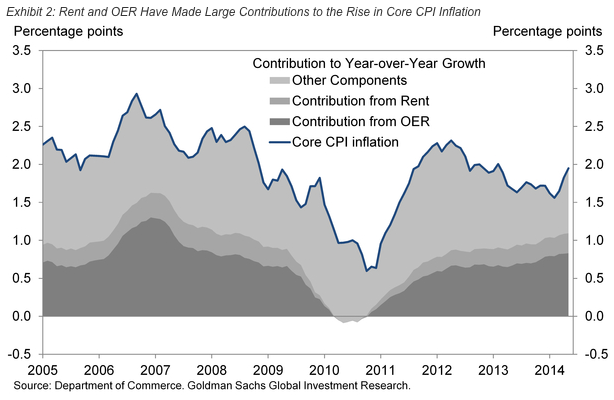 Page 1 of 1
Permissions in this forum:
You cannot reply to topics in this forum
Who is online?
In total there are 68 users online :: 1 Registered, 0 Hidden and 67 Guests :: 2 Bots