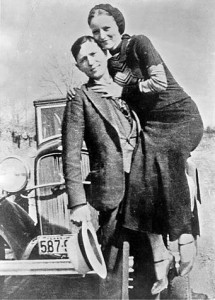 This month marks the 79th anniversary of the deaths of notorious crime duo Bonnie and Clyde on May 23, 1934. The young gangsters in love tore across the American Southwest during the Great Depression, leaving a trail of robberies and murders.

Newspapers demonized Clyde Barrow and his “gunwoman” Bonnie Parker as “notorious desperados” and “dangerous killers,” so the following six facts might surprise you.


1. Although Barrow and Parker claimed to be married, Parker remained legally married to her first husband, Roy Thornton. On the day she died, she still wore his wedding ring and bore a tattoo on her knee with intertwined hearts and their names, Bonnie and Roy.

3. Parker was an honor student and a poet, and life as one of America’s most wanted didn’t stifle those interests. Shortly before her death, Parker wrote a poem called “The Story of Bonnie and Clyde,” which was published in several newspapers and immortalized their tale.

4. Parker and Barrow remained close to their families, even on the run. In fact, it was their predictable pattern of stopping to visit family that aided the team of Texas Rangers and deputies who ambushed and killed them.

5. The pair attained such notoriety that hordes of people flocked to the scene of their death and later to the coroner’s to retrieve “souvenirs.” Some attempted to cut off Barrow’s ear or finger; others took snippets of Parker’s blood-soaked dress or shattered window glass. One man offered Barrow’s father over $30,000 for Barrow’s body—the equivalent of over $600,000 today.

Page 1 of 1
Permissions in this forum:
You cannot reply to topics in this forum
Who is online?
In total there are 74 users online :: 0 Registered, 0 Hidden and 74 Guests :: 4 Bots