Russia can dodge any proposed US sanctions by switching to other currencies and creating its own payment system, Putin’s economic advisor Sergei Glazyev said Tuesday. A senior Kremlin official has denounced Glazyev’s remark on US-Russia economic ties, calling them "a personal opinion" inconsistent with the Kremlin stance.

This comes amid US threats to pile sanctions on Russia over its stand on the Ukrainian coup. US Senate is currently debating possible measures against Moscow.

Senator Christ Murphy, the chairman of the Senate's Europe subcommittee, said lawmakers were considering such options as imposing sanctions on Russia's banks and freezing assets of Russian public institutions and private investors.

Sergei Glazyev told reporters today Russia would have to switch to other currencies to curb its dependence on the United States.

"We have wonderful economic and trade relations with our Southern and Eastern partners," he emphasized. "We will find a way not just to eliminate our dependence on the US but also profit from these sanctions."

Sanctions imposed by the US against the Russian government institutions will force Russia to recognize the impossibility of loans repayment to the US banks, Presidential Aide Sergei Glazyev said.

"If sanctions are applied against state structures, we will be forced to recognize the impossibility of repayment of the loans that the US banks gave to the Russian structures. Indeed, sanctions are a double-edged weapon, and if the US chooses to freeze our assets, then our equities and liabilities in dollars will also be frozen. This means that our banks and businesses will not return the loans to American partners," he said.

Russia will only engage in a dialog with the ruling Ukrainian regime if it "returns to legitimacy," Putin’s senior advisor Sergei Glazyev has said.
"This regime is illegal, it is profoundly Russophobic. Some people in the Ukrainian government, who have seized power by force, are on terrorist lists. They are criminals," Glazyev underscored.

"I cannot imagine us having any serious dialog with criminals, apart from talks that would bring them back into the legal framework, restore the rule of law and make Yatsenyuk, Klitschko, Tyagnibok and European ministers deliver on their promises [made in connection with the Feb. 21 agreements]," he said.

The Kremlin has expressed its surprise over remarks of President Putin’s economic security advisor Sergei Glazyev who claimed today Russia could easily dodge US sanctions. Russian media have learnt this from a senior official in the Putin administration.

Mr. Glazyev said earlier today that Russia would be forced to switch to other currencies and set up its own payment system if US Senate were to sanction it over Ukraine.

The advisor claimed that Moscow would recommend everyone to get rid of their US Treasury bonds if the United States froze the assets of Russian public institutions and private investors. He added that Russia would also have to default on its loans to American banks.

"Mr. Glazyev has not been authorized to talk on behalf of the Russian government and especially to voice such unacceptable measures," the source in the Kremlin said. He stressed it was Glazyev's "personal opinion" that had nothing to do with Russia's official stance.
Voice of Russia, RIA

Mar. 17, 2014, 10:21
This morning, the White House announced sanctions against seven individuals with close ties to Vladimir Putin.
So far, it doesn't look like the market cares. At all.
Russia's stock market is up over 3 % 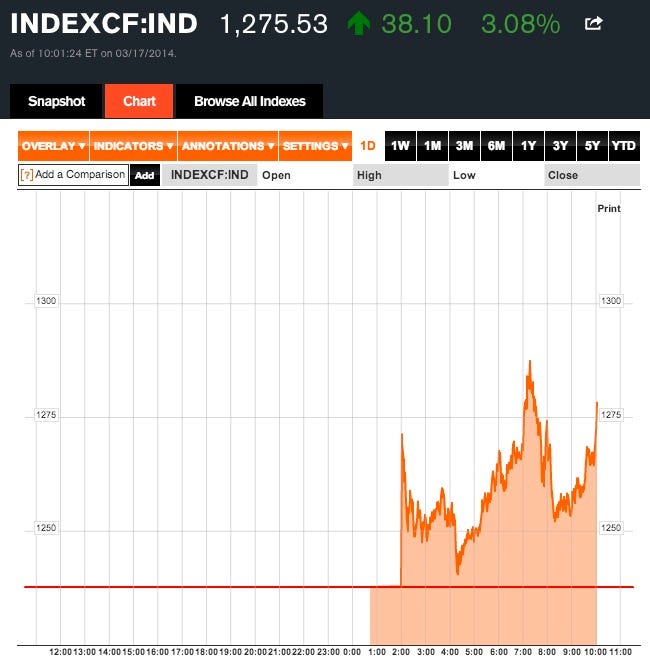 Meanwhile, the dollar is falling against the ruble. 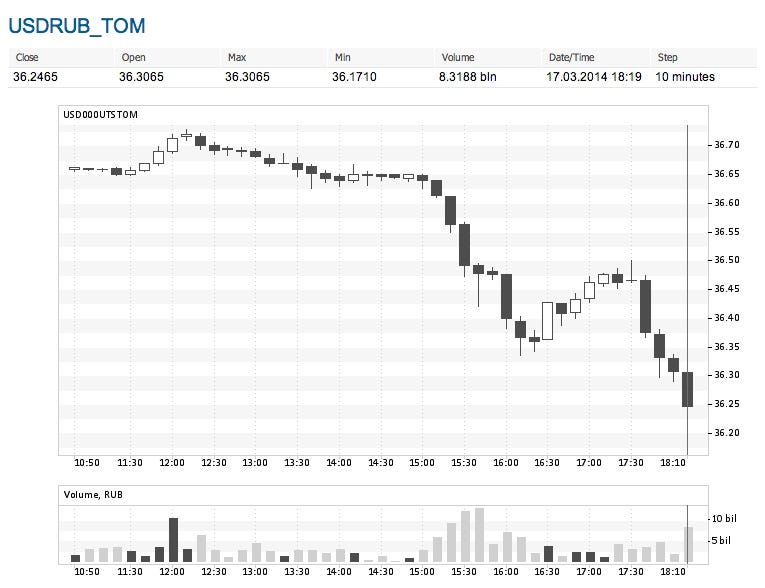 The United States and Europe will have to go to war with Russia to save the US dollar as the reserve currency of the world while the Brics countries look on and wait for the economic spoils especially China. These are interesting times. Russia and China are bent on killing the US dollar. Let's all hope for the best now. We in the west are hoping for the best leadership America has so often displayed. Lets see what happens. And by the way I believe that missing aircraft is in play with all of this. Blessings all.

The Russians can do what they want. Both they and China have dollar envy, but neither one of them has the ability to go toe to toe with the US in an economic war. Both their economies are in the crapper, and even China is finally beginning to admit they are up the creek without a paddle. I expect that the business will be the scapegoats, maybe they'll even use this as an excuse to nationalize/re-nationalize them. As to the Russians, well they have taken corruption to dizzying new heights, but their economy is limping along at best.
*****************
Trust but Verify --- R Reagan