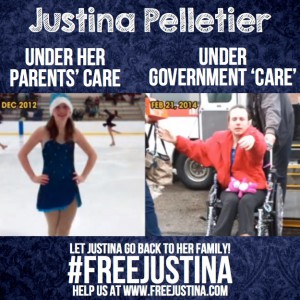 In the 14 months since the State of Massachusetts and Boston Children’s Hospital kidnapped Justina Pelletier “for her own good,” her health has deteriorated to where she is now confined to a wheelchair. Justina has been subjected to psychiatric torture, imprisoned in a psychiatric ward, denied medications prescribed by her longtime physician, force-medicated by strange doctors and prevented from contact with her parents for more than one hour per week. Her parents have been charged with child abuse, gagged by the courts, financially drained and emotionally destroyed.

Isn’t life grand in “free” USA for those who run afoul of the medical-industrial complex?
I first told you about Justina’s plight in November. Then-15-year-old Justina — who suffers from mitochondrial disease — was under the care of a well-regarded physician and genetic specialist at Tufts Medical Center named Mark Korson, M.D. In addition to 27 years’ experience in the practice of medical genetics, clinical genetics, pediatric medical genetics and pediatric medicine, Korson is board certified in clinical biochemical genetics. Those are credentials even the medical mafia usually respects.

Despite dealing with her genetic abnormality, Justina lived a fairly normal life with her parents in West Hartford, Conn. That changed in February 2013 when Justina developed flu-like symptoms and her parents took her to Boston Children’s hospital for treatment.

There, doctors seeing her for the first time determined that she was suffering from a mental disorder, not mitochondrial disease, and her symptoms were psychosomatic. Without consulting her longtime physician, doctors at Boston Childrens created a new treatment plan for her. When her parents, Linda and Lou Pelletier, declined to sign off on it and took steps to remove their daughter from the hospital, hospital officials contacted the Massachusetts Department of Children and Families and accused the Pelletiers of child abuse for subjecting their daughter to invasive medical treatments and denying her mental health therapy.
The State goon squad then grabbed her from her parents, ushered them out the door and began 14 months of torture for Justina and her parents.

Two weeks ago, the Pelletiers received a little relief. A judge ordered Justina transferred to a non-medical living facility. But that facility refused to take her, fearing the media attention her case has received.

Contempt charges against Lou for violating a court gag order by speaking to the media were dropped. The judge also ordered that Korson, Justina’s original doctor, be part of the medical team caring for her.

But the Pelletiers still face child abuse charges. They still can see her only once per week for one hour, the visits are supervised and the facility is a two-hour drive each way from their home. They can’t take photographs of their own daughter.

Just over a year ago, while Justina was under her parents’ and Korson’s care, she was a happy teenager who enjoyed going to school and visiting friends and was performing jumps and spirals at a skating show.

Under the 14-month long “protection” of Massachusetts DCF, Justina’s health has declined; she has been sequestered from her parents and friends, denied an education, tortured and declared a mental patient.

“I feel like a prisoner,” Justina told the Rev. Pat Mahoney, who accompanied the Pelletiers on a recent visit. That’s because she is, and she has been for 14 months.

“This is a victory, but the battle is long from being over,” Lou Pelletier, a financial planner with four daughters told ABC News. “The [Department of Children and Families] is still in charge, Justina is still in a psychiatric residential facility and the child abuse charges have not gone away.”

And it’s the parents who have been charged with child abuse?

Don’t view Justina’s case as an isolated one. In fact, the medical mafia is increasingly kidnapping children from their parents in disputes over medical care. Expect it to increase exponentially under Obamacare. When the state ultimately controls the diagnosis and treatment of disorders, medical tyranny will increase and submission to the prescribed protocols will be mandatory under threat of imprisonment — or worse.

Remember; there is little more devastating and more dangerous than a government program designed “for your own good.”

Re: It’s 14 Months Of Torture For Justina Pelletier

I have been following this story. It is incredible how so messed up the system is. And it will get worse I'm afraid.

They are also strong arming parents that opt out of mandatory vaccinations. There are many opt-out forms one can use to tip the scales and prevent their children undue horror from the vaccines.

Get smart people! Eugenics is not some whacky theory that is floating around. It is coming to a doctors office near you!

Re: It’s 14 Months Of Torture For Justina Pelletier

Page 1 of 1
Permissions in this forum:
You can reply to topics in this forum
Who is online?
In total there are 71 users online :: 1 Registered, 0 Hidden and 70 Guests :: 2 Bots