By Amanda Frolich via The Activist, 19 December 2013

The secret is out – bees have been disappearing for almost a decade now, and scientists are scrambling to understand why. Some sources relay that the colonies all across the world are vanishing due to pesticides, electromagnetic frequencies, mites, and even GMO crops, but what researches have recently found to be the cause of the bee catastrophe will shock you. 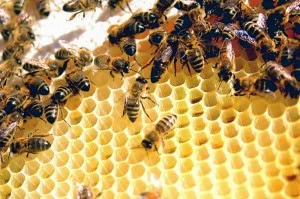 Image Credit: Flickr / Todd Huffman
According to a recent report in Quartz, a first-of-its-kind study determined that large numbers of bees are dying due to cross-contamination of pollen and various pesticides.

“Scientists had struggled to find the trigger for so-called Colony Collapse Disorder (CCD) that has wiped out an estimated 10 million beehives, worth $2 billion, over the past six years. […] Scientists at the University of Maryland and the US Department of Agriculture have identified a witch’s brew of pesticides and fungicides contaminating pollen that bees collect to feed their hives. The findings break new ground on why large numbers of bees are dying though they do not identify the specific cause of CCD, where an entire beehive dies at once.”

Researchers behind the study, which was published in PLOS ONE, collected pollen from hives on the east coast – including cranberry and watermelon crops – and fed it to healthy bees. The tested bees experienced a serious decline in their ability to resist a parasite that causes Colony Collapse Disorder

It was found that the pollen the bees were fed had an average of nine different pesticides and fungicides, and one sample contained a deadly concoction of over 21 different chemicals. Furthermore, the researchers found that bees that ate pollen with fungicides were three times as likely to be infected with the parasite .

What does this study conclude? That fungicides play a larger role in Colony Collapse Disorder than previously hypothesized. While neonicotinoids have been linked with mass bee deaths, it seems most fungicides are widely believed to be harmless to bees. The study shows that it is more than just pesticides, but a combination of toxic chemicals, which is harming the bee colonies.

Unfortunately, there’s more to the scenario. It’s not just the types of chemicals that need regulation, but spraying practices, as well. The samples tested on the bees were not foraged from crops, but from weeds and wildflowers, which means the integral insect is more widely exposed to pesticides than thought.

The authors summarized in their study, “More attention must be paid to how honey bees are exposed to pesticides outside of the field in which they are placed. We detected 35 different pesticides in the sampled pollen, and found high fungicide loads. The insecticides esfenvalerate and phosmet were at a concentration higher than their median lethal dose in at least one pollen sample. While fungicides are typically seen as fairly safe for honey bees, we found an increased probability of Nosema infection in bees that consumed pollen with a higher fungicide load. Our results highlight a need for research on sub-lethal effects of fungicides and other chemicals that bees placed in an agricultural setting are exposed to.”

While the situation might seem simple – chemicals sprayed on crops are killing bees – the details of the issue continue to become more complex. Concerns include: what can be sprayed, where, how, and when to minimize the negative effects on bees and other pollinators while still assisting in crop production.

To create balance between mankind and the ecosystem, changes need to be implemented, but at a rate which will not disastrously affect the economic status. For this reason, becoming a sustainable world is a challenging task.

Presently, scientists are still working to discover to what degree bees are affected and by what. The time line before new systems are regulated and implemented means the public must step up to protect the valuable workers which are essential for sustaining life on Earth.

Choosing organic foods, environmentally responsible products, and helping to create awareness regarding the current issue may do wonders to radically shift the bee decline affecting everyone
*****************
Tweet

Re: This new finding explains why Bees are disappearing

‘Colony Collapse Disorder’ (CCD has been an issue for a half dozen years, perhaps longer.  Europe banned the use of certain chemicals several years ago as a result of scientific findings linking them to the bees deaths.  The EPA has been slow to respond the last 6-7 years when faced with the scientific findings.  There are several lawsuits in the works right now against not only chemical companies but agaisnt the EPA as well.
*****************
~selah

Re: This new finding explains why Bees are disappearing

Do we need to reduce the amount of chemicals we use? Absolutely. Have we reduced them somewhat? Yes, I believe so. Is the fact that the EU has banned some significant? Not necessarilly. Keep in mind, these are the same people who have effectively banned the use of cinnamon because one component in this natural substance that has been in use since at least 2000BC MIGHT be toxic.

This is not to minimize the issue, it is significant, and does need to be addressed. There is more than one side to everything. We need to address the issue of CCD, but we also have to address the needs of the people who need the food. There is already too much starvation, we we need to address that as well. I am all for taking care of the earth, but we also need to take care of the people as well. That is one reason I am opposed to ethanol in fuel. We are taking food of the table of the poor so rich liberals can feel good. There is no reduction of fossil fuel consumption when you calculate the whole life cycle, just a reallocation.
*****************
Trust but Verify --- R Reagan