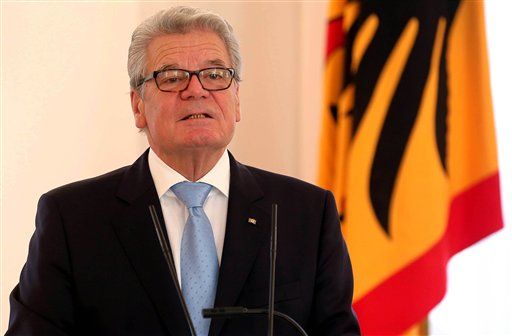 (Newser) – German President Joachim Gauck has become the highest-profile political figure to say "nyet" to next year's Winter Olympics in Sochi, Russia. The former pastor, whose position is largely ceremonial, says he plans to stay away because of the Putin regime's human rights abuses and harassment of the political opposition, reports CNN. The Russian government has been informed of Gauck's boycott but no comment has been forthcoming.


Russian right violations—including a harsh anti-gay law that the country's sports minister says will apply to athletes—has led to calls from activists for the Games to be boycotted or moved. "An absolute ban on the Russian Winter Olympics of 2014 on Sochi is simply essential," British actor Stephen Fry wrote in a letter to the International Olympic Committee. "Stage them elsewhere in Utah, Lillehammer, anywhere you like. At all costs Putin cannot be seen to have the approval of the civilized world."

I think all nations should boycott Russia. They are ridiculous with all their anti propaganda crap in this day and age. Peace and Love should be what matters in this world for everyone.
*****************
Pama's Friendly Tips
http://pamastalkshow.com

Page 1 of 1
Permissions in this forum:
You can reply to topics in this forum
Who is online?
In total there are 59 users online :: 0 Registered, 0 Hidden and 59 Guests :: 2 Bots