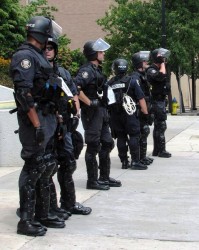 In the United States today, our public schools are not very good at educating our students, but they sure are great training grounds for learning how to live in a Big Brother police state control grid. Sadly, life in many U.S. public schools is now essentially equivalent to life in U.S. prisons. Most parents don’t realize this, but our students have very few rights when they are in school. Our public school students are being watched, tracked, recorded, searched and controlled like never before. Back when I was in high school, it was unheard of for a police officer to come to school, but today our public school students are being handcuffed and arrested in staggering numbers. When I was young we would joke that going to school was like going to prison, but today that is actually true.

but today that is actually true.
The following are 18 signs that life in our public schools is now very similar to life in our prisons….


#1 Virginia Attorney General Ken Cuccinelli has announced that school officials can search the cell phones and laptops of public school students if there are “reasonable grounds for suspecting that the search will turn up evidence that the student has violated or is violating either the law or the rules of the school.”

#2 It came out in court that one school district in Pennsylvania secretly recorded more than 66,000 images of students using webcams that were embedded in school-issued laptops that the students were using at home.

#3 If you can believe it, a “certified TSA official” was recently brought in to oversee student searches at the Santa Fe High School prom.

#4 A few years ago a class of 3rd grade students at one Kentucky elementary school were searched by a group of teachers after 5 dollars went missing. During the search the students were actually required to remove their shoes and their socks.

#6 The U.S. Department of Agriculture is spending huge amounts of money to install surveillance cameras in the cafeterias of public schools so that government control freaks can closely monitor what our children are eating.

#7 A teenager in suburban Dallas was recently forced to take on a part-time job after being ticketed for using bad language in one high school classroom. The original ticket was for $340, but additional fees have raised the total bill to $637.

#9 A few months ago, a 17 year-old honor student in North Carolina named Ashley Smithwick accidentally took her father’s lunch with her to school. It contained a small paring knife which he would use to slice up apples. So what happened to this standout student when the school discovered this? The school suspended her for the rest of the year and the police charged her with a misdemeanor.

#10 A little over a year ago, a 6 year old girl in Florida was handcuffed and sent to a mental facility after throwing temper tantrums at her elementary school.

#11 In early 2010, a 12 year old girl in New York was arrested by police and marched out of her school in handcuffs just because she doodled on her desk. “I love my friends Abby and Faith” was what she reportedly wrote on her desk.

#12 There are actually some public schools in the United States that are so paranoid that they have actually installed cameras in student bathrooms.

#13 Down in Florida, students have actually been arrested by police for bringing a plastic butter knife to school, for throwing an eraser, and for drawing a picture of a gun.

#14 The Florida State Department of Juvenile Justice has announced that it will begin using analysis software to predict crime by young delinquents and will place “potential offenders” in specific prevention and education programs.

#15 A group of high school students made national headlines a while back when they revealed that they were ordered by a security guard to stop singing the national anthem during a visit to the Lincoln Memorial.

#16 In some U.S. schools, armed cops accompanied by police dogs actually conduct surprise raids with their guns drawn. In this video, you can actually see police officers aiming their guns at school children as the students are lined up facing the wall.

#17 Back in 2009, one 8 year old boy in Massachusetts was sent home from school and was forced to undergo a psychological evaluation because he drew a picture of Jesus on the cross.

#18 This year, 13 parents in Duncan, South Carolina were actually ticketed for cheering during a high school graduation.
For many more signs that life in U.S. public schools is now essentially equivalent to life in U.S. prisons check out the short video posted below….

Similar topics
» 20 Signs You're Succeeding In Life
» Iraq has passed important milestones to enhance the role of women and empower them to participate in public life
» Shocking footage aired of massacre in Maliki’s prisons
» Mnt Goat: "there is no new signs or evidence whatsoever that they are going to RV any time prior to the beginning of 2022" (There Are No Signs That They Are Going To "RV" Either! LOL) 10/20/21
»  Galactic Heart: 20 Signs of Quantum Upgrades (20 signs You Need Professional Mental Help) 6/9/17

Page 1 of 1
Permissions in this forum:
You can reply to topics in this forum
Who is online?
In total there are 51 users online :: 2 Registered, 0 Hidden and 49 Guests :: 3 Bots