Ever have one of those weekends were Monday looks like a day of rest? Well, this was one of them. Saturday morning my wife and I got up early to go to a library books sale in a neighboring town. If you are a bibliophile like we are, you'll understand how irresistible they can be ... Well as we were happily browsing the books, I heard a plane, it sounded unusual as it seemed unusually low and the engine seemed to be cutting in and out ... well sure enough as I looked I saw the plane just above tree top level flying toward a large hill ... it disappeared behind the trees and BANG! I took off on a run, down the road and up the hill .. well as close to a run as this more than middle aged body could muster up that steep hill. On arrival, the pilot and passenger seemed were out of the plane and stacking their gear about 20 feet from it. We talked to them and made sure they were OK, by then the fire department was on scene so we walked back down with some of their gear. 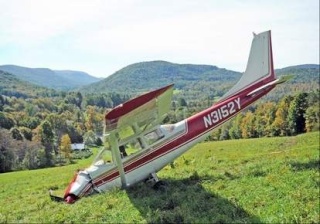 Well an hour later we were off to the farm stands ... $40.00 later and a lot of fresh fruit and vegetables later, it was time to pick up a few things at the grocery store. Kiss another $50.00 goodby (remember I said a FEW things). Home for a quick lunch ... wait, we just got a line on an island for the kitchen ... man we need that work space. Yea, that'll work, but I'll have to take it apart to get it home and into the house ... OK, that's done, oops ... time to leave to concert set up and sound check. Well we got that all done, warmed up, at dinner with the other performers, time to get costumed up and warm up again. Three costume changes later, the concert is over. It's 9:15PM where did the time go? Break down and load out time ... OK, now it's 10:15 time to go hang out with some of the guys and relax. A couple of seltzer waters and a bunch of singing later, (Yea, after a day of singing, Barbershoppers relax by singing some more),

It's now midnight, time to head home and to bed ... oh, man my body aches, I am definitely feeling the morning.

8AM, shoot my and put me out of my misery, OK I'm up and dressed off to church. Church was short (Thank You LORD!) so it's home to assemble the island, clean it thoroughly, and begin prepping some stew for tonight ... I will say it's nice having a good amount of work room. Stew is on and cooking, and finally I can get on line for the first time in a couple of days ... now if I can just stay awake long enough to eat and go to bed ... YAHOO!

Sounds like Kevin had a Busy weekend like mine, but it was a good one!!!  Now we are Back to another Week!!! What will we have in store this week???? Hope some of these predictions are correct!!!!

Similar topics
» MarkZ says -- A lot of Intel Providers have been asked to stand down and keep quiet this weekend
» MarkZ Video - Paymaster left Reno- Quiet Weekend
» Bruce says -- I have been told this weekend – Friday – Saturday – Sunday – is going to be an AMAZING Revelatory weekend
» RayRen98 Weekend Update: "accounts are anticipated being funded at any moment this weekend" 9/6/20
» Guru RVAlready: "there won’t be a CBI rate move until after the 3 day weekend" (Iraq Doesn't Have That "3 Day Weekend" ! LOL) 10/9/21