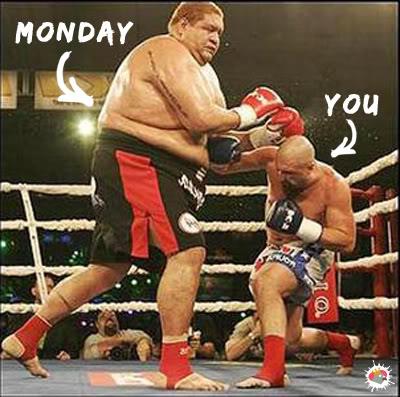 The only way to survive this onslaught by Monday seems to be a quick sucker punch below the belt. Sorry, but I see no other solution.

Yep....I got sucker punched again. My car broke down and had to get towed again last night. Then when I parked my borrowed car about 9:30 pm I heard big booms...4 of them. Turns out it was 3 transformers blowing and one fireworks, but I ran for my life. Then at 2 a.m. my big art fell off the wall and broke the glass and splintered a piece of the wooden frame. It was like raining heck fire around here. I survived the day though and it only cost me $35 to fix a blown hose under the hood. My mechanic did not charge me for the tow or the labor. Thank God, I think that is the end of bad news for a good long while.

I just found out about Okie's son. Nothing is as bad as that. I sincerely pray for all of us at this difficult time on earth. 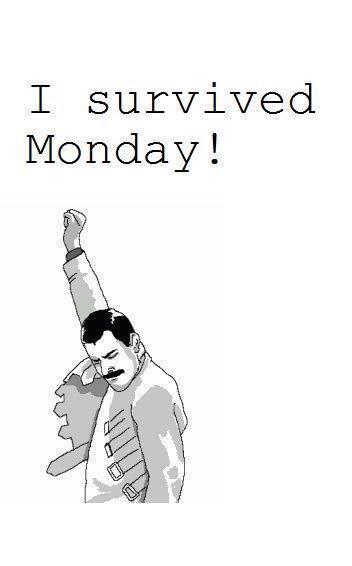 aim88- Wow! You took "it's a Monday" to a whole new level. Glad you survived and all the "bad stuff" is out of the way. 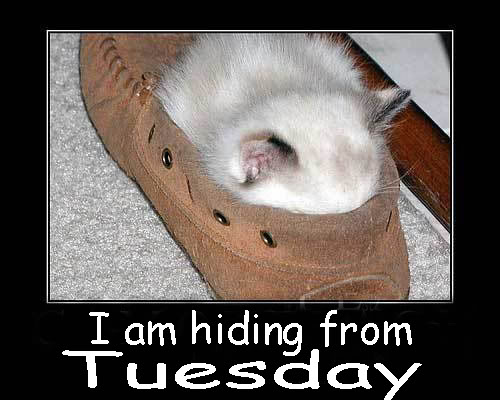 Not me, Kevin, I'm going boldly out with, not one, but two clients in the same day. I'm going to show Tuesday, who's boss!

@ssmith wrote:aim88- Wow! You took "it's a Monday" to a whole new level. Glad you survived and all the "bad stuff" is out of the way.

And yes, condolences to Okie and his family on the loss of his son. I can only imagine how difficult it must be to lose a child.

Thank you, ssmith! What are a few kinks? We are still alive and in the game. My deep condolences goe to Okie and family, as well. I pray they are showered with blessings today and all the days to come to help them overcome this tragedy.

Actually, I have a snow day today

You could always 'Brush' up on your driving skills- Throw your car into an 'uncontrollable' skid at 75 miles per hour, and see if you can hang on to it and steer yourself out of it-Just do it on a road without any trees ,homes, or telegraph poles- Let me know how you make out- Shouldn't take you any longer than 45 minutes to an hour-Take shovel and a fifth of 'liquid courage' with you, I think you'll be alright-And, don't forget a bag or two of fine 'sand'-

Turn wheels in direction of the skid,don't nail the binders {brakes}, and upon slowly letting off the loud pedal {gas }, slowly steer, regain control, and then pull over to the right side of the road, IF that's where you end up, and hope you don't need a change of pants or underwear-Look in the rearview mirror, and verify that nobody is lying in the road behind you naked and skun up,looking like they are going to a BBQ, flipping you off in 57 different languages, and if not, you did alright- And if all four wheels are going sideways, you already frigged up- Is the car still driveable, or do you need a flatbed towtruck?

"telegraph poles"----Are we talking this century?

Yep! Up in Maine, in Aroostook County, they STILL have telegraph poles{telephone line poles}on one side of the road, and power line poles on the other side of the road- It gives a reference point to plow truck drivers in the wintertime so they can tell just where they are on the road- They start plowing the roads in the middle,and then work to plow the outsides of the center of the road, and then with a wing man on the passenger's side of the plowtruck, he guides the driver so he doesn't go off the road when he is plowing- They 'tier' the snow up there, and when it snows heavily, they wing it back, and then use a 'tier' plow to push it back, so the snow banks look like big stairs on both sides of the road, to make more room for more snow-The snow is very high, and on the telegraph pole side, you can walk on the banks, and run your hands along the phone cables-They used to do the same thing on the railroad tracks, but those tracks are no longer used-

Well with a newer car you might not want to correct that way, still steer into the skid, but if you ease up on the gas in front wheel drive you can worsen the skid ... conversely goosing it a little might help you pull out. Of course with anti-lock brakes, just nail the suckers and forget about the gas... and then there is mud season ... some roads you just don't stop no matter what ... keep that go fast mashed ...
*****************
Trust but Verify --- R Reagan

Yep, just turn into the skid and PRAY!!! Of course one could always do what we did on the dirt tracks - 4 wheel drift and "gun" out of the corners. Makes life a whale of a lot more interesting. But then, working at Prudhoe Bay and building ice roads, I have a different experience with icy road conditions than most. The worst is when you have water on ice -- then there is NO control PERIOD. One just hangs on and really PRAYS.

Of course driving on the Arctic Ocean is another thing all together - one has to watch out for the wave one makes by driving on the ice - the wave of water created UNDER the ice may travel along and then hit a fault in the ice and cause a HOLE to develop that one drives into - not a recoverable situation either. It works that way on rivers and lakes also.

Sorry to hear of Okie's loss, condolences to he and his family. One is not supposed to out live one's children. But it happens occasionally.

» New Guru Wolverine: "By mon. the dinar was officially listed on world markets" (And Still No Screenshots! LOL) 11/30/21

» Guru Pimpy: "When the revaluation or the reinstatement happens it'll be announced" (Oh My! More CYA Because Pimpy Has No Clue! LOL) 11/30/212

» New Guru Brent Johnson: "However, while the dinar is tradable internationally- the banks screens do not yet have the rate" (If They Don't Know The Rate, How Have They Been Trading? What An IDIOT! LOL) 11/30/21

» Judy: "The GCR actually began in earnest last Sunday 21 Nov. when the Kingpin of the GCR – the Iraqi Dinar – went international" (When Is The Next Date Of It Happening Judy Is Going To Push Out To Her Followers? LOL) 11/30/21

» Al-Araji from Al-Basha Mosque in Mosul: Mosul is still destroyed

» Iraq to cooperate with Turkey, to combat terror financing