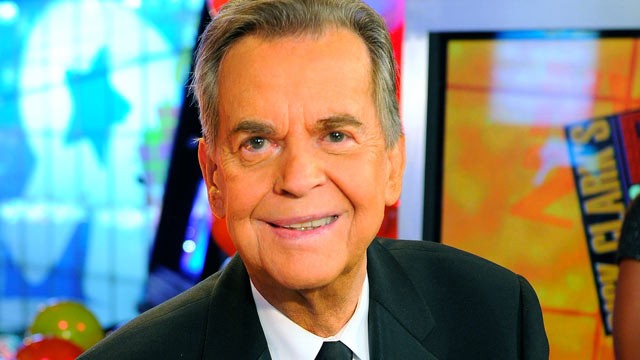 
Dick Clark, the music industry maverick, longtime TV host and powerhouse
producer who changed the way we listened to pop music with "American
Bandstand," and whose trademark "Rockin' Eve" became a fixture of New
Year's celebrations, died today at the age of 82.

Born in Mount Vernon, N.Y., on Nov. 30, 1929, Richard Wagstaff Clark
began his lifelong career in show business began before he was even out
of high school. He started working in the mailroom of WRUN, a radio
station in upstate New York run by his father and uncle. It wasn't long
before the teenager was on the air, filling in for the weatherman and
the announcer.

Clark pursued his passion at Syracuse University, working as a disc
jockey at the student-run radio station while studying for his degree in
business. After graduating in 1951, Clark went back to his family's
radio station, but within a year, a bigger city and bigger shows were
calling.

Clark landed a gig as a DJ at WFIL in Philadelphia in 1952, spinning
records for a show he called "Dick Clark's Caravan of Music." There he
broke into the big time, hosting Bandstand, an afternoon dance show for
teenagers.

From the Beatles to the Boss: 50 Years of 'Bandstand' Memorabilia Watch Video

Ringing in the New Year in Style Watch Video

Within five years, the whole country was watching. ABC took the show national, and "American Bandstand" was born.

"American Bandstand's" formula was simple. Clean-cut boys and girls
danced to the hottest hits and the newest singles. In between, Clark
chatted with the teens, who helped "rate-a-record," turning songs into
sensations. Everyone showed up on "American Bandstand," from Elvis
Presley to Jerry Lee Lewis, Chuck Berry to Chubby Checker.

"Dick Clark's New Year's Rockin' Eve" on ABC became a Dec. 31 tradition,
with Clark hosting the festivities for more than three decades,
introducing the entertainment acts and, of course, counting down to
midnight as the ball dropped in New York's Times Square.

But the traditional celebration saw a temporary stop in 2004, when Clark
suffered a stroke that left him partially paralyzed and struggling to
speak. Regis Philbin stepped in. But by the next New Year's Eve, Dick
Clark was back, his speech still impaired. In halting words, he told
the audience, "I had to teach myself how to walk and talk again. It's
been a long, hard fight. My speech is not perfect but I'm getting
there."

But that didn't stop him: he returned each year, and recently he was joined by Ryan Seacrest.


The Museum of Broadcast Communications has done the math, and figures
that Dick Clark Productions has turned out more than 7,500 hours of
television programming, including more than 30 series and 250 specials,
as well as more than 20 movies for theatre and TV.

All this earned Clark a long list of awards and accolades: Emmys,
Grammys, induction in the Rock 'n' Roll Hall of Fame, a star on the
Hollywood Walk of Fame. It also made him one of the richest men in
Hollywood; he also had stakes in a wide range of businesses, including
restaurants, theatres and real estate.

From the Beatles to the Boss: 50 Years of 'Bandstand' Memorabilia Watch Video

Ringing in the New Year in Style Watch Video

In March of (2012/this year), he put one of his homes on the market,
asking $3.5 million for a one-of-a-kind house on 22 acres in Malibu,
modeled after Fred and Wilma's house on "The Flintstones."

Clark, whose eternally youthful look earned him the nickname "America's
Oldest Teenager", is survived by his three children and his third wife,
Keri Wigton, married to him since 1977. He credited his appearance to
good genes, once saying "if you want to stay young looking, pick your
parents very carefully."

Now, America's Oldest Teenager is gone, leaving his indelible mark on
generations of fans, and helping change rock 'n' roll and TV forever.
His signature sign-off was always "For now, Dick Clark … so long," said
with a salute. Today, generations of Americans are saluting back.

I just heard! How sad!

Levon Helm is barely hanging on as is B.Gibb.

They seem to go in threes.

Many Saturdays as a child my sister and I would dance to American Bandstand.

A great icon who seemed to never age, a fond farewell from an adoring public. He lived a long life, made a great impact, and brought music and dancing to many people. <3

Similar topics
» The Legend Of St Valentine...
» Is the American Dream becoming a urban legend?
»  "Tribute to a Legend" - SPEAK Update - Tank - 7/24/18
»  "OkieOilMan: The Man, The Myth, The Legend" - Dr. Dinar Update 12/6/19
» Obeidi: Legend Brigadier Anmar and his brothers for organizing demonstrations in favor of it and pay amounts Malle hired some of the post