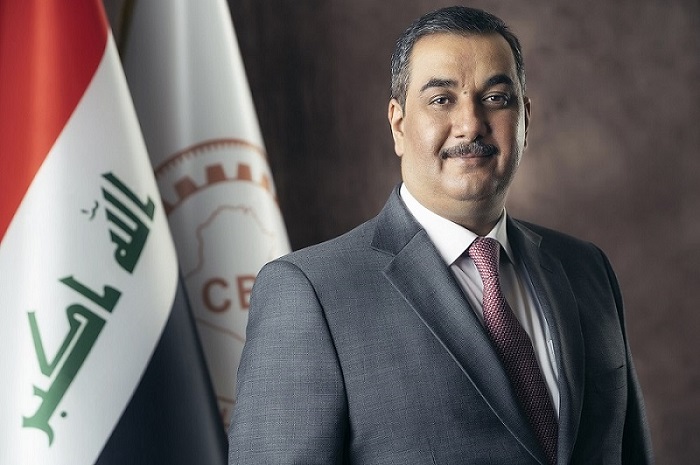 Today, Wednesday, the Governor of the Central Bank of Iraq, Mustafa Ghaleb Mikhaif, outlined his main priorities and main tasks adopted by the bank, while separating a group of files, including international cooperation with major banks, the work of the Deposit Insurance Company, the performance of the banking sector, and the development of the payments system .

Makheef said, during an interview with an economic magazine affiliated with the Central Bank, that “everyone knows that the Iraqi economy has been accompanied during the last period by many shocks, such as the drop in oil prices and the war on ISIS terrorist, as well as the state of political instability, so the Central Bank of Iraq contributed to maintaining stability.” The value of the Iraqi dinar significantly bears the costs of imbalance in the cash flow of the general budget .”

He added: "In addition, we have set our sights on moving from the process of unilateral targeting (maintaining an acceptable level of inflation) to the case of bilateral targeting represented in maintaining monetary stability and promoting growth, and for this we seek to work on activating indirect monetary policy tools, as well as On the adoption of a policy of quantitative easing through the initiatives of the Central Bank, which amounted to about 18 trillion dinars, which represents a case of planned financial guidance in harmony with market economies in creating a partnership between the banking sector (conventional and Islamic) and the real sector (public and private), as strategic projects will be presented Financing it through the banking system and under the supervision of the Central Bank .

He continued his speech by saying, "One of the most important priorities of this bank, in addition to its main tasks, is to adopt the following : -

He continued: "As is the case in all countries of the world, the banking system faced financial and health crises, which in turn led to a stagnation in economic activity at a lower level than expected, but it is acceptable in light of the multiple challenges experienced by the banking sector ."

And he indicated, "The measures of the Central Bank contributed to prompting some banks to take courageous steps to strengthen the confidence of depositors and society in them, while the activities of other banks were negatively affected by these circumstances, as we expect that our urgent reform efforts will bear fruit soon, and it is useful to say, that the Central Bank's initiative to support Bank liquidity and the provision of funds to those in need of citizens and companies has enhanced the performance of the banking sector and made it more involved in moving the economic wheel .”

He continued: "Through the foregoing, the Financial Action Task Force (FATF) removed Iraq from the monitoring and follow-up list for the modernization phase every two years, and we are now in the process of removing Iraq from the high-risk countries according to the classification of the European Union ."

And he added: “In addition, the Bank has started implementing Financial Reporting Standard No. 9 since 2017, and it has imposed on banks to apply international standards since 2019, including Standard No. 9, and with regard to financial inclusion, we have taken important steps in achieving this goal by forming a committee To prepare the national strategy for financial inclusion in cooperation with relevant international and local institutions .

He explained, "The compliance and anti-money laundering officials are appointed under conditions determined by the Central Bank of Iraq related to banking experience and certificates, and they are not dismissed except after obtaining the approval of this bank, and their departments are independent and linked to the bank's board of directors directly in accordance with the governance guide issued by this bank ."

He continued: "This bank has entered into a number of agreements with major commercial banks to open new horizons for international banking cooperation, to maintain existing relations and open new channels of communication with international commercial banks with high credit ratings characterized by low risks and the ability to achieve the objectives of the Central Bank of Iraq from By contributing to managing foreign reserves investments and facilitating external transfers and oil credits, as well as developing the capabilities of the cadres of this bank .”

On the other hand, work is currently underway with a number of sober international banks to create the necessary ground for banking cooperation with Iraqi banks that have outstanding performance and have a credit rating from accredited rating agencies. Opening accounts for Iraqi banks and opening new horizons for international cooperation .

Regarding the Deposit Insurance Company, he said: “The board of directors of this bank issued a decision to grant the Iraqi Deposit Insurance Company the final license with a capital of 100 billion dinars to practice working with deposit insurance, taking into account the Law of the Central Bank of Iraq No. 56 of 2004 and the Banking Law No. 94 of 2004 and the amended Companies Law No. 21 of 1997 and Deposit Insurance Law No. 3 of 2016 provided that it is subject to the control and supervision of this bank. The members of the company’s board of directors were selected and the authorized manager was appointed, and the company’s website was also chosen to complete the procedures and start doing its business .

And the governor continued: “Here, it must be noted that the company is still in the first stage in terms of implementing its objectives and it needs media support, especially at this stage in order to communicate its objectives and the purpose of its establishment to the public, in order to enhance the citizen’s confidence in the banking sector, and all of this needs more Combined time and effort .

On the other hand, the governor said, "Within the framework of the Central Bank of Iraq's efforts to develop its infrastructure, a future vision is being developed for the development of the payments system by operating systems compatible with international best practices with the aim of enhancing financial inclusion and electronic automation through several procedures we are working on as projects for the Payments Department in The Central Bank of Iraq, namely :

B - A project to automate the work of ministries and government institutions .

C - The project of establishing a Fast Payment system.

D - The project of digitizing e-learning in Iraq .

E - Implementation of the electronic know your customer (K-KYC) project, which provides a unified database to facilitate the process of identifying the customer .

g- Developing the Real-Time Gross Settlement System (RTGS) to work in line with a unified database to facilitate the process of identifying the customer .

H - The participation of the Iraqi banking system in the regional clearing system and the inter-Arab payments clearing and settlement system .

I - Preparing the national strategy for financial inclusion and delivering electronic payment services to all segments of society .

J - Contracting with consulting companies to draw up a payment strategy and develop the structure of payment systems .

k- Contracting with external audit companies to audit the work of electronic payment service providers in terms of financial and technical terms and their compliance with international standards and the instructions of this bank .

Similar topics
» The Economic Parliamentary Committee attributed the continuous decline in the value of the Iraqi dinar in exchange of USD price to "the unsuccessful policy adopted by the Central Bank of Iraq."
»  The central bank adopted an open door policy to communicate with banks and money transfer
» The financial committee reveals the mechanism for paying Iraqi debts .. and the central bank reveals its monetary policy to control the exchange rate
» Iraq: ziggurat and the bridge of the most prominent imams signs adopted by the central bank to issue the new currency
» The Central Bank of Iraq and the objectives of monetary policy