Experts: Turkey is preparing to cut 56 percent of the Tigris supply by building the Jazra Dam

Experts: Turkey is preparing to cut 56 percent of the Tigris supply by building the Jazra Dam 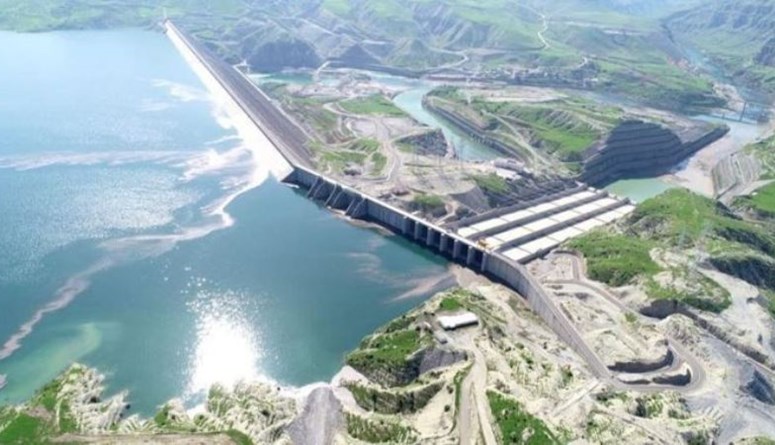 Turkey intends to cut off 56 percent of the Tigris River supply, by insisting on the construction of the Al-Jazira Dam near the Iraqi border, to use the water for irrigation purposes, at a time when experts are talking about a stifling crisis that the country will experience because of this measure, calling for action at the highest levels and assigning the negotiations file to the Prime Minister, They revealed that the water storage has decreased to less than 17 billion cubic meters .

Water expert, Adel Al-Mukhtar, said that "there is a defect in the work of the Ministry of Water Resources, especially at the level of dams ."

Al-Mukhtar continued, "The problem is related to water management and waste," noting that "the Ministry of Agriculture spends 85% of water releases, and this means 48 billion cubic meters annually ."

He pointed out that "the water storage, according to what was stated by the former Minister of Water Resources, Hassan Al-Janabi, has reached less than 17 billion cubic meters ."

Al-Mukhtar explained, "The crisis is exacerbated by the continued use of old methods of irrigation in the face of large areas of cultivation, and this is facing weak production ."

And he indicated, "The Iranian and Turkish sides claim that they do not have enough water to release it to Iraq, which is inaccurate," stressing that "the year 2019 witnessed a flood rainy year that prompted these two countries to open all water outlets and release torrents, and this means that they have full reserves ."

Al-Mukhtar stated, “As a result of these floods, Iraq succeeded in storing 60 billion cubic meters in that year,” noting that “2020 was also a rainy year in the countries of the Tigris and Euphrates basins, and there was no problem .”

He continues, "The problem actually appeared in 2021 and 2022, when statements appeared by neighboring countries supporting their lack of storage, and these statements are evidence against those countries in that they wasted water in less than two years ."

Al-Mukhtar spoke about "Turkey's proximity to the construction of the Al-Jizrah Dam and it will eliminate the Tigris River and prevent water from it," explaining that "Al-Jizrah is an irrigation dam between the Ilisu Dam and the border with Iraq ."

And he added, "The carrot will seize the waters of the Ilisu Dam and divert it to agriculture," stressing that "56 percent of the Tigris River's revenues will be completely finished ."

And Al-Mukhtar said, "Iraq needs international support to put pressure on Iran and Turkey over water, but these two countries did not sign the Helsinki Agreement in 1992 or the 1997 agreement on the use of non-navigable river courses ."

He pointed out, "there is a discrepancy between the work of the ministries of water resources and agriculture, and therefore a higher council must be established to manage water plans," calling for "authorizing the prime minister to hold talks on water affairs with neighboring countries ."

Al-Mukhtar added, "The water file is in the hands of the President of the Republic in both Turkey and Iran, while in Iraq it is under the control of the competent minister ."

He finds, "Giving the file to the Prime Minister will make him travel to both Iran and Turkey and negotiate with them all the pressure cards under his hand, such as the economy or oil ."

Al-Mukhtar went on to say, “Accepting the existence of a third arbitrator is not without the consent of the parties to the conflict, and we do not expect that either Iran or Turkey will accept resorting to arbitration over water, and we have no choice but to initiate a visit at the highest levels that can create pressure and obtain through it.” over our water rights .

For his part, the other expert, Khattab Al-Daman, stated that "Turkey is actually planning to construct the Al-Jazira dam inside its territory near the border with Iraq, and it aims to store water for irrigation purposes, which is more harmful to Iraq than the Ilisu Dam ."

Al-Damen added, "The completion of the new dam will exacerbate Iraq's suffering in terms of water scarcity, insufficient quantities for human uses and irrigation, as well as high salinity rates ."

He stressed, "International law guarantees the rights of countries through which water passes. Both Turkey and Iran are source countries for Iraq, and these two countries must work to preserve our water rights ."

The guarantor went on to say that “the rules of international law included that all countries, whether upstream or downstream, must share in any damages that occur as a result of drought .”

He noted, "Iraq is moving diplomatically to internationalize the water issue," adding that "the Ministry of Water Resources has sent letters of protest to Iran and Turkey, but we have not received answers until now ."

The guarantor considered, "Iraq has great pressure papers that help it obtain its water rights from the Iranian and Turkish sides, foremost of which is the issue of trade and oil ."

He stated, "The means of pressure is to impose customs restrictions or taxes on Turkish and Iranian goods that have a promising market in Iraq, or to transfer imports to other countries ."

The guarantor concluded, “These solutions could be final and decisive, but we do not wish to reach this stage, and what motivates us to think about them is that Iraq is living in a suffocating water crisis and is looking for appropriate solutions to solve it .”

An official statement by the Ministry of Water Resources stated that Minister Mahdi Rashid Al-Hamdani, accompanied by the Special Envoy of the Iraqi Prime Minister for Water Affairs, held a virtual meeting yesterday with the envoy of the Turkish President for Water Affairs Vesel Oglu regarding the status of water imports of the Tigris and Euphrates rivers entering Iraq .

The statement continued, "The meeting witnessed Al-Hamdani's request from the Turkish side to reconsider the water release plan, in a way that secures Iraq's need to overcome the current water scarcity conditions ." According to the term newspaper report.

He pointed out, "The Turkish President's Special Envoy for Water Affairs expressed his readiness to cooperate with Iraq by instructing the Turkish Water and Dams Corporation to increase water releases during the next few days, according to the available reserves ."

The statement went on to “and agree to send an Iraqi technical delegation to view on site the reality of the water storage in the Turkish dams and to discuss the operational plans for those dams according to the available storage to overcome the current water scarcity crisis that Iraq is going through.”

Similar topics
» The Iraqi army is preparing to erect pontoon bridges on the Tigris River
» Iran halted the flow of a tributary of the Tigris in conjunction with Turkey
» Turkey announces the date of suspension of the work of Alesso Dam on the Tigris
» Turkey house sales up 6.5 percent in August, Iraqi and Saudi clients top foreign buyers
» Experts: Changing the exchange rate means re-preparing the budget completely