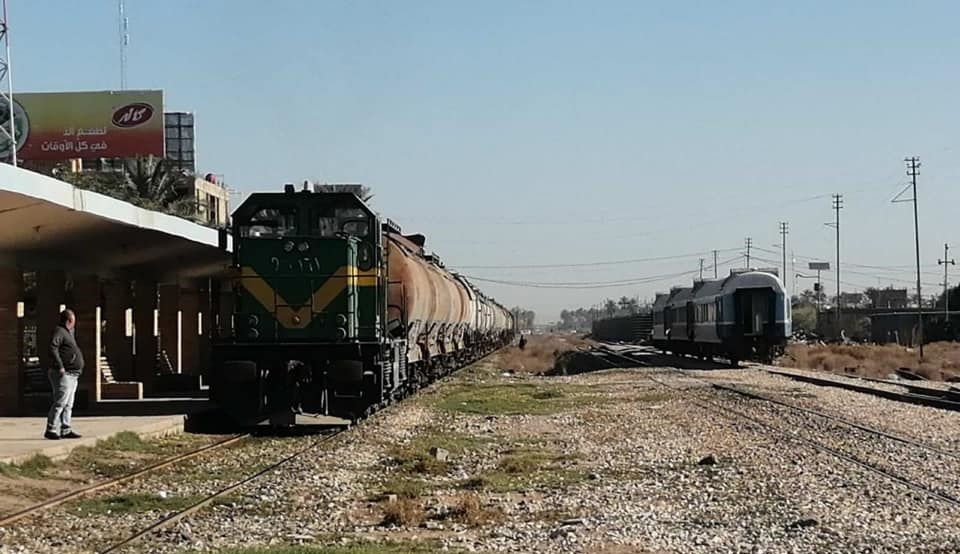 Shafaq News / Iraq hopes to play a pivotal role in the new Silk Road project, given its geographical location between Asia and Europe, which will pave a new path for the country to expand its economic base and achieve economic diversification; Hereby lies the importance of al-Faw Grand Port project and rail linkage.

Chinese Foreign Minister Wang Yi said in 2015 that China's initiative, known as the Belt and Road Strategy, encompasses about 1,000 projects, including connecting Eurasian countries to some 70 countries overlooking the line, primarily middle eastern countries, through which the road passes, with a network of land, rail and, airline routes, as well as pipes and internet networks, creating a nourishing environment for economic development.

As Iraq began to build al-Faw Port, which will be the link between East Asia and Europe, many countries leaned toward establishing a railway link with Iraq, turning Iraq into a cargo corridor. That move is supposed to shorten the period for the transport of goods, which has raised concerns among economists  that it might affect al-Faw Grand Port in the future.

Abdul Rahman al-Mashhadani, a professor of economics at the Iraqi University, said, "The reconnection of railways with neighboring countries has two negative impacts, the first of which is that it will end what have been left of the national industry and agriculture. Moreover, it will undermine the vitality of al-Faw Grand Port project and render it useless."

"The presence of large commercial ports for some countries on the Arabian Gulf, such as Jebal Ali and Bandar, underestimates the importance of al-Faw Port," al-Mashhadani said, adding that the revenues that Iraq will receive from al-Faw Port, if it is completed, are not huge despite the urgent need for it.

There were ambitions of neighboring countries (Kuwait, Iran, and Saudi Arabia), to connect the railways with Iraq. However, some of these ambitions collide with Iraqi concerns, particularly Kuwait’s, especially with establishing the Kuwaiti Mubarak Port that could be an alternative to the Iraqi al-Faw Port.

Furthermore, Iranian ambitions raised the concerns of some specialists, after the recent emergence of serious intentions from the Iranian government to start connecting railways with Syria through Iraqi territory, in what the Iranian Ministry of Transport called the " Connecting transit".

In this regard, former transport minister, Amer Abdul Jabbar, stated, "The rail link between Iraq and Iran will pose a major damage to Iraqi ports."

He also pointed out that the rail link will greatly benefit the Iranian and Syrian sides, while Iraq will be greatly affected by it, "Iran needs only 32 km of railway lines within its territory to the Iraqi railways (Shalamaja-Basra)."

On the other hand, there is a study to connect Iraq and Turkey via a 45-kilometers-long railway, to be the first country linked to Iraq from Rabia district of Nineveh governorate to the town of Fishkhabur in Duhok governorate.

The Saudi Ministry of Transport revealed a project a few days ago linking 10 Saudi cities with Iraq, including Riyadh and Qassim within the kingdom, linking east to west, and passing through Yanbaa', the Port of King Abdullah, Jeddah, Riyadh, Dammam, Jubail, and Ras al-Khair.

According to economist Abdul Rahman al-Mashhadani, "The rail link with Saudi Arabia does not raise concerns and is less dangerous than other railways with neighboring countries, especially since it will link the western regions (Mecca and Medina) to Iraq. Therefore, it can be useful for religious tourism beside its commercial uses... In any case, the problem will be a threat to Iraqi industry and agriculture."

"The type of connection whether for transporting commodities, oil, or for travelers, where it starts, where it ends, whether Iraq is its final stop or merely a transit station.. all these factors decide whether the linkage will affect Iraqi ports and its soon-to-be-established dry canal," economist Dhurgham Mohammed Ali told Shafaq News Agency.

"Treating goods received as imported rather than transit will reduce its impact on the ports. However, if they are dealt with as transit-only goods, Iraqi Ports will certainly be affected," he added.

He also explained that the railway project announced by Saudi Arabia and Iraq, in general, does not affect the dry canal as it will be a trade project between the two countries and therefore will reduce the cost of goods transportation between the two countries, encourage trade, and increase the chances of establishing a passenger train that enhances economic opportunities, "It is also possible that there will be a fast railway in the future to perform Hajj (the pilgrimage to the holy city of Mecca) and Umrah rituals that will reduce the cost and shorten the road."

He added that the project would not be extended to other countries so that it does not become an alternative or competitor to the proposed dry channel.

Experts emphasize Iraq's need for comprehensive development of road and rail transport networks so that the country can compete and become a cargo corridor, starting from al-Faw Grand Port to Turkey and from there to Europe.

For its part, the Ministry of Transport confirmed that it has begun to develop the railways in conjunction with the establishment of al-Faw Grand Port, due to the economic importance of rail connectivity with neighboring countries.

"International rail connectivity is of great economic importance, as any rail link with neighboring countries will achieve economic development and generate a lot of revenues, whether for Iraq or the country that wants to connect," Talib Jawad al-Husseini, director-general of the Iraqi Railway Company, told Shafaq News agency.

"Rail connectivity is a key pillar of countries' development as well as the economic recovery, for many reasons: speed, safety, and the large quantities that can be transported through trains compared to other transportation means. Also, the prices are competitive and thus achieve the desired goal for both the buyer and transporter, creating job opportunities, and establishing joint venture for goods exchangeat the borders,” al-Husseini continued.

"Studies, designs, and the development of the railway network require significant funds and long time to be finalized," he said.

Earlier, the head of Kurdistan's Regional Government, Masrour Barzani, received the CEO of The German railway company Deutsche Bahn in Europe, the Near East, and the Middle East, Vincent van Houten, who stressed the importance of the strategic project for the rail link between Kurdistan's governorates, Iraq, and neighboring countries.

During the meeting, PM Barzani laid emphasis on the need to implement this "vital and strategic project" to build a strong economic infrastructure for Kurdistan, link the cities together, and promote trade exchanges between Kurdistan, the rest of Iraq, neighboring countries, and the world.

Similar topics
» Launching the activities of the second international forum "Belt and Road" in China
» China's foreign trade with the belt and road up to 298.2 billion
» Iraq wants China to be part of the "Silk Road"
» Abdul Mahdi is visiting China and these are the most prominent files
» China is spending nearly $1 trillion to rebuild the Silk Road