Iraqi parliament to form a committee to oversee the CBI's work, source

Iraqi parliament to form a committee to oversee the CBI's work, source 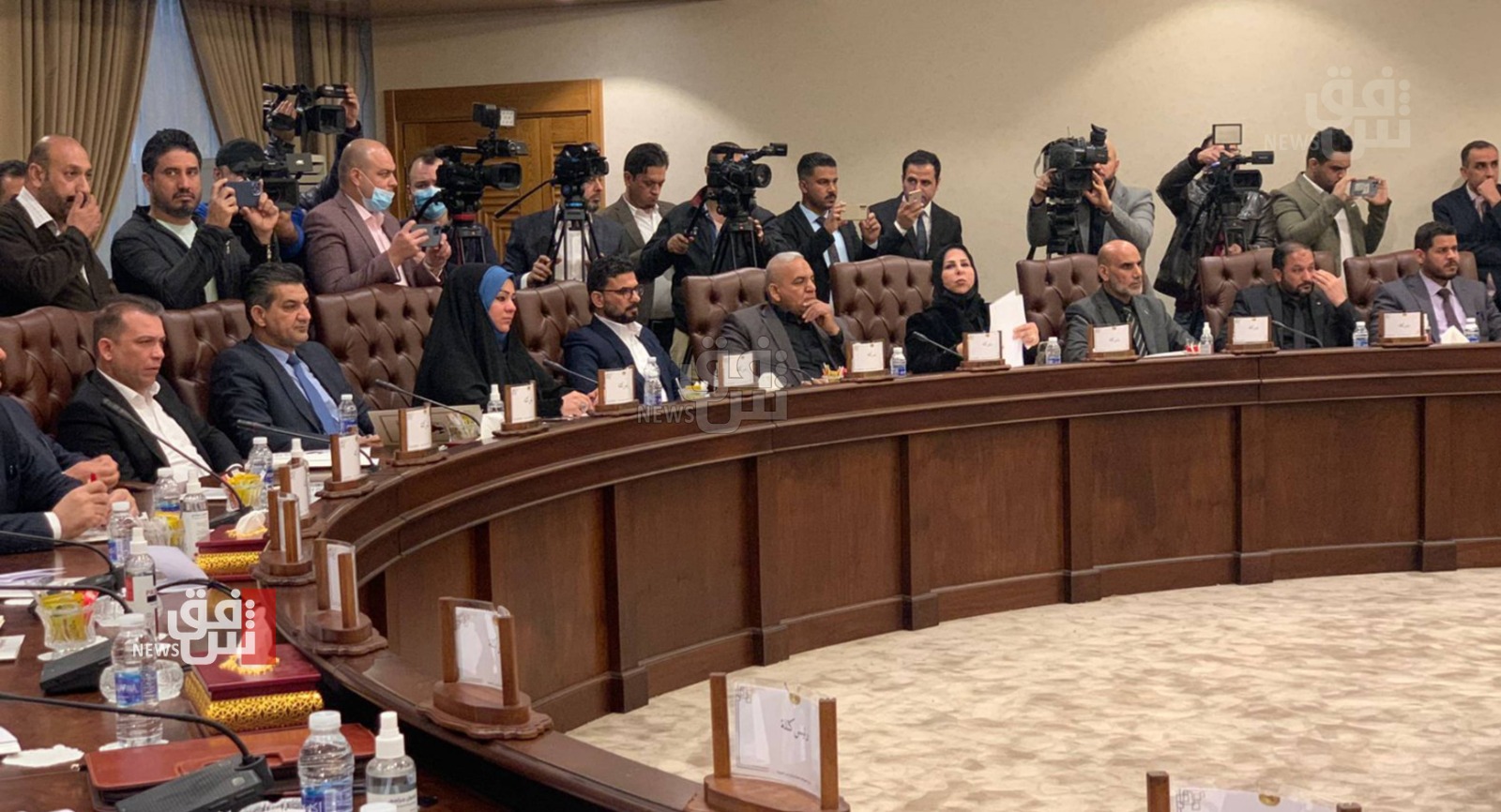 Shafaq News/ The Iraqi lawmaking body opted to form a parliamentary committee to oversee the financial and economic policy and the performance of the Central Bank of Iraq (CBI) , a source from inside the bureau of the parliament's first deputy speaker, Hakem al-Zameli, revealed on Saturday.

The source told Shafaq News Agency that al-Zameli convened, along with the heads of the parliamentary blocs, with the CBI governor, Mustafa Ghaleb Makhif, for a secretive conclave to ponder ways of reversing the devaluation of the Iraqi dinar and gain first-hand information about the work of the CBI.

"An agreement was reached to form a committee headed by al-Zameli himself. Lawmakers specialized in the financial and economic affairs will be nominated by the parliamentary blocs for the membership of the committee whose mission will be scrutinizing the financial and monetary policies, as well as the matters relevant to the Central Bank's work."

"The Committee will commence its work as soon as the nominations are made and the parliament presidium signs  the ratification documents."

Iraq's legislative body convened on Saturday to discuss the status of the US dollar exchange rate against the local currency amid a boycott by the Ministry of Finance.

The meeting chaired by Deputy Parliament Speaker, Hakem al-Zameli, was attended by the governor of the Central Bank of Iraq (CBI), Mustafa Ghaleb Makhif, along with his deputy and a group of CBI executives.

Neither Minister of Finance Ali Abdul-Amir Allawi nor representatives from his ministry attended the session, according to Shafaq News Agency correspondent.

Iraqi Minister of Finance, Ali Abdul-Amir Allawi, requested holding a vote of confidence over his Ministry's handling of the financial policies.

In a letter he sent to the Parliament Presidium, Allawi said that he will not be able to attend the session scheduled for today.

"I will submit an official request to the Parliament for a confidence vote. I will always be ready to cooperate," Allawi said in the letter publicly read by al-Zameli.

Al-Zameli said in the session's inauguration speech that Minister Allawi will be questioned for not appearing before the Parliament, indicating that the meeting was intended to discuss the financial and monetary challenges facing the country.

"We were surprised that the Finance Minister did not show up to the meeting," he said, "some leaders contacted us asking to temporize the issue of the Minister. If we did not exercise our oversight role now, the parliament will never do, and no Minister would be summoned again."

"We heard that the Minister is considering resignation. It is his right. Still, there are files to be discussed. MPs signed a request to summon him."

"Even if he resigned, he will not escape accountability. We have documents that incriminate him," he said, "until he appears before the parliament, we will issue a travel ban against him."

On Thursday, the Iraqi Parliament Presidium summoned Minister of Finance, Ali Abdul-Amir Allawi, and the Governor of Iraq's Central Bank, Mustafa Ghaleb Makhif, to appear before it for questioning.

The decision was taken in response to recommendations made by the leader of the Sadrist movement, Muqtada al-Sadr, a statement of the Parliament's Presidium said.

Al-Sadr on Thursday cracked a list of recommendations he believes it might contribute to leaching the volatile exchange rate of the U.S. dollar against the Iraqi dinar.

Earlier on Wednesday, al-Sadr said in a tweet that the Iraqi citizens shall not be burdened by the downsides of the dinar devaluation, calling on the Iraqi government to take firm steps to curb the rise of prices.

Similar topics
» Central Bank form a committee to oversee the distribution of funds for Bmodei Dar es Salaam
» Source: Maliki has plans to dissolve parliament in form an interim government
» Legal representative: There is no justification for Parliament not to form a committee of Article 140
» The Cabinet's Committee Completed Its Work And The Budget Will Reach The Parliament Today
» Iraqi oil surprised by the decision of the Iraqi parliament to stop the work of a technical company belonging to Kurdistan in Kirkuk