In the latest classification of Transparency International, learn about Iraq's ranking in the Corruption Index for the year 2021

In the latest classification of Transparency International, learn about Iraq's ranking in the Corruption Index for the year 2021 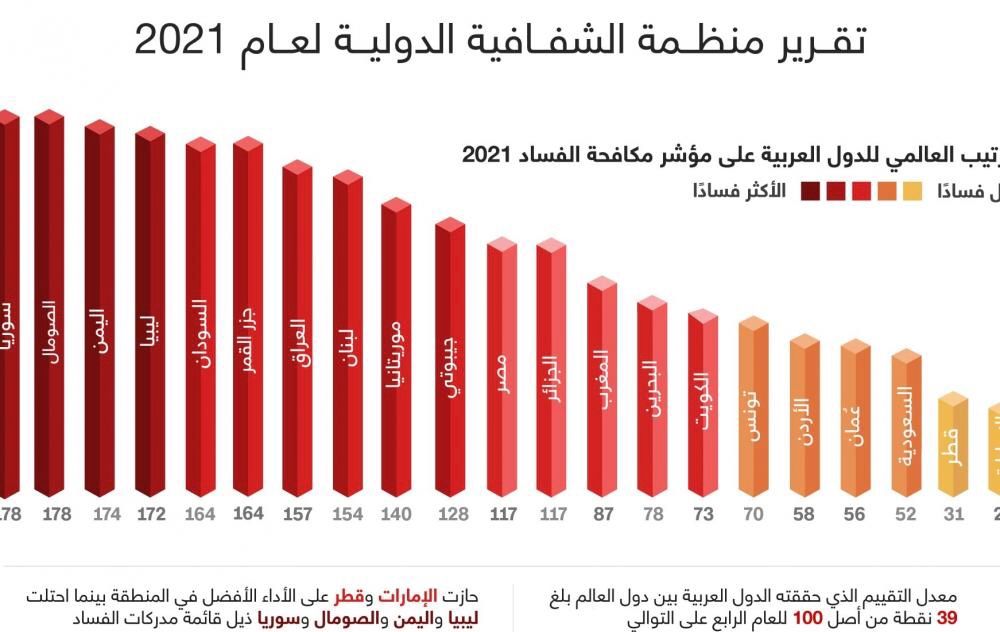 Baghdad / NINA / - Transparency International confirmed that corruption in the countries of the world "maintained its stability" in its analysis of "corruption indicators" for the year 2021, warning of the negative effects of not fighting this phenomenon on the human rights situation in the world, and it also threatens efforts to combat the Corona epidemic. .

"While corruption takes significantly different forms from one country to another, this year's findings reveal that all regions of the world are at a standstill when it comes to fighting corruption in the public sector," the organization said in a report.

The report found that "rights, checks and balances are increasingly undermined not only in countries with systemic corruption and weak institutions, but also among well-established democracies."

“In the Middle East and North Africa, the interests of a powerful few continue to dominate the political and private spheres, and restrictions on civil and political liberties impede any tangible progress,” the organization added. Anti-corruption obligations deprive citizens of their basic rights and services.

The analysis shows that as many as 131 out of 180 countries have failed to make any meaningful progress in fighting corruption over the past decade, with more than twenty countries' reputations reaching an all-time low.

This is the first annual report that contains a combined ten-year study of each country.

Last year, the Biden administration asked a group of executive branch departments and agencies to identify ways in which it could strengthen its fight against corruption.

Countries with the highest transparency

Denmark, Finland, Norway, Singapore, Sweden, Switzerland, the Netherlands, Luxembourg and Germany came in the top ten places on the list.

The UAE was the highest Arab country in the transparency index, and ranked 24, down two places from 2020, and scored 69 points on the transparency scale. Qatar ranked second in the Arab world, 31 on the list, and 63 points.

The United States maintained its 27th place globally, with a score of 67 on the transparency index, a decline that continued over the past years, while China ranked 66th, achieving 45 degrees, and Russia 136th, with 29 degrees.

The analysis showed that the momentum required by the authorities’ response to the COVID-19 pandemic in many places weighed on efforts required for accountability. ./finished8