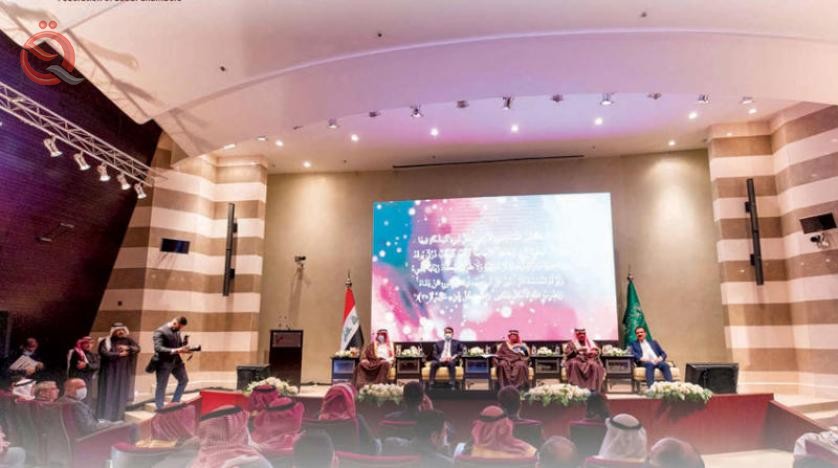 While the activities of the Saudi-Iraqi Joint Business Forum were launched in the Saudi capital, Riyadh, with a wide participation of Saudi and Iraqi ministers, officials and business owners, Saudi and Iraqi ministers stressed opening a new page in the history of comprehensive cooperation between the two countries at all levels, pledging to overcome all problems that stand in the way Trade and investments between the two countries, expecting an increase in new land outlets to maximize the strategic partnership between Riyadh and Baghdad .

On the sidelines of the Saudi-Iraqi forum, the ministers announced the imminent signing of a memorandum of electrical interconnection between the two countries, which would enhance the regional market for electricity trade in addition to renewable energy projects, and provide an enhanced opportunity for joint investments in the oil and gas sectors, agriculture, petrochemicals and smart cities .

Al-Ghazi pointed to the opening of the Saudi commercial attaché in Iraq, as well as the signing of many agreements and memoranda of understanding, noting that the technical committees of the council are working on a number of important files such as electrical interconnection and promoting joint investment in the fields of oil, gas, agriculture, petrochemicals and smart industrial cities, where the connection memorandum will be signed. Electricity between the two countries in a way that enhances the regional market for electricity trade in addition to renewable energy projects .

The Secretary-General of the Iraqi Council of Ministers stressed that the pillars of Vision 2030 are a major starting point for the strategic partnership between the two countries, and the Green Middle East Initiative, the Green Saudi Arabia and the Green Belt Project in Iraq constitute one of the important areas of cooperation, as the delegation of the Iraqi Ministry of Agriculture will arrive next week to the Kingdom to discuss opportunities for cooperation and partnership between the two countries. The two countries are involved in the fields of agriculture, irrigation systems and manufacturing industries, including dates .

He said, "The Iraqi government worked to correct the paths to bring about a real economic transformation in a way that supports economic and human development and the creation of job opportunities for Iraqi citizens," stressing that the political will in the two countries is real and serious towards developing economic relations and interests, indicating that this is confirmed by the growth in the volume of trade exchange by 15 percent last year, which is considered a step in the right direction, noting at the same time that Iraqi laws are enough to protect the Saudi investor and that negative cases are addressed and resolved, calling for the next forum to be held in Baghdad .

Fundamentals of growth and prosperity

For his part, Dr. Majid Al-Qasabi, Saudi Minister of Commerce, touched on the availability of the elements for growth and prosperity for Saudi-Iraqi economic relations, pointing out that the political will is supportive and the opportunities and possibilities are great, stressing the need to launch an annual joint business forum, with the importance of establishing a huge information store to increase the definition of investment opportunities available in Both countries and the development of a joint action plan to translate aspirations and hopes for real opportunities that contribute to strengthening trade and investment relations between the two countries .

The participants in the Saudi-Iraqi Forum, organized by the Federation of Saudi Chambers, reviewed investment opportunities in both the Kingdom and Iraq in a number of promising economic sectors, while the forum witnessed the signing of a number of agreements and memoranda of understanding between Saudi government and private agencies, in several vital areas .

Ajlan Al-Ajlan, President of the Federation of Saudi Chambers, said that deepening bilateral relations by becoming a distinguished model of trade and investment partnership relations that are characterized by strength, stability and stability .

According to Al-Ajlan, Iraq is ranked 11th among Arab countries in the volume of trade exchange with Saudi Arabia, noting that these numbers are to some extent motivating and good, but they are not commensurate with the historical relationship between the two countries, and do not reflect the aspirations of both sides .

For his part, Abdul Razzaq Al-Zuhairi, head of the Federation of Iraqi Chambers of Commerce, said that Saudi Arabia represents a strategic depth for Iraq with its great potential as an active country in the global economy and within the G-20 countries, adding that the changes that the global economy is going through after Corona requires the formation of an economic bloc between Iraq The Kingdom and the Gulf Cooperation Council countries .

On the other hand, according to Al-Zuhairi, Iraq possesses fresh water, resources and capabilities, while the Kingdom possesses energy, financial capacity and high expertise, stressing the importance of strengthening communication between the Saudi and Iraqi private sectors through the Joint Business Council to keep pace with the development and interest in relations between the two countries.