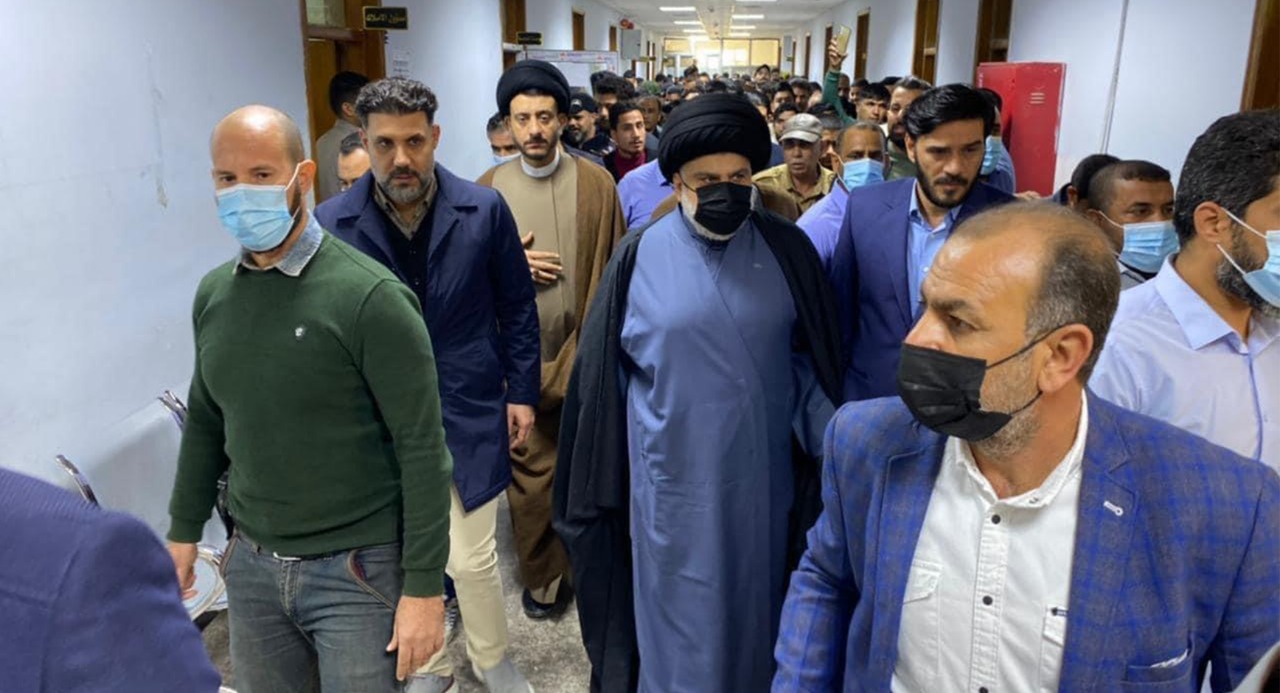 Shafaq News / In a dramatic parliamentary session on January 9, the new Iraqi parliament reelected Mohamed al-Halbousi for a second term as speaker. While the vote further widened intra-Shia divisions, it also revealed Shia cleric Muqtada al-Sadr’s ability to change political dynamics across Iraq. The Sadrist Movement, the Sunni Taqadum and al-Azim alliance, the Kurdistan Democratic Party (KDP), and other smaller factions attended the session and voted for Halbousi and his two deputies.

According to the Iraqi constitution, the parliament has thirty days from the first session to elect the country's new president, who will then ask the largest bloc in parliament to form a government. To date, there is no agreement between Iraq’s main political powers. The post-2003 system in Iraq is centered on an informal power-sharing arrangement among Shia Arabs, Sunni Arabs, and Kurds. Under this informal system, the prime minister’s post is reserved for a Shia, the position of speaker is reserved for a Sunni, and the president is required to be a Kurd.

Halbousi’s election can be seen as a victory for Sadr’s bloc over the Coordination Framework, a bloc that is largely aligned with Iran. Today, the political representation of the Iraqi Shia community is clearly divided into two main blocs. The first is the Sadrist Movement, which is led by the cleric Muqtada al-Sadr, one of Iraq’s most visible post-2003 political leaders. The other Shia bloc is the Coordination Framework, a loose coalition of mainly Shia parties that includes two former prime ministers and other influential Shia political figures.

The Sadrists claimed nearly 40 percent of the seats won by Shia in the October 2021 election. Due to the complex nature of its coalition, it is still unclear how many seats the Coordination Framework will command. Nevertheless, it appears that they will control at least seventy seats.

Sadr is serious about forming a majority government, which would challenge the post-2003 status quo in Iraq. At the same time, he knows that he has no guaranteed support from the other parties. While the Sunnis and the KDP joined Sadr in the vote for speaker, electing a president and prime minister is much more complex. Any Sadrist national majority government will depend on the support of the KDP and the new alliance between Taqaddum and al-Azim, the major political winners among Iraq’s Kurds and Sunnis. With the seats of another Kurdish party, the Patriotic Union of Kurdistan, Sadr could also lead a new government. On the other hand, Sadr could form a national majority government by dividing the Coordination Framework and gaining the support of Shia alliances such as the National Power of the State Coalition and the Fatah Alliance.

Sadr will face three key challenges in any attempt to form an alliance with the Kurds and Sunnis. First, though an understanding between Sadr, Barzani, and Halbousi existed prior to the election, the KDP and the Sunni parties have so far rejected the idea of forming an alliance with just one Shia bloc. In addition, former Prime Minister Nouri al-Maliki, the Coordination Framework’s leader, has tried to create new alliances in an attempt to increase the Framework’s seats. This has created a balance of seats between the two Sunni blocs, making it difficult for Halbousi to claim sole leadership or representation of Iraq’s Sunnis. Finally, if Sadr does manage to obtain the support of the KDP and Halbousi, the Sadrists—the Shia component of the coalition—will not constitute a majority, making it the first government not dominated by Shia since 2003. This may make it a struggle for the coalition to win the support of the Shia community.

These challenges make it more likely that Sadr will try to reach out to Shia powers within the Coordination Framework to form a Sadr-led consensus government. The Sadrists may also consider settling as the opposition. The latter option may hold some appeal for Sadr, who has always presented himself as a renegade who holds the government in Baghdad to account. Sadr’s supporters, who do not question his choices, may see Sadr as a true leader who sacrificed political power for the sake of the nation. This would not be the first time that Sadr threatened to leave a government and join the opposition. What is different today is that the Sadrists hold over seventy seats and could gain the support of smaller factions in order to create a sizable opposition bloc. If Sadr decides to take this path, he will create the most significant opposition force in the post-2003 Iraqi political system.

However, there are significant barriers that likely outweigh the perceived benefits of forming an opposition coalition. If Sadr does form an opposition coalition, it will only be because he has been prevented from forming a majority government. Considering the personal rivalry between Maliki and Sadr, this outcome will have broader implications for Sadr’s image and credibility.

Losing out on the ability to make appointments for the thousands of senior and special posts in the Iraqi government may also make Sadr hesitate to form an opposition coalition. Controlling these appointments allows politicians to direct national policy and advance their own political, ethnosectarian, and economic interests. Being in the opposition would prevent Sadr from taking advantage of this opportunity.

While Sadr enjoys a disciplined base and can afford to change his positions without losing support, he knows that his victory was largely due to the Sadrists’ skillful handling of new electoral laws. While they gained nineteen seats in the recent election, their share of the popular vote decreased significantly. For many political activists within the Sadrist Movement, especially those who worked hard during the election campaign, being in the opposition would prevent them from reaping the rewards that they believe Sadr owes them.

Lastly, if Sadr is not included in the next government, the Coordination Framework and the militias aligned with it will dominate Iraq. This would allow the militias to continue operating outside of Iraq’s security forces without facing pressure from the government. The crackdown on illegally owned weapons that Sadr campaigned on would not be implemented, and Sadr would disappoint the international supporters who saw in him a means to reduce the influence of pro-Iranian armed groups.