Wars In Afghanistan, Iraq ‘Not Worth Fighting,’ 60%+ Say

Wars In Afghanistan, Iraq ‘Not Worth Fighting,’ 60%+ Say 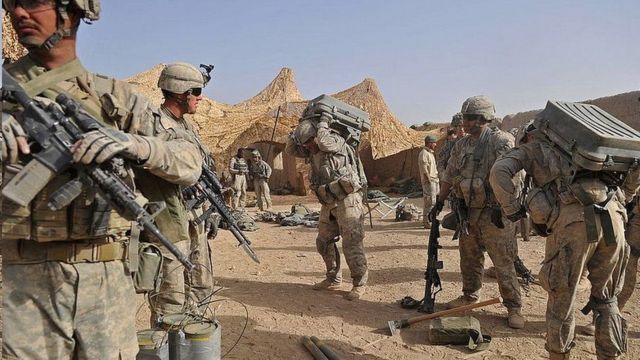 Shafaq News/ A sizable majority of Americans believe that the wars in Iraq and Afghanistan were “not worth fighting,” according to an AP-NORC poll released Tuesday, a sign of public fatigue in the wake of the U.S. withdrawal from Afghanistan after nearly two decades and the continuing presence of 2,500 troops in Iraq.

· Americans were asked their opinions on the wars in mid-August—as the Taliban swept into the Afghan capital and supplanted the central government—as part of a wide-ranging poll on national security and the coronavirus pandemic.

· Some 62% of respondents told pollsters that the war in Afghanistan had not been worth it, while 63% said the same of the war in Iraq.

· The most common worry among Americans polled was “the spread of misinformation,” with 75% telling pollsters they were worried or very worried about it.

· The next most-commonly shared concerns were cyberattacks, which worried 67% of respondents, followed by the spread of infectious diseases and the danger of extremists in the U.S., about which 65% of Americans said they were worried or very worried.

· More Americans are concerned about “China’s influence around the world,” according to the poll, which 57% of respondents agreed to, than about the nuclear programs of Iran and North Korea—about which 48% and 47% expressed concern, respectively—and the 45% of those who are worried about Russia’s global influence.

· Some 53% of respondents said they are worried about climate change, while 45% said illegal immigration concerned them.

At their highest points, American support for the wars in Afghanistan and Iraq ranged from large majorities to nearly unanimous.

In early 2002, months after invading Afghanistan and attacking the Taliban, 93% of respondents said they supported the war, according to a Gallup poll at the time.

In March 2003, as U.S. troops invaded Iraq, 72% of respondents told Gallup they supported the war. Support for spying, powers for which were vastly expanded as part of the Global War On Terror, has also fallen. In August, fewer than one in five Americans told pollsters that they supported warrantless spying on American phone calls and emails, a drop from a 2011 poll that showed 30% supported email surveillance and 23% supported phone tapping.

Support for spying on emails and calls outside the U.S. also fell, to 27% and 28%, respectively.

Similar topics
» This all may have read about the wars in Iraq and Syria wrong
» INTEL Update (Real Crazy News) - "Wars End" 4/25/17 Wars End 4/25/17
» After Afghanistan, Iraq could collapse fast; warns former spy chief
» The Agent Orange of Iraq and Afghanistan
» After 22 years and two wars Debt burdens Iraq