Foreign Minister: Iraq has moved to the stage of economic cooperation and partnerships

Foreign Minister: Iraq has moved to the stage of economic cooperation and partnerships 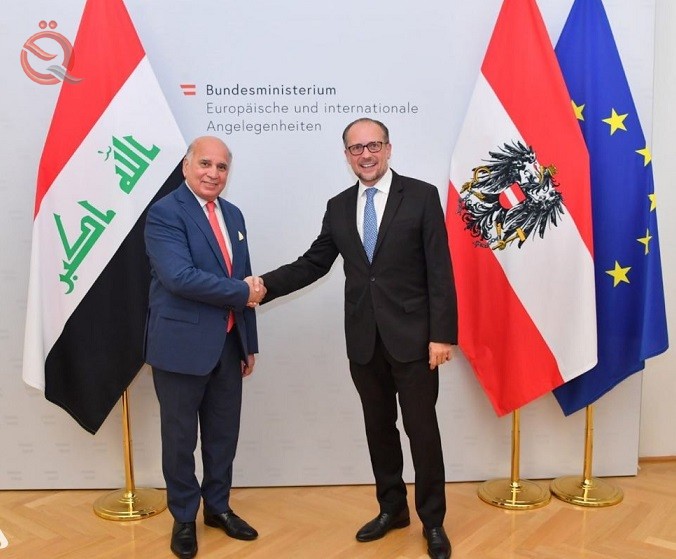 Foreign Minister Fouad Hussein discussed with his Austrian counterpart Iraq's active role in bringing the views of the neighboring countries closer to resolving some problems of common interest, and moving from the stage of differences to the stage of economic cooperation and partnerships in a way that serves security and stability in Iraq and the region.

And the Foreign Ministry said in a statement received by "Economy News", that "Foreign Minister Fouad Hussein met his Austrian counterpart Alexander Schallenberg in the capital, Vienna, to discuss ways of strengthening bilateral relations between the two friendly countries. cooperation to eliminate terrorism and restore security and stability to the region.

He Aleban that "Hussein and Chalnberg also discussed the Iraqi government 's efforts and its diplomacy quiet holding Baghdad conference for cooperation and partnership , which was held in 28.08.2021, which confirmed the participants to support Iraq politically, economically and security, and non - interference in its internal affairs.

And the price of the Minister The important and pioneering role of Iraqi diplomacy in the region and the importance of the continuity of this role for security and joint action in the region. He stressed that Austria also within the European Union strongly supports this role.

Hussein stressed that "Iraq's foreign policy is based on balance in its relations with its external environment, and Iraq was able to establish The platform and tools for dialogue, and Baghdad has turned into a center for communication and positive interaction,”

noting that “the government is making all efforts to develop the economy and multiply financial resources through revitalizing the agriculture, industry and tourism sectors.”

The two sides also discussed holding the upcoming Iraqi elections under international and European monitoring, and the need for cooperation and exchange of experiences in the security field to confront ISIS terrorist cells in Iraq. They also discussed the issue of migration and Iraqi immigrants and the Iraqi government's measures in this aspect.

Minister Hussein expressed Iraq's keenness on bilateral cooperation for the benefit of the peoples of the two friendly countries, in addition to strengthening coordination mechanisms and political consultation on regional and international issues of common concern, and resuming the meetings of the Iraqi-Austrian joint committee as a framework for activating bilateral cooperation between Baghdad and Vienna.

He also valued Austria's supportive stances for Iraq in various fields, including: within the framework of the international and humanitarian coalition, and their contribution to the reconstruction of liberated cities, calling for the reopening of the Austrian embassy in Baghdad.

For his part, Austrian Foreign Minister Alexander Schallenberg expressed his country's aspiration to strengthen bilateral relations with Iraq and achieve a qualitative leap in cooperation between the two countries, expressing his country's readiness to support Iraq in achieving security, stability and reconstruction.