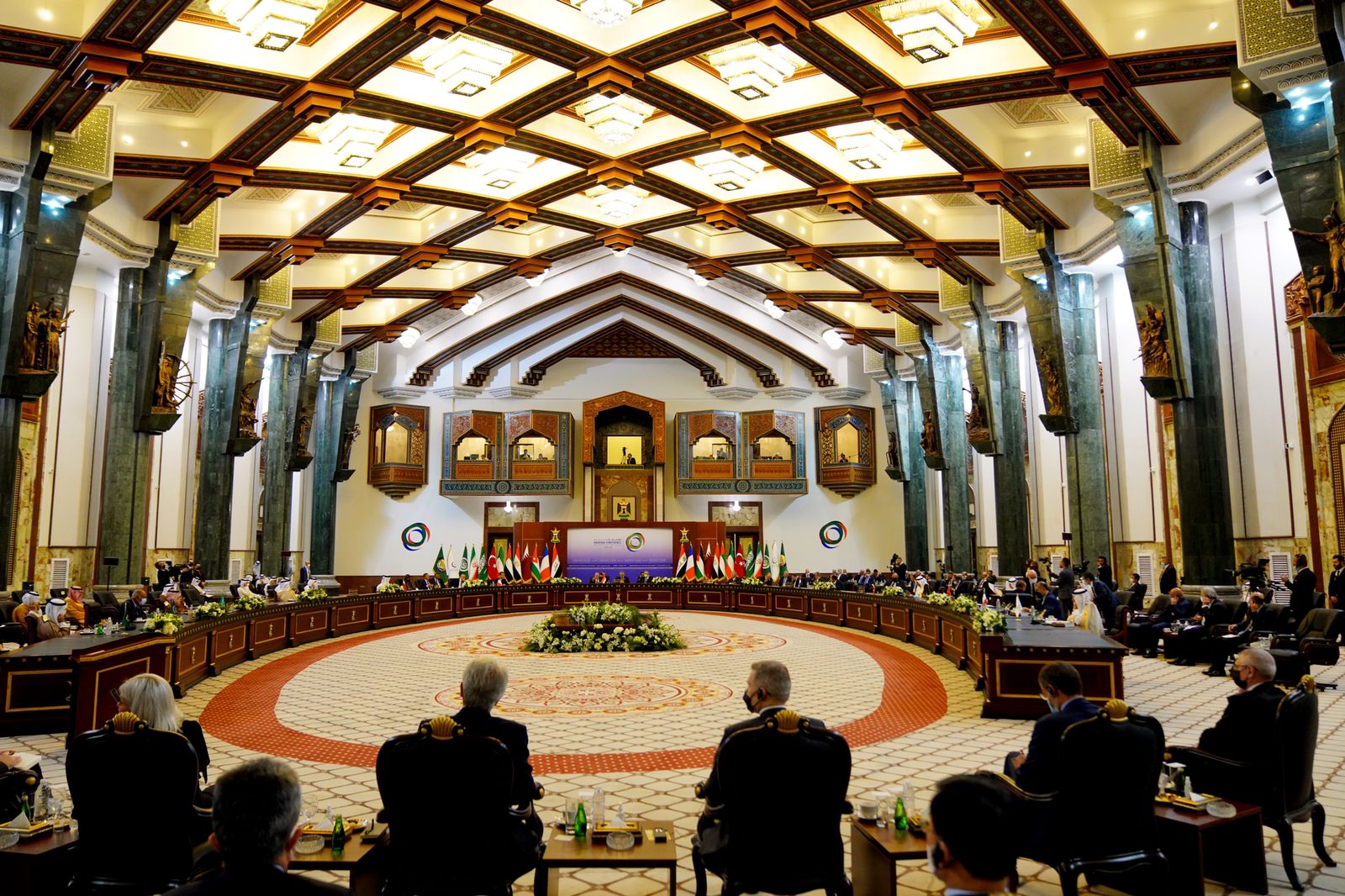 Shafaq News /  The words of the leaders and officials who participated in the Baghdad Conference for Cooperation and Partnership reflect not only the importance Iraq represents to their countries at the moment, but also the prospects it raises for the future, both politically and economically.

Those aspects were evident in the speeches of country leaders like the Emir of Qatar, the King of Jordan, the Egyptian president, and the French president, and officials who represented their countries as ruler of Dubai, Sheikh Rashid bin Mohammed, or foreign ministers of Turkey, Iran, and Saudi Arabia.

Iraqi Prime Minister Mustafa al-Kadhimi sought to reassure the audience and the countries they represent that Iraq is seeking to restore normal life in its cities, noting that international observation of the elections serves this trend and that there is no return to wars and tense relations with neighbors.

Al-Kadhimi's key speech was, "This historical moment is appropriate to say that we, as the countries and peoples of our region, have much greater in common than what divides it."

The central objective of this summit seemed to be to reunite, dispel the regional division, and try to unify visions.

Saudi Foreign Minister Faisal bin Farhan summed up his country's positions by emphasizing the importance the kingdom attaches to Iraq now and in the future, saying that Saudi Arabia continues to coordinate with Iraq and the region's countries to combat plans of extremism and terrorism. He also emphasized K.S.A.'s support and work to preserve Baghdad's security and stability.

The Saudi minister sent positive signals regarding speculation and hopes for a Saudi-Iranian rapprochement, expressing the willingness of the Saudi diplomacy to "endorse peace and dialogue, and reduce conflicts". However, he did not miss the opportunity to criticize Iran's role in Iraq when he said the kingdom supports "the Iraqi government's efforts to control the militias' arms."

Faisal bin Farhan pointed out the concern to establish security and stability in the region, "It requires the stability of Iraq and its linking to its Arab depth and Islamic atmosphere."

Just as there were hopes for the presence of Saudi Crown Prince Mohammed bin Salman, after al-Kadhimi invited him, other bets were also linked to the possibility of the participation of the new Iranian president Ibrahim Raisi, which would have been his first foreign appearance since taking office. However, similar to K.S.A., that also did not happen. The new foreign minister, Hossein Amir-Abdullahian, who is described as a veteran of regional files, was assigned to represent Tehran at the Baghdad summit.

Besides the above, Abdullahian's statement could be useful for Baghdad, because it catalyzes Arab countries participating in the summit to improve their economic relations with Iraq, which has been "forgotten" by Arab governments since after the 2003 U.S. invasion, according to analysts and observers, for a variety of reasons, including concern about post-Saddam Hussein governments, as well as panic of Iranian influence in Iraq.

Contrary to criticism that Iran is contributing to the weakening of Iraq, Abdullahian said, "Iran supports the security, stability, territorial integrity, strength, and regional and international status of Iraq."

What was not said during the summit itself was mentioned before it, when Abdullahian said, "Tehran welcomes any regional initiative of the Iraqi officials, in which the countries of the region participate," adding, "Syria, as an important neighbor of Iraq, should have been invited to attend the summit."

Kuwaiti Prime Minister Sheikh Sabah Khalid al-Hamad al-Sabah made more than one statement and reflected Kuwait's understanding of the sensitivity of the Iraqi situation.

Kuwait was the country that suffered when reckless policies hit it in the Saddam era. However, during the summit, its prime minister said, "Our region will not be stable unless stability is achieved in Iraq."

And because Kuwait understands the sensitivity and danger of terrorism to Iraq and the region, it stated that it stands with Iraq, supports the reconstruction of cities affected by terrorism, and is committed to supporting Iraq and rebuilding it until it regains its regional role.

Qatar's presence was through Prince Tamim bin Hamad, and was also of great interest, first because it was Sheikh Tamim's first visit to Baghdad. Secondly, the relations between Doha and Riyadh, Abu Dhabi, and Cairo had just been revived.

Qatar can also play a major role in supporting Iraq in the reconstruction process, "The region is going through challenges and crises that threaten international peace and security, and Iraq is qualified to play a pivotal role in building peace in the region. That is why we declare our support for it," Sheikh Tamim said.

French President Emmanuel Macron's presence gave weight to the Baghdad summit, and, as Iraqi officials have revealed, he has contributed to contacts and preparations for the summit's arrangement and success.

Macron's speech was also important, saying that the whole region faces the same challenges. Still, Iraq must be able to play a full role in maintaining peace, "Iraq has suffered a lot because of wars and conflicts, and we are continuing to stand with it in the fight against terrorism."

Because he is also aware of the sensitivity of the upcoming elections in Iraq and the possibility of contributing to Iraqi stability, Macron said that missions from the European Union and the United Nations would observe Iraq's elections.

Egyptian President Abdel Fattah al-Sisi addressed Iraqis directly when he said, "The people who have this honorable history and this ancient civilization undoubtedly have a promising future."

"You are an ancient nation of prestige, civilization, and history, and you have the diversity that I consider to be very rich. Keep your country, build, cooperate, and participate. Build your future and the future of your children, build your cities, farms, and factories. Cooperate for the future, and participate in choosing who will lead you forward. Elections are a great responsibility to build the future of nations," al-Sisi added.

"Iraq deserves high status, sophistication, development, stability, security, and peace. I pray to God to grace us all with success," he continued.

However, the personal aspect was not the only part in al-Sisi's speech betting on consolidating the Egyptian-Iraqi relations, which took an orderly form through the trilateral summit with al-Kadhimi and the King of Jordan.

Al-Sisi also said that Egypt rejects all attacks, interferences in Iraqi affairs, and abuse of its territory.

Jordan's King Abdullah II said that he was glad to be in Baghdad for the second time in less than two months, "Our meeting today is a sign of Iraq's central role in building bridges and rapprochement. Supporting Iraq is a priority for all of us."

The King of Jordan said that Iraq has been working hard to consolidate the constitution's state and the law for years.

Turkish Foreign Minister Mevlut Cavusoglu, representing Turkey, came in place of President Recep Tayyip Erdogan. However, the messages he carried had great connotations, "We are ready to contribute to the construction of a highway and railway from Faysh Khabur to Baghdad, the rehabilitation of highways and railways between Baghdad and Basra, the establishment of an industrial zone in Mosul, the development of the al-Faw port, and the development of irrigation and water management projects."

Noting that there can be no economic development without security, he said, "There is no place for terrorism in the future of the region, and as a country fighting terrorist organizations such as ISIS, P.K.K., U.B.J., and Gulen, we are fully aware of the dark face of terrorism."

"We will never accept the presence of P.K.K. in Iraq, and we expect all neighboring countries to support our war against this terrorist organization," Cavusoglu said.

"It is time to set aside our differences and focus on our common points, as the peoples of this region, we know our problems better and can solve them ourselves," Cavusoglu added, noting, "External interferences will not bring a solution to regional problems."

He also expressed Turkey's hope that the Baghdad conference would revive regional dialogue.

The U.A.E. Prime Minister Sheikh Mohammed bin Rashid Al Maktoum added his touch to his presence in Iraq and his participation in the summit, tweeting as soon as arriving in Baghdad, "We have thankfully arrived in Baghdad, the capital of Al-Rasheed and Al-Maamoun, the capital of the world, Darul Salaam (the house of peace), the house of human wisdom, poets, writers, and scholars, Tigris and Euphrates's Baghdad."

"Despite its wounds, we are optimistic that Baghdad will return, rise, and renew. May God bless Baghdad and save the great people of Iraq," he said.

In addition, Mohammed bin Rashid met with Iran's new minister and the Emir of Qatar, serving the summit's aspirations to break the ice between the two rivals and cool the tense files in the region.

Overall, the conference indicates that Iraq, which has gradually regained its confidence and regional role, can initiate reunification in all directions.

It is not unusual for Iraq to move to reunite regional and international parties, from Iran, Saudi Arabia, and Turkey, to Qatar and the United Arab Emirates, in what is effectively a "mini-international summit".

Similar topics
» Saleh Macron by phone: The need to ease regional tensions and continue fighting terrorism
» Barham Salih assures a Russian envoy the need to support regional dialogue to ease tensions
» A high-ranking delegation from the Kurdistan Regional Government arrives in Baghdad
» Saleh discusses with UN the need to ease tensions in the region
» The House of Representatives completes its preparations to host the Baghdad summit of heads of parliaments of neighboring countries