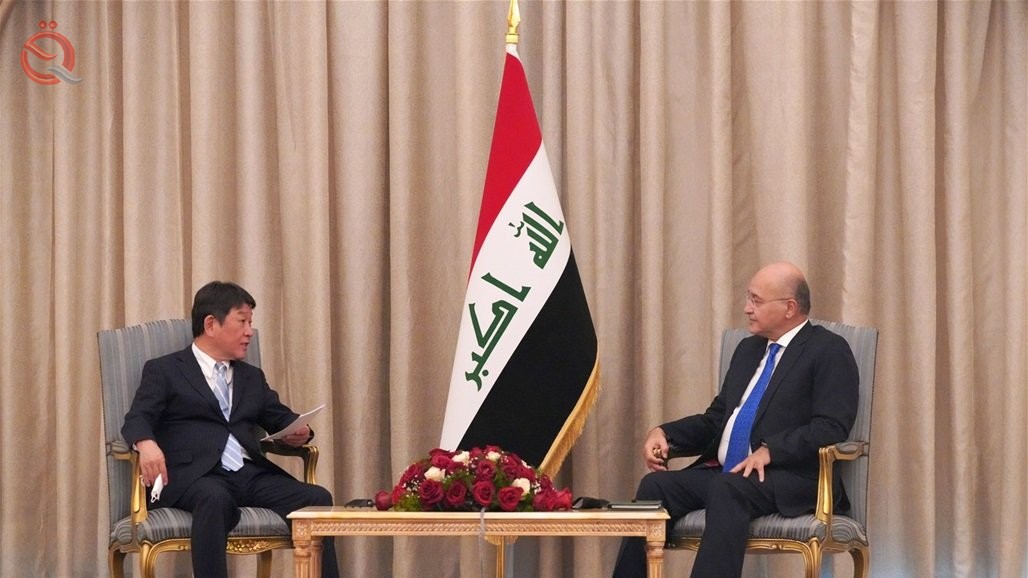 Japanese Foreign Minister Toshimitsu Motegi expressed Japan's support for the government's economic reform program represented by the White Paper programs, and reiterated Japan's readiness to support the implementation of the White Paper, through the Economic Interaction Group formed in late 2020.

And he stressed, "His country is continuing to provide aid and cooperation programs with Iraq in the field of combating terrorism, combating extremism, and confronting the Corona pandemic."

A presidential statement stated, "President Barham Salih received at the Peace Palace in Baghdad, Japanese Foreign Minister Toshimitsu Motegi, and during the meeting, they discussed friendship and joint cooperation between the two countries dating back decades, and affirmed the common will towards strengthening relations in various economic and trade fields." and industrial, and the role of Japanese companies in the reconstruction of Iraq and the transfer of technological expertise to Iraq, praising the types of support provided by Japan to the Iraqi people, as well as discussing a number of regional and international files of common interest.

Saleh stressed, according to the statement, that "there is a joint international and regional responsibility to protect security and stability, defuse crises in the region and reduce their tensions through serious and effective dialogue that takes into account the immediate challenges on the regional and international arenas, foremost of which is the fight against terrorism and extremist ideology, and cooperation in combating administrative and financial corruption." health fields, environmental protection and confronting the climate change crisis.

Al-Kazemi stressed, in a statement to his office, "the importance of the Japanese experience from an Iraqi perspective, and the relentless pursuit to benefit from it," stressing that "the Iraqi arena has become open to Japanese investments in various fields, especially the fields of energy, oil, electricity, and alternative and renewable energies."

He expressed his "appreciation for the role played by Japan on regional issues", praising "the projects financed by Japan, in the areas liberated from terrorist gangs of ISIS through the path of establishing security and sustainable development in them."

And he reiterated his "invitation to Japan to attend, as an observer, in the Baghdad Conference for Cooperation and Partnership, which Iraq will host at the end of this month."

For his part, the Japanese Foreign Minister praised "the Iraqi initiatives, which received a positive response at the regional and international levels, and considered them one of the pillars of consolidating security and stability in the region, and efforts to calm it down."

Meanwhile, Foreign Minister Fouad Hussein reviewed, with his Japanese counterpart, the progress of bilateral relations between the two countries, and ways to advance them to meet the aspirations of the two friendly countries.

Hussein called, in a statement to the Ministry of Foreign Affairs, "the Japanese side to increase the volume of trade exchange between the two countries, hold the meetings of the Iraqi-Japanese Joint Committee, open more prospects for joint cooperation, and urge Japanese companies to invest in Iraq, noting that the Iraqi market is a fertile market, and the product The Japanese are respected by the Iraqi citizen."

Similar topics
» The White Paper for Economic Reform:
» The international community supports the "White paper", Iraqi Minister of Finance says
» Economist: The next government is required to prepare detailed programs to achieve the goals of the White Paper and liberate the economy from dependence
» Finance Minister: The white paper was launched to correct distortions in the Iraqi economy
» Ziad Khalaf: The white paper clearly illustrated the roots of the structural problems in the Iraqi economy