MEE: Nouri al-Maliki is plotting his comeback in the upcoming elections

MEE: Nouri al-Maliki is plotting his comeback in the upcoming elections 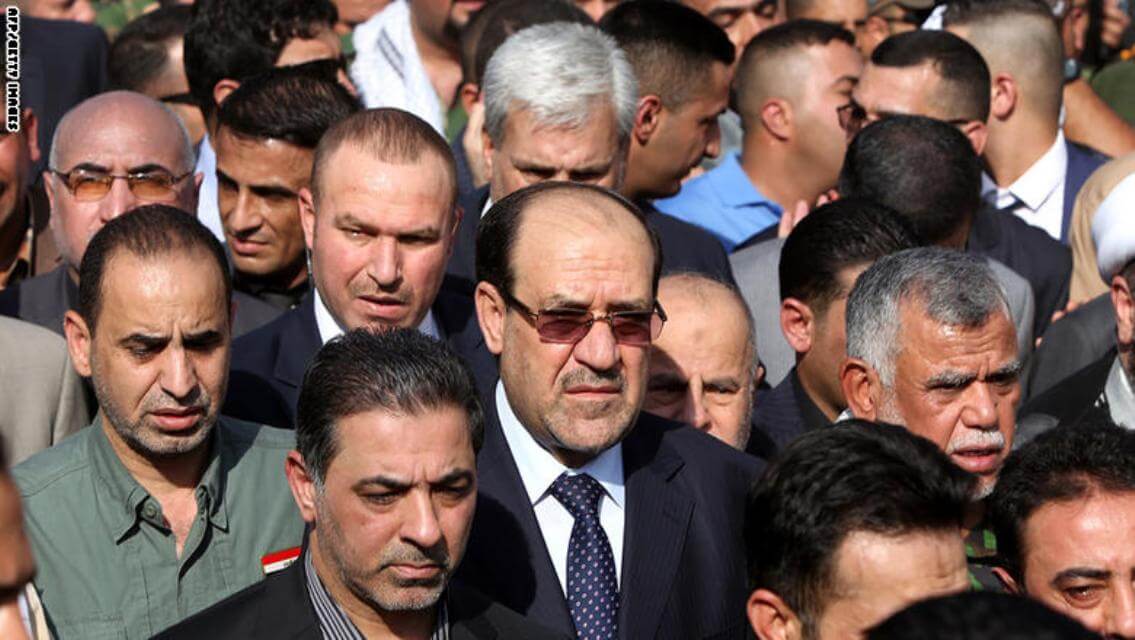 Shafaq News/ Seven years after he left the premiership, Nouri al-Maliki believes the conditions are right for his return, Saudad al-Salhy wrote on the Middle East Eye (MEE).

The former prime minister is still a major force in Shia politics, despite his ignominious exit from office in 2014, when the Islamic State (IS) group had snatched a third of Iraqi territory.

Described as “arrogant” by his detractors and “strong” by his allies, Maliki was near certain to win a third term as prime minister when his State of Law electoral alliance won 92 of 328 seats in 2014’s elections.

The shocking emergence of IS changed all that, and forced him to step down. Since then, Maliki’s political fortunes have suffered as his Shia rival Muqtada al-Sadr’s have risen, with the influential cleric replacing the former prime minister's men with his own in most key state institutions.

Today, however, Shia political forces are divided and Sadr has said his movement will not participate in Iraq’s upcoming October election, urging his followers not to vote. This has revived Maliki’s hopes, politicians and observers told Middle East Eye.

The withdrawal of the Sadrist movement, the largest and most organised of the many Shia forces, is set to redraw the map of political influence, and create new opportunities.

“Maliki plans to gain a new term. He is looking to have a greater voice and influence over the Shia house [the main Shia forces] and he is convinced that he currently has a greater chance and that he is closer to the premiership than ever,” a prominent Shia politician close to Maliki told MEE, speaking on condition of anonymity.

“He will be the biggest beneficiary of the Sadrists' withdrawal from the elections - if Sadr does not change his decision, of course,” he said. “Also, he will gain votes from the upset electorate of the armed factions. He will do well this time compared to the last elections.”

Iraqi parties and politicians have been unusually slow to launch their electoral campaigns this year. But not Maliki.

Under the slogan, "We will restore the state," his State of Law coalition has launched an early electoral campaign seeking to polish Maliki’s image. He’s being re-marketed as the best candidate for prime minister and a strong leader capable of cooling tensions between factions, providing security and basic life services, and combating uncontrolled weaponry.

"Through our communication with people, we found that they do not feel that there is a state and the situation [deteriorated] from bad to worse. Therefore we decided that our slogan should be in line with the requirements of the people,” Hisham al-Rikabi, Maliki's press secretary, told MEE.

Rikabi expressed confidence that State of Law was in a fine position ahead of the polls.

“Mr Maliki said it more than once: if there is a public desire [demanding] his return as a prime minister, he will return because he is the best option for many of people,” he said. “If the people demand, we are ready to fulfill their demand.”

Iraq was not in a good place when Maliki left office.

The security establishment collapsed in the face of IS’s advance and under the weight of vast financial and administrative corruption.

Nepotism and the marginalisation of Sunnis characterised Maliki’s second term, and when IS captured several major cities and slaughtered thousands, Grand Ayatollah Ali al-Sistani, the head of the Shia community, vetoed his return to the premiership despite receiving the highest number of votes at that time.

And so Maliki agreed to take up the position of vice-president instead. But the loss of the premiership cost him votes and influence, and he won just 26 seats in the 2018 election, two less than Sadr.

The situation has changed since then.

Shia political forces and armed factions associated with Iran have lost many supporters and votes after some of them were involved in the bloody suppression of the October 2019 anti-government demonstrations, as well as their subsequent targeting of activists and journalists.

Conflicts and competition have also emerged within the biggest Iran-backed parliamentary bloc, Fatah.

Kataeb Hezbollah, one of the fiercest and largest armed groups close to Iran, has decided to participate in the elections separately from Fatah. Meanwhile the two largest factions left in Fatah, the Badr Organisation and Asaib Ahl al-Haq, are at loggerheads.

Maliki has two other Shia heavyweight rivals: Ammar al-Hakim and Haider al-Abadi. Yet Sadr supporters and Shia hardliners do not trust them, suspecting them of secularist tendencies, so it’s likely those floating votes will drift over to Maliki.

"The Fatah alliance will be one of the biggest losers in the October elections. Maliki will benefit from the votes it will lose, and he will also reap the fruits of his alliances with a number of the great southern tribes," Ali Taher al-Hamoud, an analyst at the Al-Bayan Center for Studies and Planning, told MEE.

"Practically, his chances have risen to win the elections with a greater number of seats, but not to the level that would qualify him to compete for the premiership."

To become the standout candidate for prime minister, a position that can only be held by a Shia, according to Iraq’s power-sharing agreement, Maliki needs to do more politicking.

Sairoon and Fatah alone hold two-thirds of the Shia electorate in Baghdad and the central and southern provinces.

As things stand, Sadr’s candidates are not running, while Hakim and Abadi have joined forces on the State Forces Alliance bloc. Fayyad and the leaders of the Fadhila Party have opted to run in the elections individually.

By withdrawing and encouraging their supporters to boycott the elections, the Sadrists will drag down voter turnout. But it will also swing open the door for State of Law and Fatah candidates to expand their campaigns and target regions, groups and tribes that they did not dare to approach previously for fear of colliding with the Sadrists.

However, on their own, Maliki's coalition and Fatah will not be able to obtain enough seats to form the largest parliamentary bloc, which has the right to nominate the prime minister and form the next government. Without the backing of Fatah, Maliki will not be able to reach his goal, politicians and political analysts told MEE.

“Maliki is betting on the support of the [armed] resistance factions and the Shia forces close to them,” a prominent Hashd al-Shaabi commander close to Iran told MEE.

"The [armed] resistance factions have no problem with Maliki. On the contrary, they consider him to be a benefactor and one of their biggest sponsors, especially during his second term as prime minister.”

According to the commander, armed factions are not yet clearly labelling Maliki as the man they want as prime minister, but see him as an important ally after the elections, whatever happens.

"The faction leaders have no problem with him nominating himself as prime minister again, as they consider him the qualitative anti-Sadr and the only one capable of reining in the Sadrists,” he added.

"Also, he is accepted by the Americans and the Iranians, and he can create a balance between the two."

Since top Iranian general Qassem Soleimani was killed in a US drone strike on Baghdad airport in January 2020, the role of Iran’s Revolutionary Guard in Iraq has retreated, with Tehran’s intelligence services becoming more prominent instead.

Unlike the Revolutionary Guard, the intelligence services have sought to reduce Iranian interference in the Iraqi political and security scene, and limited the role of the Iran-backed armed forces, to their chagrin.

Yet the armed factions’ Shia rivals fear those policies will soon be reversed.

Shia politicans told MEE they believe the new government of hardline Iranian President Ebrahim Raisi will hand Iraq back to the Revolutionary Guard and restore the primacy of the armed factions.

Maliki, it is thought, has the stature to contain the armed factions’ influence if they are emboldened by Raisi.

"There is an urgent need to find buffers to protect the Shia-led political system in Iraq," one Shia leader said.

"If Iran thinks of returning the Iraqi file to the Revolutionary Guard to compensate for its loss in Syria in favour of Russia and its possible loss in Lebanon, then confrontation with the [armed] factions will inevitably come and a buffer must be found to receive blows."

Current Prime Minister Mustafa al-Kadhimi’s term has become characterised by his attempts to roll back the Iran-backed armed factions’ hold on Iraq. His successor, the Shia leader said, will have to do the same, “either by confronting them militarily or by containing them”.

“Since armed confrontation is very difficult and an option that is not up for discussion by the Shia forces, containing them is the number one option and Maliki is the only one who is able to contain them,” he said.

"The faction leaders and the Iranians are fully aware of this shift, and they know that a very limited number of Iraqi leaders are still accepted and respected by these factions. Maliki is one of these leaders.”

Similar topics
» Al-Nouri to "Tigris": The ambition of the state of law is the premiership, and our candidate is al-Maliki
» Nouri al-Maliki committed constitutional breaches after the elections
» Nouri al-Maliki promises Iraq of civil war if he loses elections
» The Sadrists are preparing for the upcoming elections and so Maliki will face
» Al-Maliki al-Alwani, will be released in order to participate in the upcoming elections