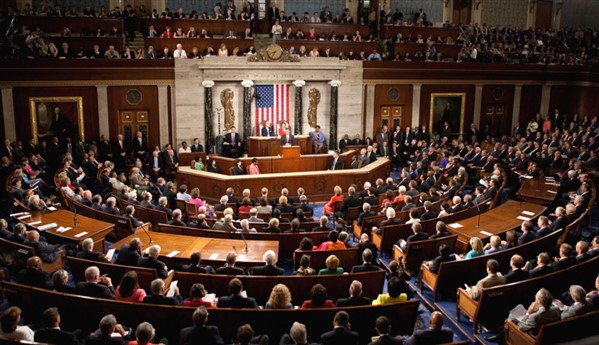 Shafaq News/ The Senate Foreign Relations Committee on Wednesday voted to repeal a pair of war authorizations related to Iraq, the latest move in Congress aimed at reining in presidential war powers.

The panel voted 14-8 on a bill from Sens. Tim Kaine (D-Va.) and Todd Young (R-Ind.) that would repeal the 2002 authorization for the use of military force (AUMF) that greenlighted the Iraq War. The bill would also repeal the 1991 AUMF that approved the Gulf War.

In addition to Young, GOP Sens. Rand Paul (Ky.) and Rob Portman (Ohio) voted with Democrats to support the bill.

“The two AUMFs supporting military action to counter the malignant activities of an Iraq governed by Saddam Hussein were rendered unnecessary more than a decade ago when he was toppled and executed and a new government of Iraq was constituted,” Kaine said Wednesday.

Momentum has been building to repeal the decades-old war authorizations since President Biden launched airstrikes on Iran-backed militias in Iraq and Syria in February and June. Biden cited his authorities under Article II of the Constitution, not an AUMF, to carry out the strikes, but the action still spurred congressional efforts to rein in existing war authorizations.

Senate Majority Leader Charles Schumer (D-N.Y.) reiterated Wednesday he plans to bring a repeal of the 2002 AUMF to the Senate floor for a vote later this year.

In June, the House voted to repeal the 2002 and 1991 AUMFs, as well as a 1957 resolution that provided broad authorization for military action in the Middle East to protect against “armed aggression from any country controlled by international communism.”

The Senate Foreign Relations Committee’s action Wednesday comes a day after it held a hearing with Deputy Secretary of State Wendy Sherman and the top lawyers at the State Department and Pentagon in which they affirmed the administration’s support for repealing the 2002 measure.

“The Biden-Harris administration believes the 2002 authorization for the use of military force against Iraq has outlived its usefulness and should be repealed,” Sherman told senators.

“For the State Department, repealing the 2002 AUMF would not affect our diplomatic initiatives, and the administration has made clear that we have no ongoing military activities that rely solely on the 2002 AUMF,” she added.

The main authority cited in U.S. counterterrorism operations is the 2001 AUMF passed after the 9/11 attacks. Biden administration officials also argue they have sufficient authority under Article II to respond to any threats against U.S. personnel and interests.

Still, most Republicans have argued that repealing the 2002 AUMF could hamstring U.S. counterterrorism missions and embolden the Iran-backed militias that have been targeting U.S. forces in Iraq.

At Wednesday’s meeting, the top Republican on the Foreign Relations Committee, Sen. Jim Risch (Idaho), acknowledged that taking the 2002 AUMF off the books would not stop a president from taking military action, but argued repealing it would be bad “messaging.”

“I’ll be the first to concede that whether 2002 exists or doesn’t exist, gets repealed or not get repealed, it will have zero effect on the decision by a chief executive, whether it’s this one or another one, to take action that the chief executive thinks needs to be taken,” Risch said. “I frankly come down on this that there’s just no reason to repeal it at this time that in any way endangers sending a message that we are committed to the region and committed to protecting our troops and American interests.”

Cruz’s amendment failed 9-13 and Hagerty’s failed 7-15, with Democrats arguing they would have been a back door authorization for military action against Iran.

Those who support the decision to repeal the 2002 and 1991 measures are hopeful it will be a first step in a broader effort to reform war powers, particularly replacing the 2001 AUMF with a narrower authorization.

But past efforts to replace the 2002 AUMF have been stymied by partisan disagreements and clashes between the legislative and executive branches over whether to include limits on the types of forces that can be used, the countries and terrorist groups that are covered and how long the authorization lasts.

On Wednesday, Sen. Ben Cardin (D-Md.) expressed concern about similar fights ahead, saying he expects the State and Defense departments to seek a “blank check.”

“I do believe the Biden administration is sincere in working with us on a realistic authorization, and I have confidence that President Biden understands what he needs in order to keep America safe in regards to our fight against the terrorist groups in the Middle East,” Cardin said. “I think we’re going to have an extremely difficult time with the lawyers at Defense and State as we look to replace the 2001 authorization.”