Barham Salih condemns the Sadr City attack..al-Kaabi warns of the timing and location

Barham Salih condemns the Sadr City attack..al-Kaabi warns of the timing and location 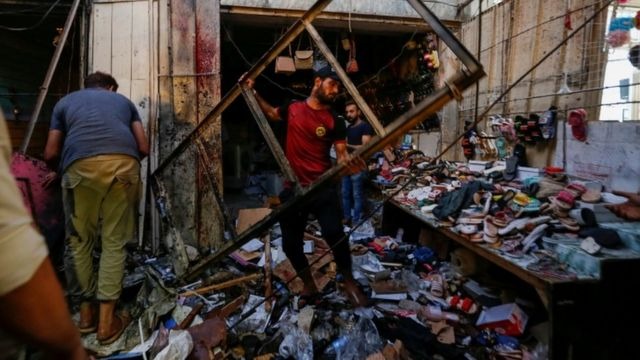 Shafaq News/ Iraq's President Barham Saleh condemned the attack on the Sadr City in the east of the country's capital city, Baghdad, and the Deputy Speaker of the Parliament, Hasan al-Kaabi, urges the civilians and security forces to pursue caution.

Saleh tweeted, "In a heinous crime and unmatched atrocity, they target our civilian people in the Sadr city at the eve of the Eid. They are not willing to allow the people to enjoy a moment of security and joy."

"We will not rest until we uproot the malevolent coward terrorism. Undoubtedly, the Iraqi will defies their delinquency and pettiness."

He said, "We must be careful and pay heeds to the plots that the terrorist gangs have recently commenced in terms of the timing and location of the attack."

Al-Kaabi addressed the security authorities, "Doesn't the Sadr City deserve a serious Stance to prevent the recurrence of targeting innocents and its markets?"

The death toll from the bomb attack that took place in the east of Baghdad on Monday, has risen to 35, a security source updated, with 57 injured at least.

The attack took place in a busy market of Sadr City, the source said. It happened a day before the Eid al-Adha holiday when the market is crowded with shoppers.

Women and children were among the dead and some shops burned down as a result of the explosion.

There was no immediate claim of responsibility but the armed group ISIS has claimed similar attacks in the area before.

The source said that the attack was executed by a female suicide bomber wearing an explosive vest.

It was the third time this year that a bomb hit a market in the densely populated neighbourhood. In April, at least four people were killed in a car bomb attack in Sadr City. That blast was caused by an explosive device attached to a parked car at the market.

Prime Minister Mustafa al-Kadhimi placed the commander of the federal police regiment responsible for the area of the marketplace under arrest, according to an Iraqi military statement. It also said an investigation was launched.

Once an almost daily occurrence in Baghdad, large bomb attacks have slowed since ISIS was defeated on the battlefield in 2017.

Attacks persist, however. In January, more than 30 people were killed in a twin suicide bombing in a busy commercial area in central Baghdad. It was the deadliest bombing in three years to strike Iraq’s capital.

Similar topics
» Barham Salih: The Diyala attack is a despicable attempt to destabilize the country
» The U.S. embassy in Iraq condemns the bombing of Sadr City and reaffirms its support for the government in the fight against terrorism
» Sadr Alliance warns Abdul Mahdi: We will not give you other timing
» Iraq’s Prime Minister: corruption is a reason of the violent attack on Al-Sadr City
» Islamic State claims huge truck bomb attack in Baghdad's Sadr City