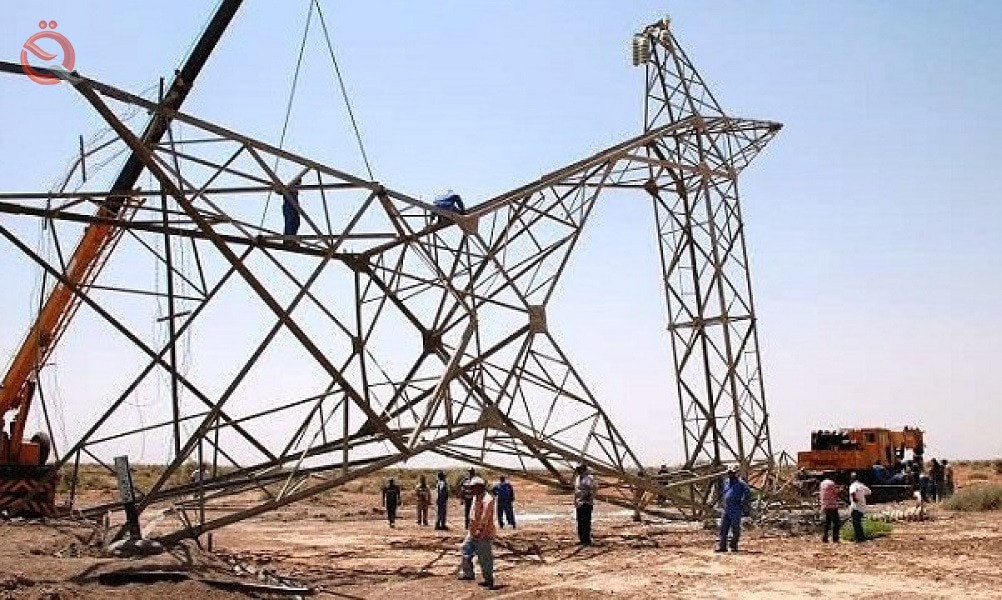 One of the electricity transmission towers in Iraq that was subjected to terrorist sabotage operations. "Internet"

The International Energy Agency, in its commentary on the electric power crisis in Iraq, stated that the electricity sector must include in its plans long-term reforms and solutions in order to reduce the crisis of continuous power generation outages.

The past few days have witnessed power outages that pervaded large areas of Iraq amid rising temperatures that affected millions of Iraqis, including the people of the capital, Baghdad, and the southern cities and governorates. The Ministry of Electricity said that the power stations generated about 4,000 megawatts on Friday, which is less than the generation rates of between 12,000 and 17,000 megawatts. And escalated generation in the middle of the day to 8,000 megawatts.

Ali Al-Saffar, director of the Middle East and North Africa Program at the International Energy Agency, said in an interview with The National news website, "The Iraqi electricity problem requires the development of a short, medium and long-term plan. However, successive governments have tended to the option of short-term reforms. But if We did not want to reach a system of continuous and stable generation of electric power, but this could not be achieved with short-term plans only. The three stages are required and will be logical in solving the crisis one after the other."

Al-Saffar added, "What we are witnessing today is a situation in which the generating station is virtually collapsed, and this becomes clear when the generation rates fluctuate up and down, and in the end the system stops."

Electrical outages can occur when the electricity network is operating at its maximum capacity, or due to failures in the transmission and distribution network. High temperatures can also play a role in these pauses.

Al-Saffar said, "The temperatures are very high, and this can cause problems. On the other hand, Iraq's imports of gas and electric power have shrunk a lot."

After years of war and economic decline, Iraq needs investments in all its industrial sectors, but power generation is particularly sensitive. As power plants in the aging countries generate few hours of electricity per day, these chronic power cuts were a major cause of anti-government protests that began in October 2019.

The international energy official went on to say, "Regardless of what Iraq has invested over the past ten years, there is a growing gap between the rate of supply and the volume of demand, and when there is a gap between the amount of electricity supply and the volume of demand for it, this demand cannot be met, and this is what causes interruptions in power generation." .

Al-Saffar said that there must be a rush to make investments in the fields of energy transmission and distribution, and the maintenance of stations and generators, so that the country can avoid a loss of equipment.

Iraq can generate 20,000 megawatts, but the actual generation capacity, which is affected by technical waste, security and maintenance problems, is estimated to be between 12,000 to 17,000 megawatts during the summer months.

The official in the Energy Agency says that Iraq has the potential to confront this problem. He adds that Iraq is among the most countries in the world that burn associated natural gas. He pointed out that it burns sufficient quantities of gas to meet its energy needs.

However, the problem is not only technical, but also has a security aspect. The country has recently witnessed a wave of sabotage attacks targeting power transmission towers carried out by unknown groups.

Al-Saffar said, "There is a targeting campaign by armed groups to strike the transmission and distribution networks and power stations. It seems that there are systematic attempts to strike the electricity system in this heat, with the aim of angering people." Last Thursday, a 400 kV transmission line between Kirkuk and Qayyarah was sabotaged. And sabotaging another line on the same day in Salah al-Din with a capacity of 132 kV.

Last week, Masdar, the UAE company, said it would develop new solar energy projects in Iraq. And signed an agreement with the Iraqi National Investment Authority to develop photovoltaic projects with a minimum production capacity of 2 gigawatts.

Similar topics
» The International Energy Agency: The solution to the Iraqi electricity crisis lies in the introduction of long-term reforms
» IRAQ STRESSES THE NEED TO REACH AN AGREEMENT THAT WILL ACHIEVE BALANCE AND STABILITY IN GLOBAL MARKETS
» Electricity: the introduction of two thousand MW to the energy distribution system
» International Energy: Electricity consumption is increasing in Iraq .. and solar energy will not contribute significantly
» General Electric announces a plan to transform the energy sector in Iraq and end the electricity crisis