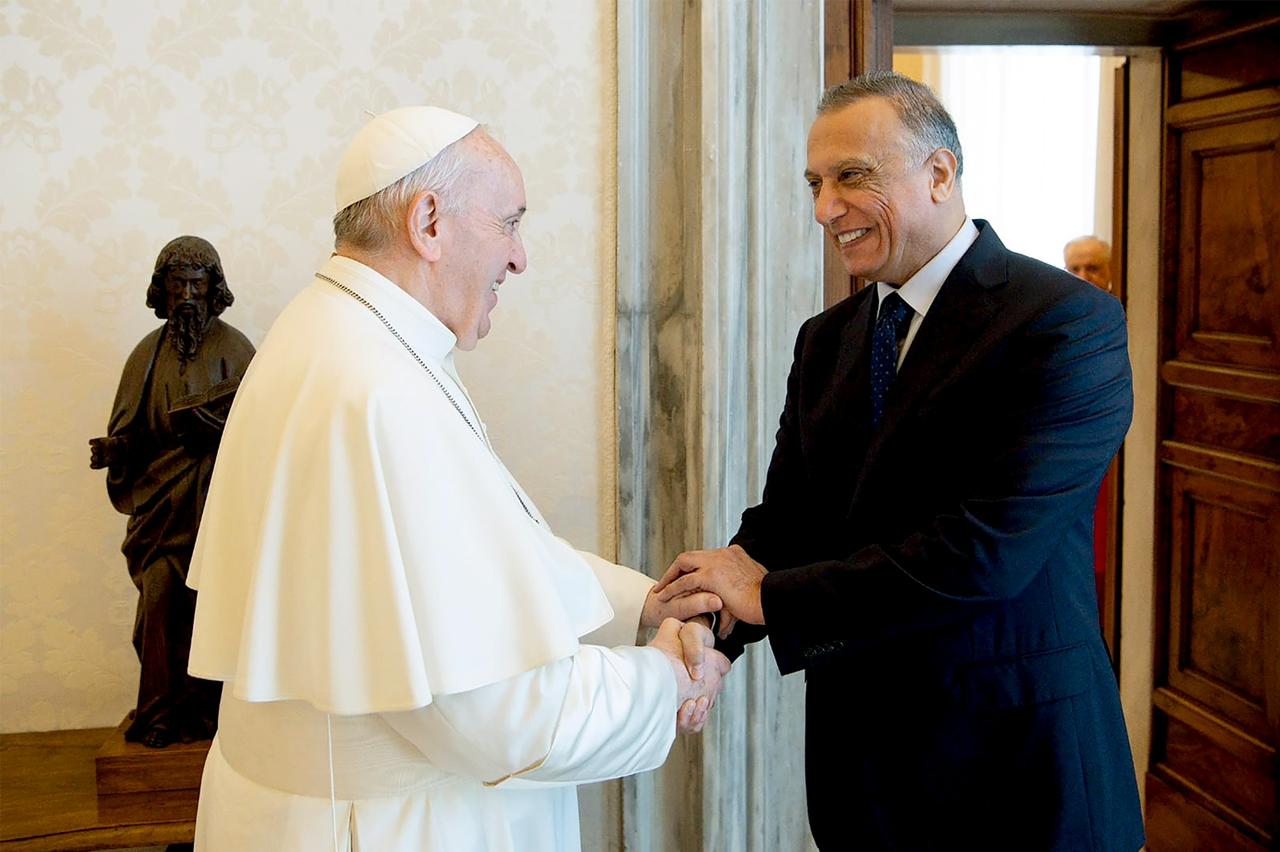 Shafaq News/ The Iraqi Prime Minister Mustafa Al-Kazemi confirmed on Friday that the government is proceeding with the reconstruction of the ancient churches that were destroyed by ISIS, pledging to provide the necessary facilities for the promotion of tourist and religious groups to the ancient city of Ur in Dhi Qar Governorate.
Al-Kazemi's office said in a statement received by Shafaq News Agency, "The latter met in the Vatican His Holiness Pope Francis, Pope of the Vatican, and praised the Pope's historic visit to Iraq, and the messages it contained in support of Iraq, and affirmed the unity of humanity in the aspiration for peace and coexistence and standing against extremism in all its forms ".
Al-Kadhimi affirmed, "The Iraqi government's commitment to work to consolidate Iraqi Christians and other minorities in their lands as an essential part of the fabric of their societies, and to facilitate the return of the displaced and immigrants from them to their areas of origin, as well as to work to urge the Iraqi church authorities to activate their humanitarian activities, especially educational and health, and to provide all the required assistance to them." ".
The Prime Minister said, "The government is proceeding to reconstruct the ancient churches that were destroyed by ISIS terrorist gangs, in addition to the government's serious efforts to reconstruct the city of Ur due to its historical importance, and to be prepared to receive Christian delegations to the city, and between the importance of taking measures and providing the necessary facilities to group tourist and religious groups." to the ancient city of Ur.
For his part, His Holiness Pope Francis I welcomed Al-Kazemi and his accompanying delegation, stressing the importance of strengthening peace efforts in the region, in a way that achieves the prosperity and stability of peoples.
Al-Kazemi also met, according to the statement, the Prime Minister of the Vatican State, Cardinal Pietro Parolin, and during the meeting, they discussed bilateral relations, and the strengthening of cooperation and joint coordination to facilitate the promotion of tourist and religious groups to the historical city of Ur.
Al-Kazemi renewed the call for the Supreme Permanent Dialogue Committee between Iraq and the Vatican to hold its third meeting in Baghdad this year.
https://shafaq.com/ar/%D8%B3%DB%8C%D8%A7%D8%B3%D8%A9/%D8%A7%D9%84%D9%83%D8%A7%D8%B8%D9%85%D9%8A-%D9%8A%D8%A8%D9%84%D8%BA-%D8%A8%D8%A7%D8%A8%D8%A7-%D8%A7%D9%84%D9%81%D8%A7%D8%AA%D9%8A%D9%83%D8%A7%D9%86-%D9%85%D8%B6%D9%8A-%D8%A7%D9%84%D8%B9%D8%B1%D8%A7%D9%82-%D8%A8-%D8%B9%D9%85%D8%A7%D8%B1-%D8%A7%D9%84%D9%83%D9%86%D8%A7-%D8%B3-%D8%A7%D9%84%D9%85%D8%AF%D9%85%D8%B1%D8%A9-%D9%88%D9%8A%D8%AA%D8%B9%D9%87%D8%AF-%D8%A8%D8%AA%D8%B3%D9%87%D9%8A%D9%84%D8%A7%D8%AA

Similar topics
» Iraq starts reconstruction of Mosul’s destroyed churches
» Churches Occupied, Mosques Destroyed, Nuns and Orphans Kidnapped in Iraq
» Video: Rebuilding Mosul – Iran Sanctions “Threaten Progress”
» The Minister of Planning discusses with the (Habitat) in Iraq the mechanisms of treating informal housing and rebuilding the houses destroyed by terrorism
» Abdul-Mahdi: I will lift the parliament request for my resignation