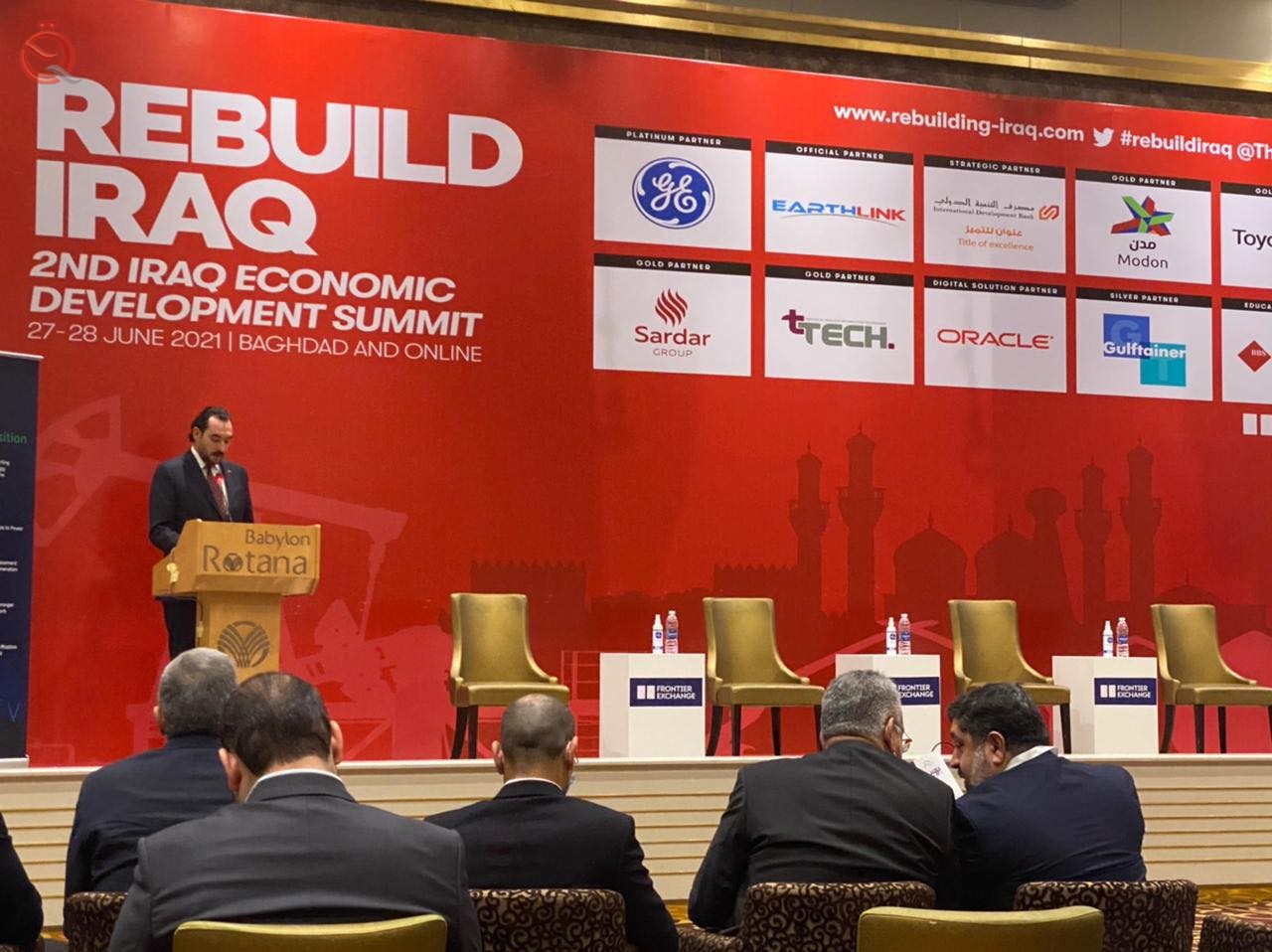 The Chairman of the Board of Directors of the International Development Bank, Ziad Khalaf, said that the white paper identified with unprecedented clarity the roots of the structural problems in the Iraqi economy, and recognized that the most important of these problems is to expand the role of the state in managing the Iraqi economy.
Khalaf added in a speech on the sidelines of his participation in the Iraq Reconstruction Conference, organized by the International "Frontier Exchange" Foundation, that "the issue of the reconstruction of Iraq started planning immediately after the end of the war, as the first preparatory meeting was held in New York, during which the United Nations, the World Bank and the International Monetary Fund determined On the Iraqi side, the main sectors concerned with reconstruction, including education, health, transportation, and electricity.
He explained that the white paper, in its first and second parts, is part of the comprehensive and final economic reform supported by the International Contact Group for Iraq (  IECG),  which includes the G7 , the European Union, the World Bank and the International Monetary Fund.
Khalaf pointed out that "this international group will have a direct role in the institutional governance of this white paper and the implementation of its 64 strategic projects."
He added: "According to estimates issued by the joint report of the World Bank, the United Nations and a number of independent Iraqi experts, Iraq needs between 88 and 100 billion dollars to implement reconstruction projects, and in our opinion, representatives of part of the national economy, whatever the cost we are able to bear, because we have enormous potential. Of financial, material and human resources, but we failed to invest or exploit these capabilities properly. We believe that Iraq is capable of financing development if there is a conscious management of the economy."
He stressed that "the responsibility for rebuilding the state is the responsibility of both the public and private sectors, and I am interested here to address the banking aspect and its role in the reconstruction process of Iraq, as you know, the Iraqi banking sector always constitutes one of the main levers to support the Iraqi economy, and I address here a special greeting to the Central Bank. Al-Iraqi to His Excellency Governor Mustafa Ghaleb, and to all the Iraqi banking leaders, who efficiently faced local challenges, and contributed to strengthening and supporting the national economy and sustainable development.
He added, "Let me refer to the International Development Bank, which had an active and positive contribution to the process of rebuilding Iraq by financing a wide range of mega projects in various economic sectors, as the volume of cash and non-cash credit financing provided by the Iraqi public and private banking sector for major projects." And companies and to the housing sector and small and medium-sized companies exceeded 30 billion dollars, of which the share of private banks was about 28%, and we in the International Development Bank had an active role in these financing operations, playing a prominent role in launching the principles of financial inclusion to achieve one of the goals of sustainable development and work transforming Iraq into a country less dependent on cash and switching to electronic payment operations, which contributed to raising the efficiency of the banking sector’s performance, and achieving optimal monetary policy in Iraq.”
He stressed that "our sponsorship of this conference confirms our interest in the reconstruction process of Iraq and a sense of our national responsibility and duty in this context, as we were keen to continue investing in human capital and infrastructure, applying the best available banking industry techniques, and providing the latest electronic banking services to individuals and companies with high quality." And broadly, our interest was not only limited to the banking side, but we had a broad strategic vision for the future, as we worked on establishing a group of different institutions such as insurance, contracting, industry, investment, real estate development and information technology.
He continued, "As a matter of national responsibility, I go to all distinguished Iraqi businessmen at home and abroad to participate in the development of the private sector to enable it to assume an important role in the responsibility of reconstruction and to play a greater role in the economic arena and to supply the necessary supplies for everything the country needs, to reflect the real potential in Iraqi society." Attracting national immigrant capabilities to rebuild the country.

Re: Ziad Khalaf: The white paper clearly illustrated the roots of the structural problems in the Iraqi economy

[size=104]WELCOME TO
REBUILD IRAQ[/size]
Held following the outstanding success of the “Iraq: A Leap Forward" conference in December 2018, this year Rebuild Iraq returns under the official patronage of the Government of Iraq, the National Investment Commission, and the Office of H.E. the Prime Minister of the Republic of Iraq.
Rebuild Iraq supports Iraqi Ministries in unveiling strategically important tender and project opportunities, providing a platform for multinational companies to access key decisionmakers from the government, and secure business opportunities. This year Rebuild Iraq is being held in a hybrid format, physically in Baghdad, as well as virtually online. We have all the bases covered, so join us in March and do not miss out on Rebuilding Iraq!

Iraq has come through a difficult few years and has reclaimed its land and driven out Daesh from its borders. The country is ready to prosper and develop its economy, beginning with the rebuilding and reconstructing of its major cities. The Iraqi Government have successfully received over $30bn in foreign aid and investment, with a further $70bn required in the coming years. The international community has committed investment towards Iraq, highlighting the international investor confidence in the country.

Iraq’s economy is expected to grow rapidly over the coming years, an untapped opportunity with enormous potential. Rebuild Iraq will focus on the key industries propelling Iraq’s reconstruction efforts. With extensive opportunities for investment in infrastructure, construction, agriculture, healthcare, tourism and many others, now is the time to invest in Iraq. 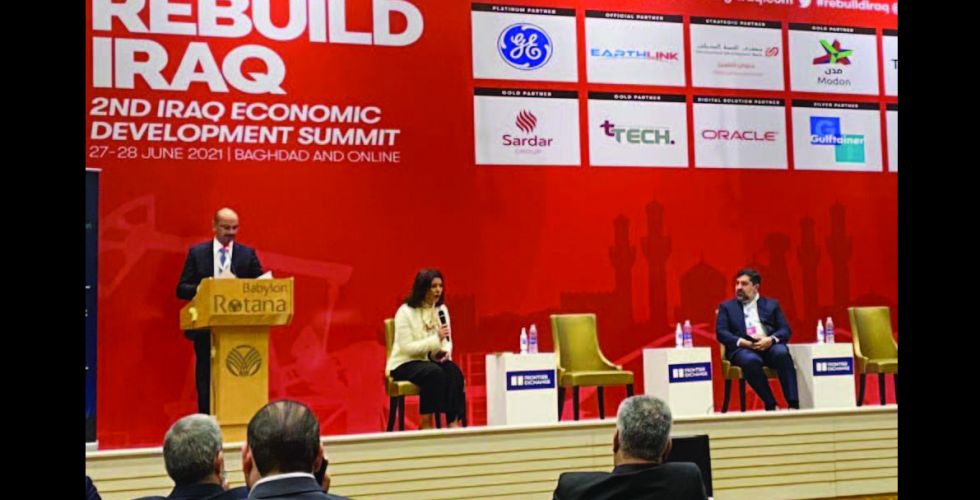 
Deputy Prime Minister and Minister of Finance Dr. Ali Abdul-Amir Allawi said: {Iraq is dealing seriously with issues that have hindered and distorted the economy,' pointing out that "the Prime Minister and his reform team took a bold decision to implement a reform agenda, and any reform must have great political support." and recognition of its necessity, and there was support from political leaders and important parliamentary groups for reforming the state's economic policy.

He pointed out that {the decision to devalue the currency is necessary to improve competitiveness within the Iraqi economy and improve public finances, and a number of necessary infrastructure projects that have suffered interruption for years have been completed, and we have also worked on reforming the banking system, and establishing an anti-corruption squad.

He stressed that {the white paper is the most important achievement of the government and a serious plan to reform the economy, as it calls for the issuance of more than 600 changes in laws aimed at reforming the economy}.

The head of the National Investment Commission, Suha Al-Najjar, confirmed that "investment is an absolute necessity to develop the reality of the national economy and move it to a better stage, and that the commission is supportive of investment efforts that wish to enter the Iraqi labor market.

The speech of the Minister of Higher Education and Scientific Research was read out by Dr. Yassin Al-Ithawi, in which he emphasized “the ministry’s continued investment in human capital,” pointing to “the establishment of training units that will be transformed into specialized centers, aimed at developing students and putting them in the labor market after rehabilitating them.” ", pointing to a breakthrough in the reality of e-learning during a record period, despite the lack of infrastructure in the country."

Member of the Board of Directors of the Union of Arab Banks Ziad Khalaf said: {The issue of the reconstruction of Iraq began immediately after the end of the war, as the first preparatory meeting was held in New York, during which the United Nations, the World Bank, the International Monetary Fund and the Iraqi side identified the main sectors involved in reconstruction, including education. And health, transportation, transportation and electricity, as well as many other international conferences, which were devoted to the reconstruction and held in Japan, China, Spain, Belgium, Egypt, Kuwait and other Arab countries, up to the white paper that was officially supported by {the International Contact Group for Iraq IECG. Which includes the seven 7G countries, the European Union, the World Bank and the IMF
international }.

He said: {As a matter of national responsibility, I appeal to all distinguished Iraqi businessmen at home and abroad to participate in the development of the private sector to enable it to assume an important role in the responsibility of reconstruction and to play a greater role in the economic arena and to supply the necessary supplies for everything the country needs, to reflect the real capacity inherent in Iraqi society and attracting national immigrant capabilities to rebuild the country.

As for the Deputy Governor of the Central Bank, Ihsan Al-Shamran, stressed that rebuilding Iraq requires the ability to build and follow it, and to achieve the goals seriously.

He referred to the initiatives of the Central Bank and the support it provides to small and medium enterprises in addition to the housing sector, especially vertical housing with comfortable installments, and the Central Bank is also working to enhance the role of women in economic life.

He pointed out that "the evaluation oversight on the banking system to be an actual supporter of the development process and assigning it with possible financing."

Communications specialist Alaa Jassem said: "The world has become closely linked to the Internet, which requires us to provide advanced services in the country," noting that "the coming period will witness the launch of an initiative (Education in Iraq), and this supports electronic universities."

Similar topics
» Does the "white paper" stop the collapse of the Iraqi economy?
» The international community supports the "White paper", Iraqi Minister of Finance says
» The White Paper: When Structural Adjustment Comes to Iraq
» Ziad Khalaf: The Iraqi Summit For Digital Transformation Is A Gateway To The Country's Development
» Finance Minister: The white paper was launched to correct distortions in the Iraqi economy