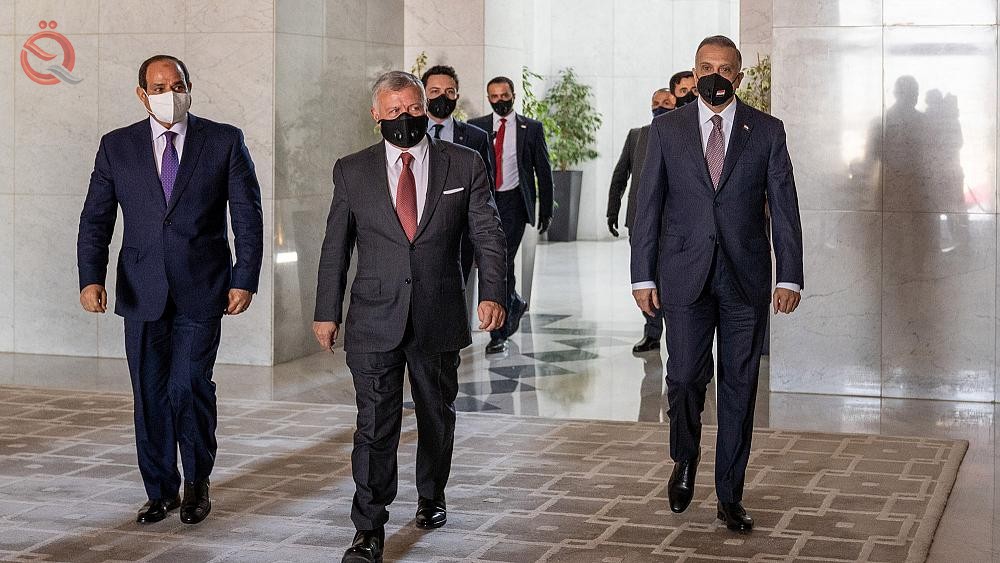 
Today, Sunday, the capital, Baghdad, is preparing to host the tripartite summit between Prime Minister Mustafa Al-Kazemi, Jordanian King Abdullah II, and Egyptian President Abdel Fattah El-Sisi, as a continuation of the previous two summits in Cairo, Egypt, and the Dead Sea in Jordan.

The official "Al-Sabah" newspaper quoted sources as saying: "The tripartite summit will discuss very important economic and political files, in addition to activating all agreements signed between the three countries during the past periods in Egypt and Jordan in the economic, investment, energy, oil and electricity fields."

The spokesman for the Ministry of Planning, Abdul-Zahra Al-Hindawi, said, according to the newspaper, that "the tripartite summit is of great importance not only to Iraq, but also to Jordan and Egypt."

He pointed out that "the Minister of Planning, Khaled Battal Al-Najm, will represent the head of the Iraqi-Jordanian-Egyptian Coordination Council on the Iraqi side."

He added that "there is anticipation from other countries awaiting the results of the tripartite summit, and desires from countries to join the Iraqi-Egyptian-Jordanian cooperation axis."

He stressed that "many files will be on the summit table, including economic files, and we have the file of the tripartite electrical connection between Iraq, Jordan and Egypt, which is of great importance for energy in Iraq, to ​​contribute to filling the shortage in this field."

And with regard to transportation, there is a project for the existence of a land transport line between Iraq, Jordan and Egypt, and companies that will be announced at a later time, which will undertake the land transport process at reduced wages for citizens of the three countries.

He pointed out that "the summit will discuss the file of agricultural cooperation between countries and the file of rehabilitating Iraqi factories by Egyptian companies, in which a decision and a specific procedure will be taken."

He pointed out that "the file of the oil pipeline, which extends from Basra to the port of Aqaba in Jordan, will also be present at the table of the three leaders."

Al-Hindawi explained that "other files are related to completing the requirements for establishing the economic zone between Iraq and Jordan on the common borders between the two countries."

He continued, "The commercial aspects and the increase in the volume of trade exchange, commercial cooperation and files related to housing and benefiting from the Egyptian experience in the field of housing and building residential complexes."

According to the newspaper, Prime Minister Mustafa Al-Kazemi said during his visit to Washington that he "intends to enter into a strategic project bearing the name of the new Levant", as he explained that it is an economic project on the European style that brings Baghdad to Cairo, and Amman joined it later. The project is not limited to these three countries, but rather a candidate for the inclusion of other Arab countries.

And "The New Levant", according to strategic experts, depends on the enormous oil wealth owned by Iraq, in exchange for the huge human mass of Egypt, and Jordan joins them due to its geographical location that links Iraq with Egypt, according to the newspaper.

The newspaper pointed out that “experts confirm that the idea of ​​the new Sham project was established on the sidelines of several huge economic projects, foremost of which is the revitalization of an oil line from Basra that reaches the Egyptian Sinai, through Jordanian territory, and as a result of this line, Egypt and Jordan get discounts of up to 16 dollars. On the barrel, while Iraq imports electricity from Egypt and Jordan, in addition to Baghdad attracting investments from the two countries, cooperation in the field of small and medium enterprises, support for innovation and entrepreneurship, cooperation in the health and infrastructure sectors, as well as trade exchange.