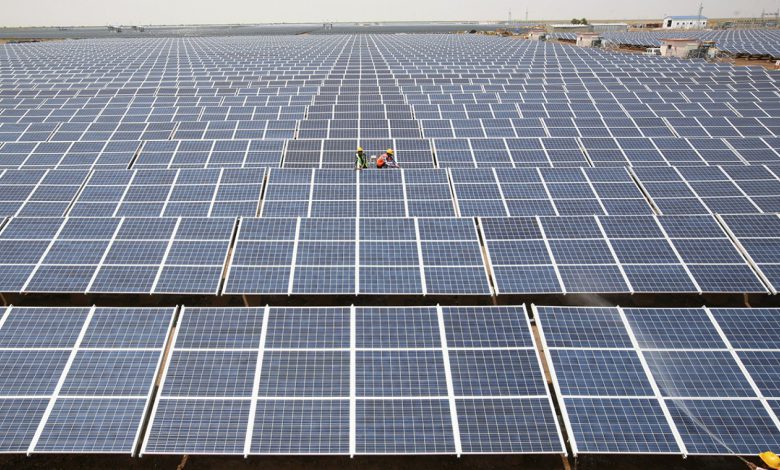 Shafaq News / The Chairman of the Ministerial Council for Energy, Minister of Oil, Ihsan Abdul-Jabbar, announced on Thursday the signing of the largest contract for the production of clean energy, while confirming the progress of the government's plans aimed at increasing and strengthening the national production of this energy.

This came during his sponsorship of a signing ceremony between the Ministry of Electricity and the UAE company Masdar, on a contract to generate 2000 megawatts through the establishment of investment projects for solar energy in central and southern Iraq.

Abdul-Jabbar said, according to a statement received by Shafaq News Agency, that "Iraq is implementing a plan to replace clean energy instead of energy produced with fossil fuels at a rate of (20-25) percent of the energy produced, which is equivalent to (10-12) kilowatts."

He added, "Signing with the UAE's Masdar Company, which is one of the discreet specialized international companies, is an important step for developing the clean energy investment sector and exploiting solar energy in Iraq."

For his part, the UAE Minister of Energy and Infrastructure, Suhail Al Mazrouei, praised, via the television circuit, the "distinguished relations between the two brotherly countries."

Al Mazrouei affirmed his government's support for bilateral cooperation projects in the clean energy generation sector, and that Masdar Company will harness all its technical and engineering capabilities to implement these projects.

In turn, the head of the National Investment Commission, Suha Al-Najjar, stressed, according to a statement by the Iraqi Oil Ministry, "the importance of the investment contract for clean energy generation with the UAE company Masdar, which achieves the government's goals in obtaining clean energy at a lower cost, as well as adopting clean environment, health and safety standards."

Al-Najjar revealed "the government's plans to sign more contracts that contribute to the enhancement of generating capacity, and to cover the local need."

According to the statement, the signing ceremony was attended by Minister of Electricity Majid Mahdi.

Similar topics
» Iraq signs the "largest" contract to produce clean energy النظيف
» Al-Kazemi calls on Siemens to expand its work to produce clean energy to generate electricity
» Electricity: Our equipment will be 20,000 MW in the summer
»  Oil Minister: 30% of Iraq's energy capacity will be "clean" by 2027
» Taiwanese company signs contract with Iraq to replace oil from Iran