The Human Rights Council is an inter-governmental body within the United Nations system made up of 47 States responsible for the promotion and protection of all human rights around the globe.
It has the ability to discuss all thematic human rights issues and situations that require its attention throughout the year. It meets at the UN Office at Geneva.

Sessions
​
The Human Rights Council holds no fewer than three regular sessions a year, for a total of at least ten weeks. They take place in March (four weeks), June (three weeks) and September (three weeks).
If one third of the Member States requests so, the Human Rights Council can decide at any time to hold a special session to address human rights violations and emergencies.

Foreign Minister: Iraq is keen to be part of the regional and international movement aimed at reducing international humanitarian crises and promoting human rights.

[size=34]Foreign Minister: Iraq is keen to be part of the regional and international movement aimed at reducing international humanitarian crises and promoting human rights.[/size] 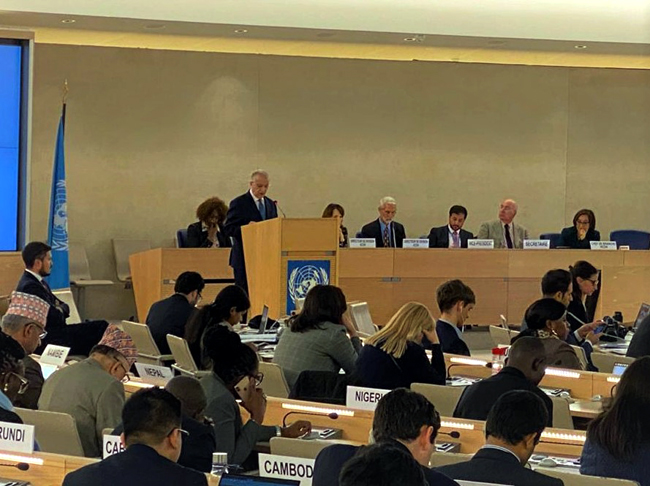 Foreign Minister Muhammad Ali al-Hakim confirmed that the government dealt with the demonstrations that Iraq witnessed as having real demands, so it took a package of quick measures to meet these demands, and formed sub-committees in the governorates to determine their needs, and opened direct channels of dialogue with them.
Conscious of our national institutions, the danger of this crisis has begun with the launch of a number of national initiatives and projects, including the following: The National Project for Youth Employment, explaining: This project aims to establish long-term policies to activate the private sector to revitalize various economic sectors.
Regarding the violations that took place in the demonstrations, the minister explained: The government immediately set up a national committee to investigate all of this.
With regard to women's rights, empowerment and equality, the Minister affirmed: Iraq believes that empowering women and achieving gender equality forms an important basis for peace, prosperity, and community security, and hence sustainable development.
This came in a speech delivered by Foreign Minister Muhammad Ali al-Hakim in the high-level segment / 43rd session of the Human Rights Council.
The Minister expressed Iraq's position regarding a number of regional and international events, including his affirmation of Iraq’s endeavor to facilitate the return of Syrian refugees to their country.
Pointing to his concern about the military operations taking place in Syria, it usually hinders the efforts of the return of refugees and increases the human suffering of the Syrian people.
With regard to Palestinian affairs, the Minister welcomed the report issued by the High Commissioner, according to which a list of companies operating in illegal settlements established by the occupying authorities on the Palestinian territories was drawn up.
Reaffirming the position of Iraq in support of the Palestinian cause in a way that guarantees the Palestinian people the right to a decent life, the restoration of their lands, the return of refugees and the establishment of their independent state with Jerusalem as its capital.
The Minister concluded his speech by saying: Iraq was keen to be an active member of the Council during its membership, and he is grateful for the cooperation and support he received from the Council, and from all international organizations and agencies that help us in our efforts to raise the level of human rights for all Iraqis, and we look forward to further cooperation With you in the future. 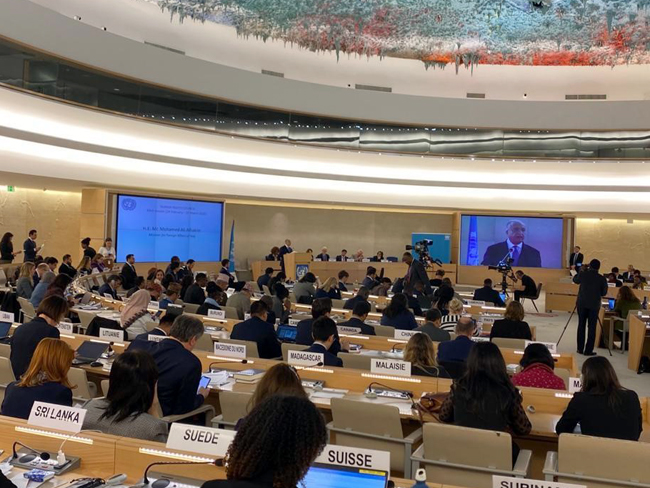 He affirmed that it contradicts a legal text on the representation of women .. In the document: Al-Kaabi calls on the Human Rights Commission to explain the legal basis for the replacement of Mr. “Anas Akram” to replace Mrs. “Wahda Mahmoud”

[size=32]He affirmed that it contradicts a legal text on the representation of women .. In the document: Al-Kaabi calls on the Human Rights Commission to explain the legal basis for the replacement of Mr. “Anas Akram” to replace Mrs. “Wahda Mahmoud”[/size]

Mr. Hassan Karim Al-Kaabi, First Deputy Speaker of the House of Representatives, today, Wednesday, February 26, 2020, the Chairman of the Board of Commissioners of the High Commission for Human Rights to explain the legal basis for the replacement of Mr. “Anas Akram Muhammad Subhi” to replace Mrs. “Unit Mahmoud Fahd Abed” in the membership of the Board of Commissioners although The aforementioned replacement contradicts the provisions of Item (Fourth) of Article (8) of the Commission on Human Rights Law No. (53) for the year 2008, as amended.

He added: This item stipulated that the representation of women in the council be at least one third of the number of its members whose content was confirmed by the Federal Supreme Court Decree No. 42 / Federal / 2012 in 9/9/2012, calling on the Board of Commissioners to provide it with copies UNHCR's annual report for the years 2017-2018-2019, including a general evaluation on human rights in Iraq.

His Excellency said: The representation of women in the Board of Commissioners is essential and legal and should not be exposed to the legally determined percentage for any reason, again his call for women to have a real and fair representation within the decision-making centers in various state institutions.