Saleh and Pompeo are discussing by phone the promotion of peace, avoiding escalation and countering terrorism

Saleh and Pompeo are discussing by phone the promotion of peace, avoiding escalation and countering terrorism

[size=32][rtl]Saleh and Pompeo are discussing by phone the promotion of peace, avoiding escalation and countering terrorism[/rtl][/size]
January 19, 2020 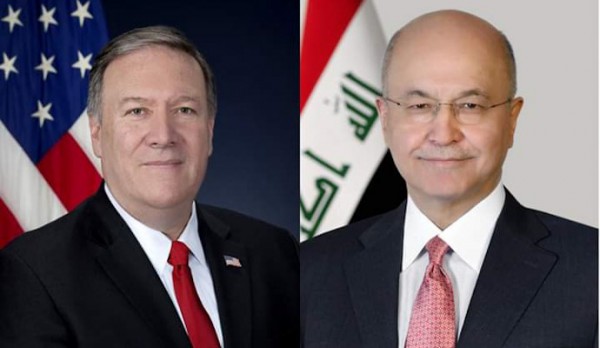 [rtl]Nujaifi: The situation in Iraq is not balanced due to the American-Iranian conflict[/rtl]

[rtl]Saleh and Pompeo are discussing by phone the promotion of peace, avoiding escalation and countering terrorism[/rtl]

[rtl]The President of the Republic, Barham Salih, discussed with US Secretary of State Mike Pompeo the strengthening of the foundations of peace in the region, avoiding the current escalation and not allowing terrorism to return again. A statement received (time) yesterday said that (the two sides discussed the latest security and political developments at the regional and international levels, and affirmed the necessity of protecting Iraqi sovereignty and respecting the independent national decision), noting that (during the call, reference was made to the necessity of self-restraint and reliance on calm and constructive dialogue in Resolving crises and avoiding escalation in a way that strengthens the foundations of peace and stability in the region and the world, as well as cooperation and joint coordination to confront ISIS, not giving terrorists the opportunity to reorganize their remnants and threatening international peace and security). While the American CNN confirmed that President Donald Trump hesitated to withdraw his forces from Iraq.[/rtl]
[rtl]And the agency saw in a report published yesterday that (the departure of more than five thousand American soldiers and other Western forces within the international coalition will allow ISIS to return strongly), stressing that (Trump did not withdraw his forces from Iraq despite his repeated statements to end his country's involvement in external wars and that his withdrawal may not pay With the government of that country to expel its forces in a humiliating manner, and this of course would represent a great victory for Iran. Its forces are there.) But the head of the Iraqi Salvation and Development Front, Osama al-Nujaifi, has indicated that Iraq still needs US forces because the current situation is unbalanced and that terrorism still exists. Al-Nujaifi told the BBC, "Iraq still needs the survival of the American forces because the situation is not balanced and because terrorism is still present." He added, "It is not permissible for the American forces to come out because Iran wants that." Parliament, on the contrary, requested that US forces leave Iraq. The Sunday Telegraph published a report written by Colin Freeman, from Baghdad, in which he says that Iraqis view the American forces in their country as the "lesser of two evils".[/rtl]
[rtl] Colin said during the report that (the official mission of the US forces in Iraq, which has a strength of five thousand soldiers, is to help in the war against ISIS, but Iran pressured the authorities there to push them to expel these forces in response to the assassination of Qassem Soleimani), noting that (the government had passed A non-binding list in Parliament calling for the removal of American forces from the country), and added that (Iraqi officials in their private conversations fear that the withdrawal of the American forces will give Tehran more influence and influence in the affairs of the country), as he put it. [/rtl]
[rtl]The House of Representatives had voted on a resolution obliging the government to work to end the presence of foreign forces in response to recent US violations.[/rtl]