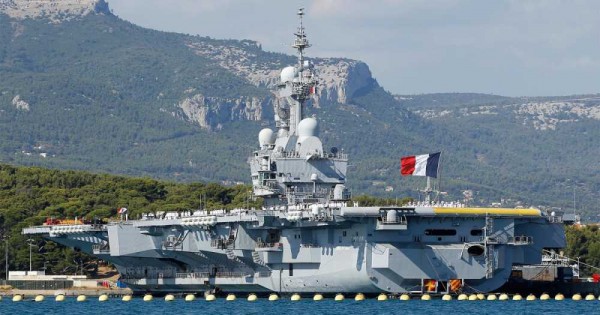 Bressi (France) - (AFP) Paris - Time
French President Emmanuel Macron announced during his congratulations to the military on the occasion of the New Year Thursday, that the aircraft carrier Charles de Gaulle will soon sail to the eastern Mediterranean in support of the international coalition against ISIS.
He said, "The Naval-Air Force will go in support of Operation North (the French part of the International Alliance + Hard Resolve + Operation) from January to April, before deploying in the Atlantic and North Sea."
He stressed that the aircraft carrier "will be at the core of joint operations between several European countries", explaining that "Germany, Belgium, the Netherlands, Spain, Portugal and Greece will participate in keeping up with + Charles de Gaulle + during their operations."
He pointed out that "this European power, as is the case with our deployment in the Baltic countries, will come to strengthen the link between the two sides of the Atlantic Ocean and to strengthen NATO, and this is additional evidence that European defense and NATO are two pillars of one structure."
The French President stressed that “in the Near and Middle East, and despite the transformations taking place in the region, our forces participating in the North operation continue their operations in combating ISIS (...) whose threat remains, in another way, latent and more subtle.”
Macron veiledly criticized countries that withdrew part of their forces from Iraq in early January, against the backdrop of escalating tensions between Tehran and Washington.
He said that "France, since its inception and steadfastness (...) has remained determined and courageous," stressing that "those who fight the terrorist threat, and those who bear it, in this region, know who is present and who is remaining."
Macron was speaking from the "123 Orleans-Bricy" air base, which is one of the most prominent French air bases, and includes 2,200 military and civilian personnel covering a wide range of activities, including air transport and special operations.
What are the   specifications of Charles de Gaulle?
Charles de Gaulle is the operator of the French navy, while the shipbuilding company made it to the order on February 3, 1986
It was placed on April 14, 1989.
Its first buoyancy was on May 7, 1994 while it started service on May 18, 2001
And its first sailing from May 21, 2001 to June 1, 2001
She was called de Gaulle in 1987 and previously called Richelieu and then switched to Charles de Gaulle 1987
Its characteristics:
The port: Toulon
Status: On
Hitting: (wounding) an aircraft carrier
Payload: 42,000 tons (maximum)
Weight: 37085 tons
Height: 261.5 meters
Width: 31.5 meters
Water depth: 8.5
Height: 75
Power: 61000 kw
Propulsion: two X 150 MW pressurized nuclear reactors
Speed: 50 km
Range: unlimited distances for 20 years
Passenger capacity: 1950
Crew: 700
Reinforcement:
Esther missiles
Mistral missiles
Sadral missiles
Silver launchers
20 mm sprinklers
Portable aircraft 28 to 35 aircraft
Dassault Super Atendard
Eurocopter AS532
The third time
E-2 Hook I
Dassault Raval
Dauphin