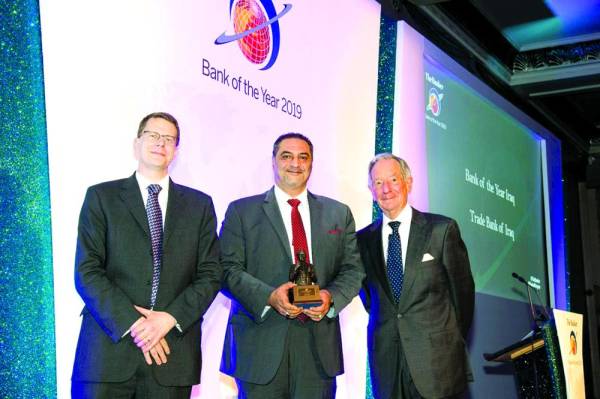 The Iraqi Bank of Trade TBI won three awards for excellence from the famous "The Banker's" magazine, London.

The awards won by the Bank of the Year Award in Iraq, in recognition of his efforts to provide excellent banking services and to develop his commercial offerings significantly.

The bank also won the prize for the best Iraqi bank in the Middle East category in the twentieth annual session of the magazine's awards held in London, as well as the two best offers for trade finance and best banking services (in Iraq), respectively.

The bank’s three awards are a reward for the extensive effort that the bank has made this year. The bank also expanded its presence in the Middle East this year, by opening its first branch in Saudi Arabia last April. The bank also plans to expand its representative office in Abu Dhabi and upgrade it to an asset management company in 2020, and the bank plans to open a representative office in China.

In a new international acclaim for its accomplishments, The
Iraqi Trade Bank wins the Best Bank in Iraq Award from the London Banker

The Iraqi Bank of Trade TBI won three awards for excellence from the famous "The Banker's" magazine in London. The awards won by the Bank of the Year Award in Iraq in recognition of his efforts to provide excellent banking services and develop his commercial offers significantly.


The bank also won the award for the best Iraqi bank in the Middle East category in the twentieth annual session of the Awards "The Banker" for the year 2019 held in London, and also won the same session the two best offers for trade finance and the best banking services (in Iraq), respectively.

The Banker Awards are considered one of the most prestigious awards in the banking sector in the world, and throughout its various sessions, it has been praised and honored by many regional and international banks from all over the world.

The three awards that the Iraqi Bank of Trade obtained are a reward for the intensive effort that the bank has made this year, as well as the bank’s efforts last year to enhance its banking offerings to individuals and reduce its dependence on basic trade finance business, and this has enabled it to offer a series of personal loans and loans Automotive and student loans, as well as credit cards and certificates of deposit for private and business clients.

The bank has also expanded its presence in the Middle East this year, by opening its first branch in the Kingdom of Saudi Arabia last April. The bank also plans to expand its representative office in the UAE capital Abu Dhabi, which had been opened in 2017, and its promotion to an asset management company In 2020, the bank plans to open a representative office in China.


The bank provided a package of the latest banking services and systems, as part of its strategy to increase returns, and also extended its chain of branches and increased its ATMs throughout Iraq, extended working hours and provided facilities for night deposits, which helped it attract new customers.

On this occasion, Faisal Al-Heims, President of the Trade Bank of Iraq and Chairman of the Board of Directors said: "We are very proud to have won these three awards of international weight, and we consider that getting the Bank of the Year Award in Iraq for 2019 and the award for best commercial financing offers, and the best banking services (in Iraq) A remarkable achievement that would not have been achieved had it not been for the efforts made by all employees of the bank that led to positive results. "

About the
"Iraqi Bank for Trade"

The Iraqi Trade Bank was established in 2003 and is considered the first bank in the country, and it accounts for about 80% of commercial financing business in Iraq, and ranks first among Arab banks in terms of cost to income and rank 332 globally In terms of first-class capital. The bank has established 25 branches across Iraq, providing a wide range of banking services to all customers, including companies, individuals, and government institutions. As part of his ongoing endeavors to broaden its customer base and expand into new markets.