- One Day Has Passed 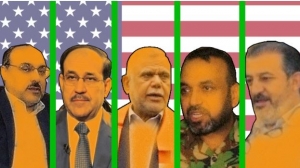 BAGHDAD - The United States plans to take punitive measures against Iraqi figures over their involvement in the use of lethal force to quell mass popular protests that began in early October and continue for the 50th consecutive day, informed sources in Baghdad said.

According to the sources, there are two lists that may be issued by the US Treasury soon, including the names of five Iraqi figures, which will be covered by financial sanctions in accordance with the laws in force in the United States.

The sources pointed out that the new US sanctions, will be extended to three prominent Iraqi figures, closely linked to the Iranian Revolutionary Guard and the Popular Mobilization militias, pointing out that "Abu Jihad al-Hashemi, Director of the Office of Iraqi Prime Minister Adel Abdul Mahdi, put his name at the top of the list of punished figures."

Fog has surrounded the fate of al-Hashemi since the beginning of this month, after the leaked office of Abdul-Mahdi news of his resignation, and the appointment of Qais al-Amiri, close to Faleh al-Fayyad, head of the Popular Mobilization Authority, in his position.

Hashemi is described as the de facto prime minister in Iraq since the formation of Abdul Mahdi's government, which confirms the sources accompanying that he chose the most prominent pillars, while other sources say that “Abu Jihad is the financial coordinator of the activities of the Iranian Revolutionary Guard in Iraq, which includes billions of dollars in the areas of housing, entertainment, tourism and materials Food. ”

The sources confirm that the decision to resign al-Hashemi was a formality, to suggest to the public that it is far from the office of Abdul-Mahdi when the list of sanctions to come out in public.

The second figure, who the sources say will respond to the sanctions list, is Hussein Faleh, known as Abu Zainab al-Lami, the head of the PMU's private security service, and is known as the personal companion inside Iraq of senior Revolutionary Guards general Qasem Soleimani.

The third person under US sanctions is Ahmed al-Asadi, a member of the Fatah bloc and leader of the Jund al-Imam Brigades.

Personalities targeted
Abu Jihad al - Hashemi , Director of the Head of Government Office
Hussein Faleh Security Service chief in the popular crowd ,
Ahmed al - Asadi Soldiers Brigades leader Imam
Nuri al - Maliki , the leader of a coalition of state law ,
Hadi al - Ameri , leader of the Alliance of Conquest
Sources confirm that these figures are directly involved in the coordination of sniper and killed and injured and the arrest and abduction Thousands of demonstrators, activists and journalists across the country have been experiencing protests since the beginning of last month.

The sanctions against al-Maliki and al-Amiri related to corruption and human rights violations, while the sources confirm that the United States is considering putting the name of the head of the Popular Mobilization Commission, Faleh al-Fayyad, on the same list, which includes the leaders of the rule of law and Fatah on similar charges.

Such sanctions would impose complex financial constraints on the movement of funds for persons listed in the Regulations.

US Secretary of State Mike Pompeo said on Monday the administration would not stand idly by "while we see corrupt officials making the Iraqi people suffer."

He stressed that the United States will impose sanctions on corrupt figures who steal the wealth of the Iraqi people.

He added that the protests in Iraq do not distinguish between communities and ethnic groups, but wants to get rid of Iranian interference, pointing out that the United States remains the largest donor of humanitarian aid in Iraq.

But an Iraqi observer played down the seriousness of the leaks and predicted that government sources with limited influence had leaked them, with the aim of spreading terror among Iranian figures, whose presence was heavy on the political system.

The observer told Al-Arab, “It can be said that the protests have strengthened one wing of the last wing of the regime in Iraq, so that the wing dare to declare its desire to exclude the faces that have become subordinate to Iran is a burden on Iran itself. All this means that there is an intention to carry out liquidations within the regime, supervised by Iran in order to delude the protesters that there is a real response to their demands.

"Even if the leaks are real, they may be part of a plan to soak up popular anger and divert it from demanding the fall of the entire sectarian system and turn the page of corruption into attention to the fragments of the already existing conflict between the pre-existing wings of the regime under Iranian auspices."

He ruled that this would affect the protesters and reduce the ceiling of their demands because it is a prosthetic solution, like the ministerial changes, which they refused to consider a solution, stressing that the violence against the demonstrators was not an individual behavior as it was a systematic policy linked to an Iranian defense plan, details of which were illustrated by the recent repression Inside Iranian cities.