Abdul Mahdi has 45 days to make radical repairs or leave

Abdul Mahdi has 45 days to make radical repairs or leave 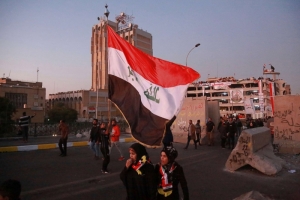 
If the current government fails to implement necessary reforms that would avert further chaos, the political parties vowed at a meeting called by Wisdom Alliance leader Ammar al-Hakim to sack the prime ministers and parliament and go to early parliamentary elections.


The document stressed the agreement between the leaders of the political blocs on the need for a major reshuffle in line with the aspirations of the stage and the demands of the demonstrators and the need to activate the rule of law.


The document also called on the Iraqi Prime Minister to identify the parties behind the killing of demonstrators and the excessive use of force and kidnappings and targeting the media, and disclose it to the public.


For his part, stressed the coalition victory in the Iraqi parliament led by Haider al-Abadi that the signing of the document of the political blocs came conditional on the formation of a new government.


The statement issued by the coalition that "the signing and signing of the victory coalition on the political blocs document on last night came conditional on the formation of a new government to implement these commitments and early elections."


In a related development, US Secretary of State Mike Pompeo said that the United States is ready to impose sanctions on any Iraqi officials found corrupt in addition to those who participated in the killing and injury of peaceful protesters.


Pompeo pointed out that the protests in Iraq want to get rid of Iranian interference. "We will not stand idly by as corrupt officials cause the suffering of Iraqis," Pompeo told reporters at the State Department.


He stressed that "the United States will use our legal authority to impose sanctions on corrupt individuals who steal the wealth of Iraqis and those who kill and injure peaceful protesters."


At least 315 people have been killed since mass protests began in Baghdad and southern Iraq on October 1, the largest since the fall of Saddam Hussein's regime in 2003.


The protests have been triggered by public outrage at a ruling elite they see as enriching themselves at the expense of the state and serving the interests of foreign powers, particularly Iran, at a time when many Iraqis live in abject poverty without jobs, health care or education.


Protesters blocked the entrance to Iraq's main commodity port, while schools and government headquarters were closed in many southern cities in response to calls for a general strike.