Economy News - Baghdad
The Ministry of Finance, on Tuesday, signed a memorandum of understanding with France to advance the construction and the provision of services in Iraq.
The ministry said in a statement seen by "Economy News", "Minister Fouad Hussein discussed with the French ambassador in Baghdad Bruno Hubert the latest developments in the Iraqi arena and the subject of popular protests."
The statement added, "Hussein briefed the ambassador on the vision and plans of the Iraqi government reform in terms of providing employment opportunities and the realization of the principle of social justice among segments of society and sorting and distribution of residential land and serious initiation of anti-corruption measures and administrative and economic reforms."
The statement pointed out that "the French ambassador expressed his country's full support for the reform steps followed by the Iraqi government in order to restore stability and advance construction and provide services to citizens," noting that "a memorandum of understanding was signed between the two sides in this regard." 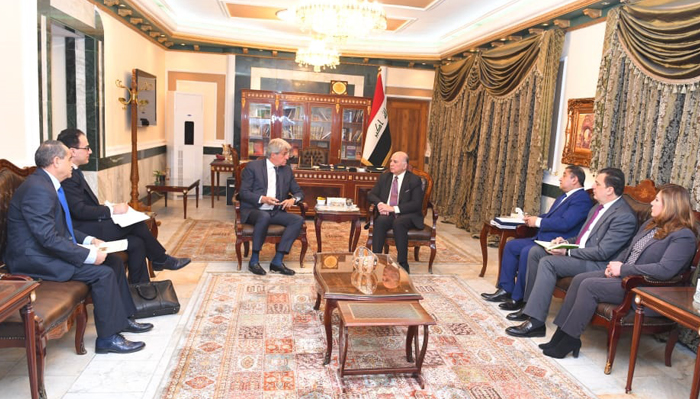 The two sides discussed the latest developments in the Iraqi arena and the subject of popular protests.Mr .
For his part, the French ambassador expressed his country's full support for the reform steps taken by the Iraqi government in order to restore stability and advance the construction and provision of services to citizens .
The meeting was attended by the head of the economic department, Abdelnour Brahmi, commercial attaché Louis Eqlimis, the director general of the public debt department and a number of general directors in the office of the deputy prime minister .