Details of the Presidency and the Judiciary Meeting at the Peace Palace: We reject any security solution to the peaceful demonstration

Details of the Presidency and the Judiciary Meeting at the Peace Palace: We reject any security solution to the peaceful demonstration

[size=35]Details of the Presidency and the Judiciary Meeting at the Peace Palace: We reject any security solution to the peaceful demonstration[/size] 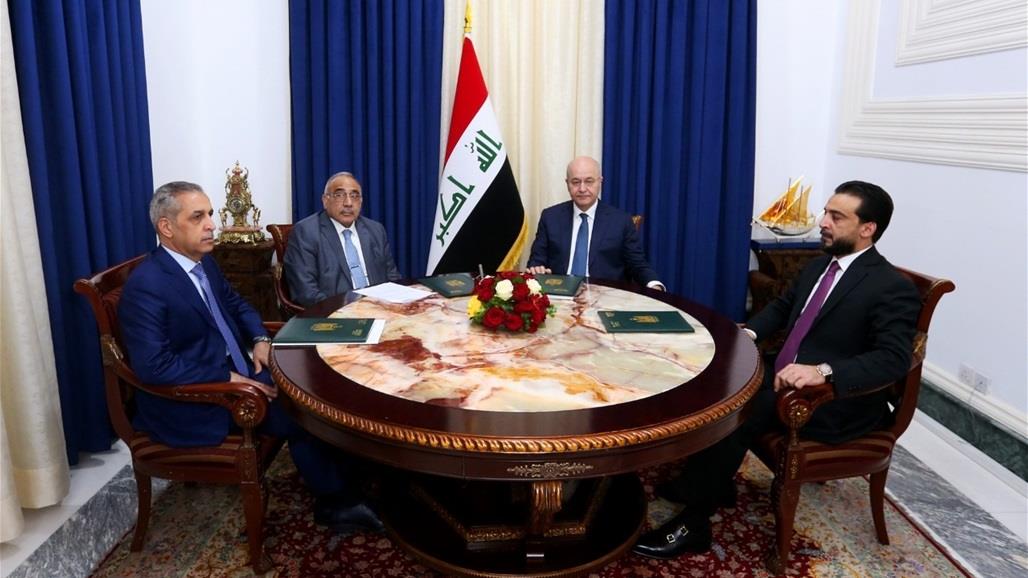 The President of the Republic Barham Saleh hosted a meeting held at the Peace Palace in Baghdad, on Sunday, October 10, 2019, and attended by Prime Minister Adel Abdul Mahdi, Speaker of the House of Representatives Mohammed Halbousi and President of the Supreme Judicial Council, Fayeq Zidan.

At the meeting, according to a statement issued by the Presidency of the Republic, and received a copy of Alsumaria News, "discussed the various political and security developments in the country in the midst of large demonstrations in Baghdad and other provinces, where the meeting stressed that these peaceful popular protests is a legitimate reform movement must In response to national public opinion and the requirements of political and service life, which deserves spare Iraqis after decades of tyranny, war, violence and corruption.


He pointed out that the popular protest raised by the youth of Iraq aspiring to a free and dignified life with a peaceful national will that respects the legal and constitutional contexts and appreciates and safeguards the country's interests is a great protest in the process of rebuilding the state and purifying its institutions and upgrading its construction to what Iraq deserves.

The participants reaffirmed the firm position of refraining from any security solution to peaceful demonstrations, and strict accountability for any confrontation based on excessive violence, referring in this regard to the orders and directives of the Commander-in-Chief of the Armed Forces to prevent the use of live bullets and all forms of violence that depend on cruelty and exaggeration.

The meeting dealt with keen interest cases of abductions against activists by uncontrolled and outlaw groups, as well as crimes of assault on demonstrators, which are directed at investigating and identifying the perpetrators and punishing them, stressing that no one of the demonstrators will be detained.

The assembled parties confirmed, according to the statement, that all persons found guilty of criminal offenses and any party will be brought to justice. Strict justice will prosecute anyone who assaults, abducts or arrests anyone outside the law and the judiciary. Once again the importance of confining arms to the state is confirmed, and this will inevitably be achieved.
In addition, the meeting stressed the need to abide by the peaceful and democratic nature of the demonstrations and to preserve public security and property and prevent the deflection of the demonstrations from their peaceful nature.
The meeting also affirms the most important; respect and sacrifice of the sacrifices, of the martyrs and the wounded of the protagonists of peaceful demonstrations and of the security forces. Their blood that shed illuminated the way and opened the horizon towards the future.

The conferees asserted that no pure drop of blood can go to waste, and that the work of sincere justice does not stop in order to find out who is involved in this clean blood. It is the responsibility of the governmental and legal authorities, all of us, society and governors, to ensure that efforts do not stop unremittingly in apprehending murderers, murderers and bloodshed. Our responsibility is to secure the rights of the families of the martyrs and to ensure that the wounded are treated to the best of their abilities.

The meeting confirms and tells the Iraqi youth: You can only win, and your country and your people win you, we win you as we embark on a vigorous action so that your protests are a vital occasion to embark on a radical reform work that must be successful and with practical results that will combat corruption, the scourge of the greatest devastation after terrorism. Violence, as well as the evaluation of the tracks of the political process at various legislative and executive levels so as to provide authorities and institutions that are truly capable of serving the people and advancing and advancing the country.

According to the statement, how many free young people will overcome the difficulties, and with your will and courageous stand we pass the transformation into a free, healthy and advanced state, a country where the people aspire and dream, and the responsibility of the elected rulers in which to serve the people and ensure to achieve their aspirations, and the precious and precious to do so .. the following:
1. The executive and judicial authorities have already started the legal work in initiating the opening of the investigative files on corruption and the prosecution of the accused in order to achieve justice and restore looted rights. These files will continue to open. No one, whatever his position, position and position, can escape justice. Neither politicization nor favoritism in the opening of files and in investigations and trials. The interest of the country, the rights of the people and the application of the law is the decisive factor in all matters. Continuous.
2. Work has also been initiated to legislate a new electoral law to ensure that this law ensures justice in electoral competition, helps the arrival of qualified candidates under the voters' vision and convictions, and reduces the opportunities for party monopoly to keep the political stagnation between a limited number. The new law also helps to enhance the chances of young people in reaching parliament and contributing to their country's policy making. The new law will result in the achievement of a truly independent, professional and efficient HEC in all its joints and cadres.

3. The demonstrations helped and assist in the legitimate pressure on the political forces and parties, the government, the legislative, executive and judicial authorities to accept the correction of tracks and accept the positive changes, especially in the areas of ministerial reshuffle on the basis of efficiency and reduce the harmful effects of quotas in all its forms, and correct the paths of the state work to put it in the right context. Naturally as a servant and a state sponsor of the people and protects its interests and not the interests of parties and governing persons and powers holding power. In their view, the demonstrations in their pure and peaceful form are among the most important means of monitoring and pressure to achieve this and to secure the required reforms and achieve the desired goals.

4. We have already started the preparation for the national dialogue to review the system of government and the constitution in accordance with the constitutional and legal contexts.

The meeting reaffirms its appreciation and respect for the determination of young people, most of whom were at the height of their aspiration for life and their pride in what they have achieved. Also, policies and plans for building and development and changing laws to put the country and the people at the heart of the contemporary life of the finest countries. It is a movement that has renewed the will to change for greater reforms that can be achieved with such determination and leap.

Free peaceful demonstrators have managed to keep their movement peaceful. Their national will was greater than the intentions of malice who sought to distort the peaceful nature of the national protest movement, and who wanted this evil and evil country to slip into what God has preserved.

The statement concluded by saying,
let us make life together .. to enhance the victories of Iraqis;
May God protect Iraq

The Iraqi quartet meeting announced the start of the preliminary dialogue for the national dialogue and that the executive and judicial authorities have begun work in opening the investigation files on corruption, and start legislation for a new election law.
The meeting of the three Iraqi presidencies with the President of the Supreme Judicial Council that the peaceful popular protests is a legitimate reform movement, rejecting any security solution to peaceful demonstration, and severe accountability for any confrontation depends excessive violence.
The Quartet pointed out that it will be referred to the just and fair judiciary, who is found guilty of criminal offenses and from any party.
He stressed that the executive and judicial authorities have started work in opening the investigation files on corruption.
He also pointed to the start of work to legislate a new election law, which makes it a guarantor of justice.
Agencies 
Prime Minister Adil Abd Al-Mahdi attended a meeting at Al-Salam Palace in Baghdad with President of the Republic, Barham Salih, the Speaker of the Council of Representatives, Mr. Mohammad Al-Halboosi, and the President of the Supreme Judicial Council, Judge Fayek Zidan.
They acknowledged that the protests helped increase the pressure on political parties. They agreed that the executive, parliamentary and judicial authorities must work together to address the demands expressed by the protestors.
During the meeting, they discussed and agreed to: