President: We focus on important legislation to complete state building

President: We focus on important legislation to complete state building

[size=35]President: We focus on important legislation to complete state building[/size] 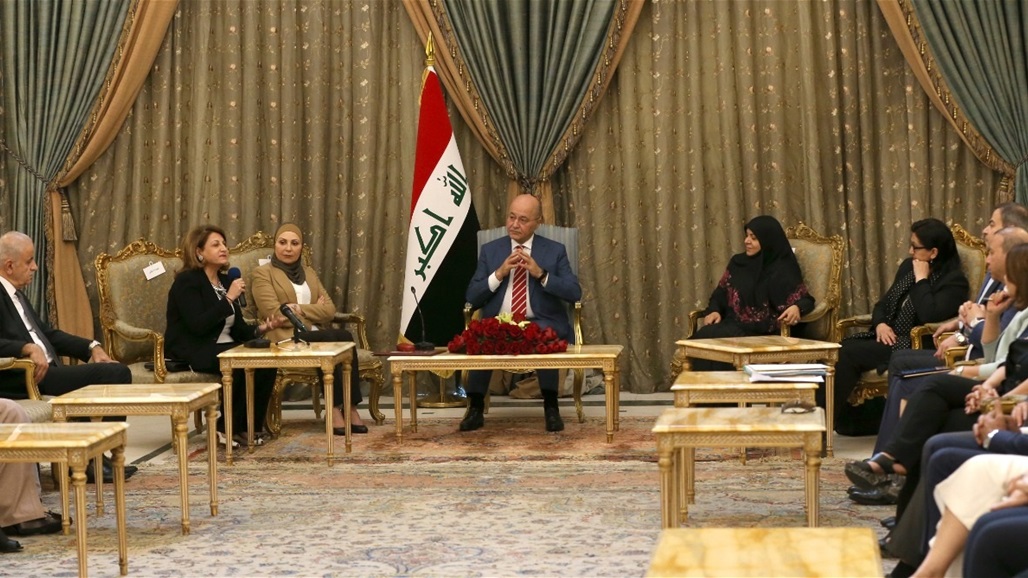 The President of the Republic Barham Saleh, on Sunday, that the preparation of the draft law against domestic violence comes as a result of many efforts and the participation and active participation of various circles in civil society and concerned with the rights of citizens in this country, pointing out that the government is focusing on important legislation to complete the state building.

The President of the Republic, during an extended meeting, held at the Peace Palace, Baghdad on Sunday, 15-9-2019, with a number of members of the Council of Representatives and concerned in the Council of Ministers and the Committee for the Advancement of the Status of Women and representatives of civil society organizations and specialists in women's and family affairs on the occasion of the end of the presidency of the Republic Preparing and sending a draft law against domestic violence to the House of Representatives in order to legislate, and received Alsumaria News, a copy of it, "The aim of the bill is to protect the family from violence that falls on one of its members from another individual, especially women, girls and children to ensure payment of harm to the family and against Being intersects with our values ​​only Social and religious and Quranic concepts that urged respect for women's rights. "


He pointed out that "the draft law counting domestic violence as a crime punishable by law and therefore is the abolition of all previous legislation permitting the practice of violence, such as the right to beatings and other," adding that "the draft law to form a high committee to combat violence from the relevant authorities and be headed by the Minister of Labor and Social Affairs She is responsible for the development of policies and programs that include appropriate measures to prevent all forms of domestic violence.


The President of the Republic that "the draft law provides for the formation of a general directorate in the Ministry of Interior called (Directorate of Family Protection) to investigate and investigate complaints of domestic violence as well as the formation of a specialized family court or more by the Supreme Judicial Council in the appeal areas to investigate cases of domestic violence" .
He stressed that "the draft law to grant the competent judge to issue a decision to protect the victim and deposited in security centers when it senses that there is a fear for her life and safety, and the project also committed the Ministry of Labor and Social Affairs to establish safe centers for victims of domestic violence throughout the provinces of Iraq and provide support and assistance to the victim by providing Treatment and psychological rehabilitation. "

He explained that "the draft law authorized the court to issue a protection decision as a matter of urgency during the hearing of the case to deal with the necessary cases, and encouraged reconciliation and compromise between the victim and the complainant by stopping the legal procedures for cases."

The President pointed out that "our country has gone through difficult circumstances and we have been exposed to many problems and perhaps we have priorities to combat terrorism, extremism and tyranny, and yet we have worked to provide a political atmosphere and understandings satisfactory to all parties, and we have satisfied ourselves with a constitution voted by the majority of the Iraqi people, and there is a fundamental principle in this Constitution and a fundamental separation One of the chapters of our Constitution, the second section, which talks about the basic rights of the Iraqi citizen, which is the essence of the social contract in this country, "noting that" the basis on which we must build our country. "

Saleh pointed out that "we have a new stage to complete the building of our country and harness its resources to serve our citizens and provide health, educational, educational and development services, and that the rights of citizenship and constitutional protection of these rights should be a priority before us in the leadership of this country," expressing his hope that " Domestic violence is a serious discussion by the members of the House of Representatives and that we lose focus on the need to recognize the basic principles and strengthen the necessary proposals.

He pointed out that "the current legislative chapter will be an important chapter and there is a permanent coordination with the presidents of the Council of Ministers and the deputies, and we want to focus on important legislation to complete the building of the state and the development of the educational and educational environment in the country, and achieve the desired economic transformation," stressing that "we will submit to parliament with the Prime Minister Jointly a bill of the Reconstruction Council which will be a major economic transformation in the country. "

On the other hand, the President of the Permanent High Committee for the Advancement of Women, Dhikra Alloush said, "This project is not only for Iraqi women, but for the whole family." She said, "We hope to start a new phase to support and support Iraqi women. The project" .

Prime Minister Hanan al-Fatlawi stressed that "the draft law does not contradict the principles of Sharia that honored women and their place in society," praising the "efforts and selflessness made in the preparation of this draft by the Presidency, and we appreciate the role of the President and his continued support for women's issues ".

"The completion of this project brought joy and joy to our hearts," said the head of the Iraqi parliament, Alla Talabani, praising the efforts of the president and the team that worked on the draft law.

"The phenomenon of domestic violence poses a challenge to the Iraqi family and its cohesion and harmony as it constitutes the cornerstone of society," said Haifa al-Amin, head of the parliamentary committee on women, family and childhood. "The draft law is one of the priority projects in the committee's work. We commend the efforts made by the president." To adopt this bill. "

On the other hand, the President of the Republic to "the existence of debate and debate on the creation of a ministry or a Supreme Council for Women," noting that the experience of the Ministry of Women was not successful to advance the reality of women, which requires a comprehensive government and social effort.

The President added that "based on the consultations, we have come up with an idea that will be developed with your participation, which is the introduction of the legislation of the Ministry of Women and Social Development Law, which requires the formation of a national council for women at the state level."