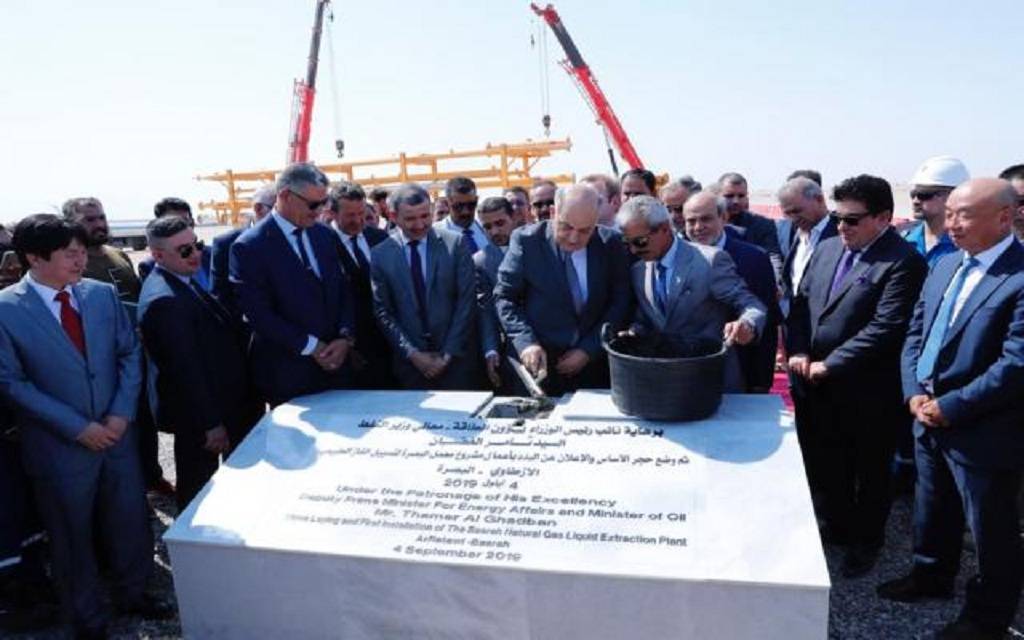 
Ghadban said, according to a statement from the ministry, on Wednesday that this project enhances the capacity of Basra Gas Company to invest 40 percent of the production of gas in the Artawi field to raise the company's production rates of invested gas to 1.4 billion standard cubic feet, per day.


The minister stressed on the way forward in the implementation of the ministry's plans to optimize the investment of gas associated with oil operations and reduce the rate of burning and waste energy to a minimum.


He pointed out that the project is one of the promising projects important to enhance the national production of gas to supply the national grid of electric power to achieve the generation (1500) MW, in addition to increasing the rates of production of liquid gas (LPG).


For his part, Director General of South Gas Company Hayyan Abdul Ghani said that the project is a new facility designed according to the latest international standards, consisting of two gas treatment units (acid).


For his part, the director of Basra Gas Company (Frats Club) explained that Basra Gas Company started the development and modernization of several facilities in the Basra Gas Company and in the storage and export complex in Umm Qasr as well as the cooling project for the LPG, as well as various improvements in Khor Al-Zubair and additional pressure stations Upstream gas and pipelines.


He pointed out (Basra Gas Director) that the new Basra liquefaction complex will include the construction of 14 compressor stations, more than 150 pieces of equipment, in addition to pieces of equipment used to measure compressed air and water treatment. Deputy Prime Minister for Energy and Oil Minister Thamer Al-Ghadhban confirmed on Wednesday that the ministry will press ahead with its plans to optimize the investment of gas associated with oil operations and reduce the percentage of burning and wasted energy to a minimum.
Al-Ghadhban said during the laying of the foundation stone for the project of liquefaction of natural gas complex (Basrah-NGL) in the province of Basra, according to a statement seen by the "economic news", "This project enhances the capacity of the Basra Gas Company to invest the proportion (40%) of gas production in Artawi field up to raise the company's production rates of invested gas to 1.4 billion cubic feet per day from all fields invested in the first round of licenses (Rumaila North, Zubair, West Qurna / 1).
He added, "The project is one of the promising projects important to enhance the national gas production to supply the national electricity grid to achieve the generation (1500) MW, in addition to increasing the rates of production of liquid gas (LPG), which in turn will contribute to achieve financial revenues through the export of quantities Excess domestic consumption, as well as reducing environmental pollution and substantially stopping gas flaring. "
"The project will support the national content that we always emphasize," Ghadhban said.

For his part, said the Director General of South Gas Hayyan Abdul Ghani, "The project is a new facility designed according to the latest international standards, consisting of two gas treatment units (acid)," noting that "these two units add 400 million standard cubic feet per day ( Mokmak) for the production of Basra Gas Company.
"The project also includes the installation of three new pipelines and extraction facilities (NGL) in addition to the rehabilitation of old facilities," Abdul Ghani said, pointing to the "significant environmental impact that the project will provide in the province, as the quantities of treatment in the project (BNGL) Will prevent additional amounts of carbon dioxide from entering the atmosphere. "

He stressed, "This project will help to avoid the release of greenhouse gases, by reducing the amount of burning gas," noting that "since 2013, the Basra Gas Company has been able to prevent the emission of nearly 70 million tons of carbon dioxide in the atmosphere." .

In turn, the director of Basra Gas Company Fratz Klab, said that "Basra Gas Company began the development and modernization of several facilities in the Basra Gas Company and the storage and export complex in Umm Qasr as well as the cooling project for the LPG, as well as making various improvements in Khor Al-Zubair and additional pressure stations This comes within the increased capacity of the gas to be added by the Basra plant to liquefy the gas, which is expected to start the first production unit at the end of 2021, followed by the operation of the second unit later.

He pointed out that "the Basra complex to liquefy the new natural gas will include the establishment of 14 compressor stations, and more than 150 pieces of equipment, in addition to pieces of equipment used to measure compressed air and water treatment."