The three presidencies held a meeting on Monday with leaders of the Popular Mobilization Units to discuss the recent Israeli attacks.

A source told "Al-Akhbaria" that "the three presidencies held, this afternoon, a meeting with leaders in the Popular Mobilization to discuss the recent Israeli attacks."

The meeting comes amid mounting public and political criticism of the three presidencies for their "silence" over repeated Israeli-US shelling of the PMU.


Iraq’s three  Presidencies held a meeting at Al-Salam Palace on Monday to discuss the political and security situation in the country and the region.


The meeting was attended by Prime Minister Adil Abd Al-Mahdi, President of the Republic Dr. Barham Saleh and the Speaker of the Council of Representatives, Mr. Mohammed Al-Halbousi.


The attendees were briefed by the Prime Minister and Commander in Chief of the Armed Forces regarding the recent bombing of weapons and ammunitions depots. All participants emphasized the importance of continuing various governmental programmes and responses to these events and condemned this flagrant and aggressive violation of Iraqi sovereignty.


The discussion at the meeting also stressed the importance of the government’s responsibility to protect national sovereignty and further strengthen defence capabilities.


The importance of national unity at this time between different political parties was also highlighted.


All participants committed towards working towards a safe, secure and sovereign Iraq. This sensitive and historical regional and international moment requires enhancing the unity of all Iraqis.


With regards to terrorism, it was decided that it is crucial not to allow division and diversion to attenuate great gains made against terrorist forces.  The participants declared the following:

(1) They respect the Constitution and all constitutional institutions, adhere to it in all circumstances, and respect the rule of law. Any encroachment on national interests or breaches of these laws will be handled according to policies of the Iraqi state.

(2) They are committed to the Unified National Policy, agreed at during the meeting of the leadership, which reaffirms the principles of neutrality, and rejects the idea that that Iraq will be a battleground or starting point of hostile actions against any neighbour.

(3) They support and deeply appreciate the heroic role of Iraqi armed forces and their various formations, the tireless work of the security and intelligence services in pursuing and chasing the remnants of ISIS, and emphasised the continuation of this important work to prevent Daesh from regaining any opportunity to rise or return.

(5) They will take appropriate precautionary measures to deal with future potential emergencies and mitigate consequences.

(6) They will follow-up with new agreements with the Global Coalition to help them fulfil their obligations towards the sovereignty, independence, security and safety of Iraq. 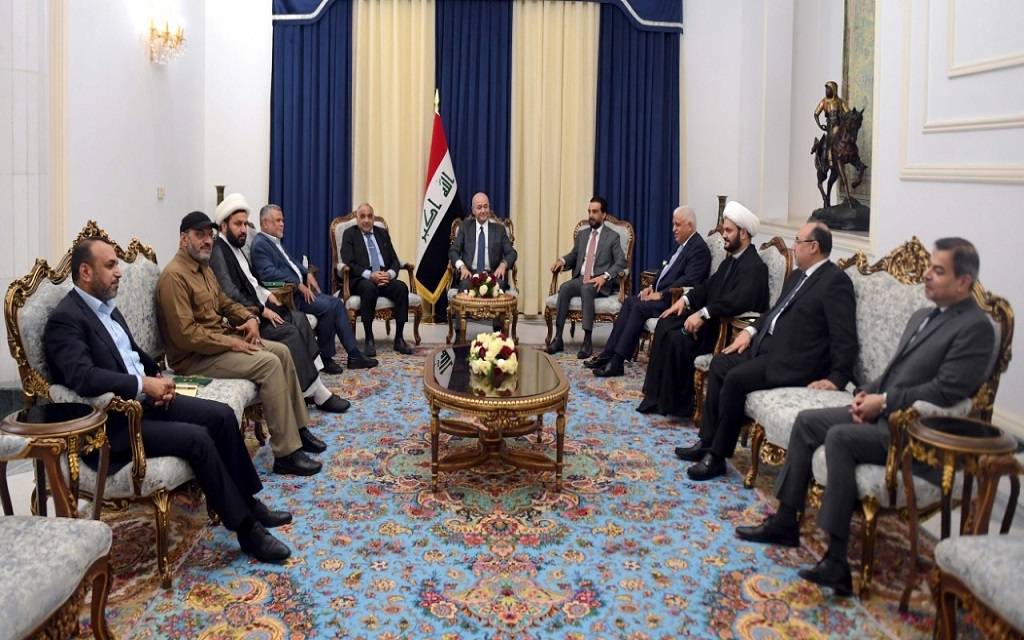 The meeting took place, according to a statement by the Presidency of the Republic of Iraq, at the Peace Palace in Baghdad, in the presence of national leaders to study the political and security situation in the country and the region, and the sites of weapons stores belonging to the Popular Mobilization were attacked, next to the country's air base (formerly pristine) in Salah al-Din province.

The officials were briefed on a report by the Prime Minister, Commander-in-Chief of the Armed Forces, on the bombings of weapons stores over the past few days .

The participants stressed the importance of following up the government's actions taken with regard to the available indications of external involvement in the attacks on the targeted warehouses, and condemned this sinful attack and flagrant violation of the sovereignty of Iraq.

Iraqi officials considered that the attack on the 45th Brigade of the Popular Mobilization in Al-Qaim an attack on Iraqi sovereignty, and that the martyrs who fell as a result of the martyrs of Iraq.

It stressed the support of the government in its actions to protect sovereignty and strengthen its defense capabilities, and to take all measures through all active channels and all international and regional organizations, which would deter aggressors and defend Iraq and its security and sovereignty.

The meeting stressed the importance of unity of the national ranks with its various political forces and components, and stand together for the security, safety and sovereignty of Iraq .


During the meeting, six items were agreed upon, most notably respecting the state's authority and adherence to it in various circumstances, adhering to the constitutional institutional context, observing the rule of law and considering any transgression on the state and its institutions as a departure from the national interest and a violation of the law and be treated accordingly and as required by the laws of the Iraqi state .

The officials agreed to abide by the document of the "unified national policy" agreed at the meeting of leaders, not to be dragged into the policy of axes and reject the transformation of Iraq into a battleground, and also refrain from Iraq to be the starting point for any aggression on its neighborhood .

It was agreed to support and value the heroic role of the armed forces in its various formations, and to work diligently for the security and intelligence services in pursuing and pursuing the remnants of ISIS, and to emphasize the continuation of this role responsibly to prevent them from regaining any opportunity to assemble or to rise and return until the final judiciary.

The presidential statement added that the national role played by the Popular Mobilization was referred to as an effective part of the national defense system and that it commits the orders of the Commander-in-Chief of the Armed Forces. Under the umbrella of the defense system, orders and follow-up commander-in-chief .

The agreement included taking the necessary precautions to deal with potential emergencies and face the consequences, and finally follow-up agreements and understandings with the international coalition to help fulfill its obligations to the sovereignty, independence, security and safety of Iraq.

Deputy: The meeting of the three presidencies witnessed a proposal to cancel the agreement with the United States and replaced with another with three parties

Deputy: The meeting of the three presidencies witnessed a proposal to cancel the agreement with the United States and replaced with another with three parties

Baghdad Today - Baghdad A member of the parliamentary security and defense committee, Mahdi Taqi al-Amli, on Tuesday, August 27, 2019, that the last three presidencies meeting with the leaders of the Popular Mobilization witnessed a proposal to cancel the security agreement with the United .States and the signing of an alternative agreement with three parties

The meeting discussed the security agreement between Iraq and the international coalition" and the Americans and the recent abuses on the headquarters of the crowd and the apparent .failure of the US side to protect the airspace of Iraq," he said

He added that "the meeting witnessed an explicit option to put the international coalition led by the United States or two possibilities, either to protect the airspace in Iraq explicitly or ".correctly or cancel the security agreement with Washington

He said that "the alternative option put forward is to sign an agreement with Russia or the ".European Union or Iran to participate in the protection of Iraqi airspace

The media office of the Presidency of the Republic, revealed Monday (26 August 2019), .details of the meeting of the three presidencies leaders of the Popular Mobilization

The Office said in a statement received (Baghdad today), "President Barham Salih, received at the Peace Palace, Baghdad on Monday 26/8/2019, in the presence of Prime Minister Adel Abdul Mahdi and Speaker of the House of Representatives Mohammed Halbousi, President of the Popular Mobilization Authority Faleh Fayyad And a number of leaders of the Popular " .Mobilization

He added that the meeting "underlined the importance of the heroic role played by the various Popular Mobilization Forces, along with the rest of our armed forces formations, in the ".battles of liberation, defeat of Daesh and terrorism

He said that the recent attacks against the Hashd are partly an attempt to drag the Hashd and the national defense system into a preoccupation with the continued important role of eliminating ISIS remnants and to eliminate terrorism and its dangers against Iraq and the countries of the region and the world. Strong and capable, "stressing that" Iraq will take through the government and through all active channels and international and regional organizations all measures that will deter the aggressors and defend Iraq and its security and " .sovereignty on its territory

The attendees stressed the importance of focusing on the primary objective of combating" terrorism and clearing the Iraqi land of its remnants and not being preoccupied with anything that would divert attention from this battle," the statement said. And that requires the unity of all Iraqis and the unity of the national position in support of its heroic forces, and respect for the rule of law and the emphasis on the authority of state institutions and adhere to .everything that enhances this role and preserves the security and peace and stability of Iraq