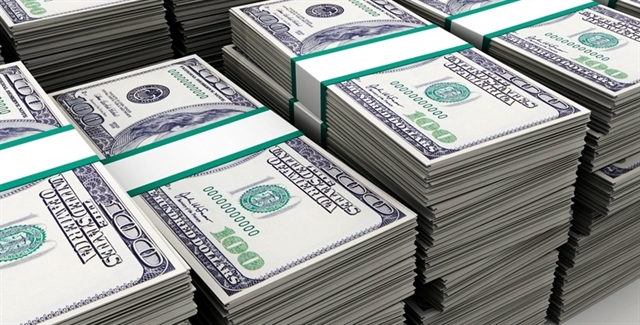 The sufficient foreign reserves have been a key source to support the central bank to stabilise the USD/VNĐ exchange rate. — Photo saga.vn


HÀ NỘI — Việt Nam’s foreign reserves hit a record high of US$68 billion at the end of June, revealed a report from the HCM City Banking University.

According to the report, foreign investment capital inflows have helped the country build up its foreign reserves to double the figure of three years ago.

The sufficient foreign reserves have been a key source to help the central bank stabilise the USD/VNĐ exchange rate, the report noted.

The reserves would continue to be used for active intervention to the monetary market, ensuring currency stability, which suggests the Vietnamese đồng is likely to see minimal volatility over the coming months.

Both international and domestic experts have forecast the đồng to remain broadly stable against the greenback over the near term, supported by robust FDI inflows and foreign borrowing by domestic banks.

According to analysts from Fitch Solutions, the đồng will weaken only slightly over the remainder of 2019. In a report released last week, the analysts also revised their 2019 average forecast to VNĐ23,300 per US dollar, from VNĐ23,440 per dollar in April, in light of the unit’s stability over the first quarter of 2019.

Meanwhile, analysts from Saigon Securities Incorporation said as that there are not many changes in the international market and the supply and demand of foreign currency in the local market is balanced, the USD/VNĐ exchange rate will remain stable, fluctuating at around VNĐ23,200 per dollar.

The đồng has remained stable against the dollar at around VNĐ23,200 per dollar since April and has averaged VNĐ23,250 per dollar in the year to date.

The experts attributed the stability to an expectation that foreign direct investment (FDI) inflows would remain strong in 2019. Given US-China trade tension is unlikely to dissipate in the near future, it is expected that businesses with supply chains concentrated in China are likely to continue diversifying across the rest of Asia. Việt Nam will continue to benefit from this shift in supply chains due to its investment and trade friendly policies, and its low cost, young and large labour force.

In the long-term outlook, Fitch forecast the đồng to persist on a depreciatory trend against the US dollar due to higher inflation in Việt Nam versus the US and the đồng's overvaluation.