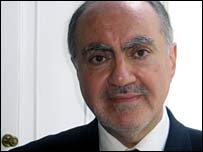 Mr Allawi has spent most of his life outside Iraq


He was Minister of Trade and Minister of Defence in the Interim Iraq Governing Council from September 2003 to 2004.

He was also Minister of Finance in the Iraqi Transitional Government from 2005 to 2006. He survived two attempts on his life.

In the end he became disillusioned with politics in Iraq and left government. He decided to write a book to try to understand why Iraq has ended up in its current condition.

"The Occupation of Iraq - Winning the War: Losing the Peace" was published earlier this year.
In it he says, "The situation in Iraq is complex, dangerous and fraught with poor alternatives. But it is not hopeless."

Mr Allawi is Shia and was born in Baghdad in 1947 but has spent most of his life in exile.
He first left Iraq in 1958. His family had been deeply involved in the politics of the kingdom but found themselves on the wrong side of the 14th of July revolution.

After the Ba'ath Party came to power in 1968 he knew a return to Iraq would be impossible. He opposed Saddam Hussein's rule from afar.

He went to school in the UK and graduated from MIT in the United States with a BSc in Civil Engineering.
After completing an MBA from Harvard University he worked in international development for the World Bank. He co-founded the Arab International Finance merchant bank in 1978.

In 1992 he founded the Fisa Group which manages hedge funds. Between 1999 and 2002 he was a Senior Associate at St Antony's College, Oxford.

A few hours after the attacks of 11 September, 2001, Mr Allawi predicted that the Americans would overthrow the Taliban; begin a 'war' on radical Islam and get rid of Saddam Hussein.

After his predictions came true, his hopes for a democratic, stable Iraq were dashed. He blames the "incoherence of the American 'project' and the incompetence of the new Iraqi political order."
In his book Mr Allawi offers some solutions.

He recommends some devolution of power to the regions in Iraq.

He also says some sort of economic and political integration is necessary in the region as a whole.

And he says independent authorities need to be set up to take charge of the reconstruction projects and security.